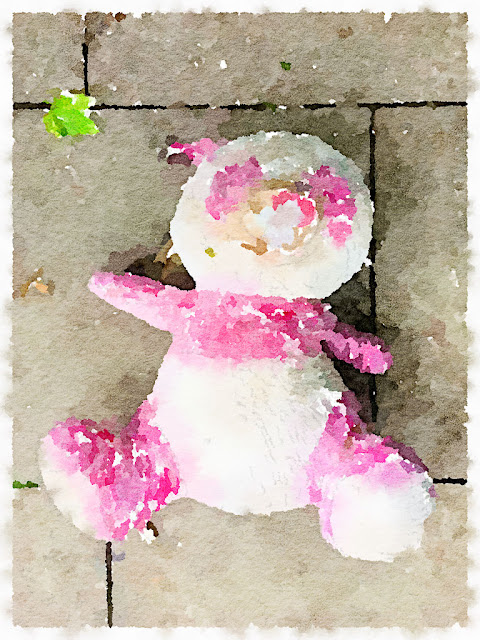 Several readers commented on the creepiness of the stuffed pink panda I found on the sidewalk and posted to the blog a few days ago. (The consensus seems to be that it was a dog toy.) I decided to run the photo through Waterlogue, an app that turns any picture into a watercolor painting. It's still creepy, but perhaps more artfully so.

Meanwhile, I was encouraged while walking on the high street with Olga to see this: 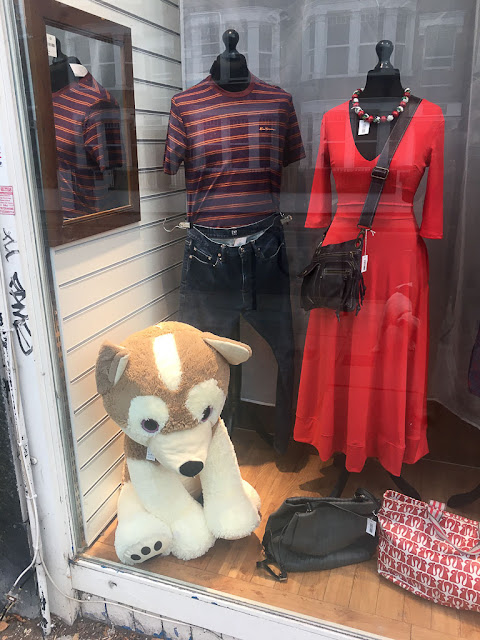 This is another stuffed animal from that same post, now given a prominent spot in the window of the charity shop where we last saw it abandoned in a plastic bag. (No word on what happened to its identical twin.) It's £8.50, in case you're interested.

There's your trivia for the day.

I spent most of yesterday removing departed patrons from our library computer system -- families that moved away, kids that graduated. For some reason, our system automatically imports new patrons, but the old ones have to be manually removed. It's a long, slow process because I have to look up each person, verify that they have, in fact, departed, and if they have no remaining siblings, also take out their parents (who automatically get library accounts along with their kids). It took me a couple of hours but it's sort of fun. It's the kind of work I can bury myself in and time seems to fly.

And fortunately, it's foolproof. If I accidentally delete someone who's still here, the system adds them back again when it updates against our enrollment records.

I still have to do the same for the Lower School, which has a separate library, so that will be my task for today. Fun times!
Posted by Steve Reed at 6:39 AM

My mind would have gone to David Cassidy after Shirley Cassidy. He is a sad case now but how I loved him.

Haha, you should have just deleted all on the computer system and let the system add the appropriate ones back.

That’s great that your system corrects itself (or you). “Oh, no, I’m sorry Mrs. Smythe. You can’t check out that book. You’re departed.” The watercolor is an improvement. 8.50 is an absolute steal for the plush dog.

You have the power to delete people - just like Vladimir Putin. I am very surprised that parents are allowed to borrow books from your library. That sounds like an unnecessary layer of extra hassle.

Andrew: David Cassidy IS dead, which makes him an especially sad case!

Mitchell: I'd LIKE to tell some people they're departed!

YP: It's not bad, actually. Many of the parents don't actively use the library, but they could.

Thats a heartening sight in the window. Hope it finds a new home soon.

I always like the way the charity shops, especially around London, dress their windows as though they are high street brands. Good to see at least one 'doggie' found his place in the sun. At least, for now.

Kudos to you for conscientiousness. A lazy person wouldn’t have worked very hard to see if the person was really gone, they’d just let the magic machine correct any errors.

Reminds me of last night when we were watching a documentary called "Being Evel" and I couldn't remember if Evel was dead or not. Turned out he was but only in 2007. I certainly wouldn't have guessed that after watching some of those old clips of his jumps over again.

I DID NOT KNOW THAT SHAUN CASSIDY WAS SHIRLEY JONES'S SON! What the heck. I was apparently living under a rock.

I'm very happy to see that doggie in the window - we have a soft spot for plushies in our house.

Finally, I would love that job too. It would feel very satisfactory to delete people from the system. Ha!

My mind runs just like yours, and I love it.

I had the same exact thought as Andrew- delete everyone and let the system re-enroll the actual enrolled kids.
What could go wrong?

It's good to see that many of us had the same thought... delete everyone and let the system re-enroll. Really what could go wrong? LOL.

I liked those types of jobs where the day flies by as you work on the computer. I don't think you could delete everyone because then you would lose the history of the current students/ parents, right?
That charity shop sets up a nice display window! I would shop in there.

Back in the days ,before I retired ,(1997) we were not computerized. The library did not use computers.

I kind of love how methodical your mind is, and the comfort you find in creating order in the world. I get it.

I was never a great fan of The Partridge Family or either Cassidy's music. I had no idea Shaun was involved in other things, too. I see he was a producer on American Gothic. I loved that show and hated it got cancelled after only one year.

Shaun Cassidy is 63!? My mind is blown. David, her step-son, died; he was my big crush on the Partridge Family.

I thought David Cassidy died. Off to Google...

I love that the stuffed pup was rescued to the charity shop. The watercolor of the savaged pink bear is a little better than the first grim shot. It has softened that wound.
Have fun with your deleting project!

If I hadn't seen the original photo of the pink bear, I wouldn't be able to really tell from the watercolour version that it's face was destroyed, so that's a win, in my opinion :)

David Cassidy was one of my first celebrity crushes. The other was Donnie Osmond. lol

Maybe the second stuffed dog toy was inside the shop; did you go in? I'm glad one (at least) was in good enough condition to be displayed. It looks very good in the window!

*its* face - its its ITS!!!
I knew better! Sometimes the brain misfires, though :)

GZ: I hope so too! I was afraid they'd just get thrown out.

Mary: We are known for our excellent charity shops here in West Hampstead! There are four or five, at least, on our short high street.

Marty: Well, there are minor consequences for wrongly deleting people, as I'll explain in my next post. :)

Ed: Oh, yeah, he was such a thing back in the '70s. I remember everyone talking about him when I was in elementary school.

Bug: Well, there you go! You learn something new every day! I'd mail you the plushie if it weren't so large. :)

Ellen D: You are exactly right! Gold star! We'd lose everyone's checkout history if we did that.

Red: Oh, I remember those days. All those book cards and card catalogs!

37P: I guess it's better than enjoying chaos!

Kelly: I didn't listen to the Partridge Family's records but I liked the show, and I liked Shaun Cassidy in the "Hardy Boys" series. I was never really smitten with him but I remember lots of my contemporaries were.

Debby: He did! Shaun is still alive, though.

Sharon: I thought it would be fun to make a watercolor of an unappealing picture, just to see what happened. :)

Jenny-O: I did not go in! But yes, I think it's entirely likely that the second one was in the store.

Love a foolproof system, though it does sound like a bit of a tedious task. That waterlogue still looks creepy -- but yes, more artfully so!