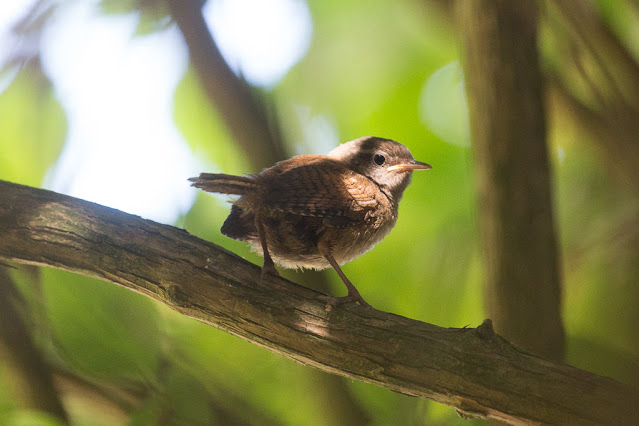 I believe this is a baby wren. It was sitting in the hedge in our garden making a persistent (and surprisingly loud) peeping sound, as another bird flew in and out probably hunting bugs. Here's the other one: 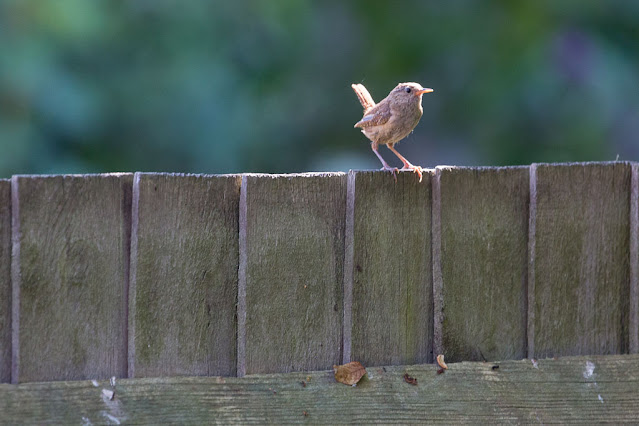 That was the best picture I could get, and it's a little blurry, but that bird never slowed down. I think it was feeding the first one.

Well, somehow I made it through yesterday. As usual when I return to the UK from the states, I tried not to go to bed until my normal time. So even though I got no sleep on my overnight flight, I stayed up all day and didn't hit the hay until about 10 p.m. As a result I feel pretty normal this morning. I always find it's best to get on schedule right away.

I spent yesterday getting stuff in order around the house and catching up with garden care. Although Warren watered, he missed some areas and didn't do anything like dead-heading or trimming, so I puttered around and did some of that.

I also watered the Russians' balcony plants, most of which seem to be hanging in there. Mrs. Russia told me via e-mail that her son is returning to the UK today to prepare for his school exams, known as GCSEs, and he can handle the watering from here on out. Yay! No more climbing the ladder!

You can see that the sunflower and the zinnias bounced back from their withered state, which I showed you yesterday. They're very resilient plants.

Apparently there may be an official declaration of drought by the government today, which could lead to further water restrictions. I'm trying to be careful to water selectively, but I'm still using the hose, because as far as I know that hasn't been banned yet.

I tried to catch up on blogs yesterday, but I noticed that many of my comments to other bloggers seem to disappear -- probably going to spam. I try to check my comment spam folder every day. It's amazing how many perfectly good comments wind up there!
Posted by Steve Reed at 6:34 AM

I'm glad you no longer have to climb the ladder. I hope your water restrictions aren't too severe when they happen. You may have to start bucketing your bathwater out to the garden.

Your photo from the plane looks more like Australia than England. I hope you get relief soon.

Apparently you are all over the tabloids in Russia! Russian peasants appear to find it hilarious that a Yank has had to climb a ladder to water an absent Russian family's plants. The story has even cheered up Russian soldiers in the Donbas region of Ukraine.

It is good to see a wren. They are suffering this summer.
And the sunflower has perked up!!

Hosepipes will be banned, but watering cans should be ok for now.
I fill our waterbutts from the tap when the rainwater has finished and don't use that for 24 hours to let the chemicals evaporate.
It's looking like we may get a hosepipe ban too. Anything that isn't food is having to tough it out, and things in pots are getting the minimum to keep them alive. Putting pots in groups helps conserve water too.

Isn't it a day recovery per hour difference with jet lag? I know that is so going East, not sure about the other direction.

Yes on recommending bloggers check their comment spam file. I routinely find your comments in there. And I suspect my own are doing that in other people's blogs.

Nothing louder than a hungry baby wren. Except a nest full of them. One of NY favorite birds, so sorry too see the farthing go, with its wren graphic. Supposedly tiny bird for tiny coin!

My favorite, that was. Insistent, I mean, predictive text often shoves NY in uninvited!

It's always pleasing to see how quickly flowers like zinnias bounce back. As for the Russians... oh, never mind. Hope you continue to readjust easily. So happy to be traveling in the same time zone.

England looks so parched, as was shown on the news last night...from a good distance up, all beige. Glad there are still some birds about. And it's a wonder your zinnias and sunflower were just waiting for you to come home (and water them!)

I am always so amazed and impressed at the sound that comes out of such a tiny birds mouth. We have house wrens and I love them. Glad your plants survived and that the Russian watering is coming to an end. I love Mr. Pudding's comment:)

Good news on the watering upstairs front. Bad news on the drought. Having lived in California during one of its many droughts, I remember the restrictions all too well.

I, too, check my comments and that Spam folder every day and there always seems to be at least one or two in there that I can set free and publish.

I, too, check my spam folder daily now. Part of the routine.
Sigh.
I surely hope that the Russians bring you some sort of gift for all that watering. A giant bottle of the best Russian vodka would be suitable, I think.
Has Olga gotten over her snit? I hope so.

I don't water much anymore but I don't have the gardens you do. I have 3 pots that I water but I am leaving the rest to nature. The grass and plants usually come back once it gets cooler and starts raining again. I am a bit cheap and don't want to raise my water bill if I can avoid it.

It's so hard to imagine drought conditions in England, and yet it is happening. I hope you get rain there soon. Nice that your neighbor's son is returning to the UK. It'll be good to just be able to concentrate on your own garden for now.
Adorable little baby wren there.

Ya gotta be tough these days to make the international flights.

I agree with Ms. Moon.... it would be nice if the Russians brought you a little souvenir (bottle of vodka) for your efforts.

I don't see wrens often, so I really enjoyed your photos.

I've gotten into the habit of checking the spam folder every day too. There is always one or two in there. That sunflower really did bounce back quickly.

I had no idea there was a spam folder though I do mark spam comments as spam. I wondered why my comments were down. Though I do get most via email so I have seen most of them even if they didn't get published on my blog. I'll have to start checking that every day.

We're finally getting a good hard rain that has, so far, lasted more than 10 minutes.

I’m finding most of yours in spam and return them ASAP.

I agree with you. That first wren looks like a relatively new fledgling and the second one appears to be its mother, judging by your description.

I agree about the way to avoid most jet lag. Korea and Thailand were the killers though. We've had one rainy day and that was it. Thankfully, we had a higher than normal snow pack in the mountains.

If that IS the parent wren, the poor thing looks exhausted!!

I'm not finding too many comments in spam although I check regularly. What I AM finding, though, is double comments - some will show up in the regular way and appear in the spam folder too. The exact same comment. I don't think people are leaving two identical comments each time. Maybe this is Blogger's "fix" for the problem. Well, it wouldn't surprise me if it is :)

River: Yeah, that's a definite possibility, although how I would capture water from our shower I'm not sure!

Merlot: It FEELS more like Australia too! (At least, I think so, having never actually been to Australia.)

YP: I'm glad I'm doing my part to lighten hearts in that conflict, though I'd rather lighten the hearts on the other side.

GZ: I'm amazed how well that sunflower pulled through. I can manage watering with a watering can if need be, but things are going to look pretty rough around here.

Boud: I have a farthing somewhere in my erstwhile coin collection. Wrens are surprisingly loud!

Mitchell: Yeah, traveling with no jet lag makes a HUGE difference, doesn't it?!

Barbara: I still see lots of birds and, surprisingly, bugs. They seem to be managing despite the drought.

Pixie: Yeah, thank god that kid is coming home. I have pretty much had it with that task.

Bob: Yeah, I get one or two or three legit comments in spam literally every day.

Ms Moon: Wouldn't THAT be nice?! What I really hope is that son manages the watering so the plants don't die before everyone else gets here. After all my hard work I want them to stay alive!

Ellen D: I don't worry about grass, trees or large shrubs. They'll all be fine. It's just the smaller plants that need assistance.

Robin: Yeah, we definitely have plenty to keep us busy downstairs, regardless of what's happening on the upstairs terrace.

Red: Jet lag is a pain but it passes quickly enough.

Kelly: I'll definitely let you all know if that happens!

Sharon: Yeah, at least one literally every day.

Ellen: Yep, that's no doubt where they're going!

John: It's weird that mine seem to go to spam on so many people's blogs. What does Blogger have against me?! LOL

Margaret: Yeah, there's really no way to easily adjust to flying to the other side of the planet!

Jenny-O: That's weird. Maybe you already know this, but when you look at the comment list on the dashboard of Blogger, all comments will appear under ALL, even those allocated to Spam. But the spam comments won't actually appear on your blog unless you go into the Spam folder and release them. If that makes sense.

Okay, that explains it. I used to have comments set at "Awaiting Moderation" and find additional ones in Spam. Now it's set at "All Comments". Thanks for that! I didn't notice I had changed it. Honestly, I feel like a klutz some days :)

I check the spam folder all the time. I can't figure out how blogger can't get that right! Glad you are off the hook for Russian watering -- and that your garden made it through!

For some reason, every single one of your comments ends up in my spam folder. I keep thinking it will learn that I don't consider you spam but it hasn't happened yet. I'm guessing it has something to do with the embedded comment bug since I still have embedded comments.