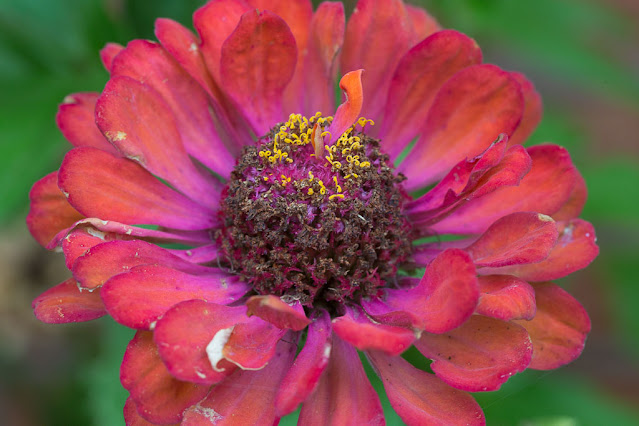 The zinnias in our garden have reached that tattered, slightly moth-eaten stage, but their colors have grown richer and more interesting. A single flower can hold a spectrum of shades. It's another sign that we're slowly sliding into autumn.

It's raining right now, more steadily and heavily than I expected given the forecasts. It's amazing how much of a difference that single heavy rain last week made. Watering the dry earth evenly, as opposed to just spot-watering with a hose (which is now temporarily illegal), gives all the plants such a boost. So I'm glad we're getting more rain.

This also means I won't have to walk the dog. There's no way she'll go out in this! 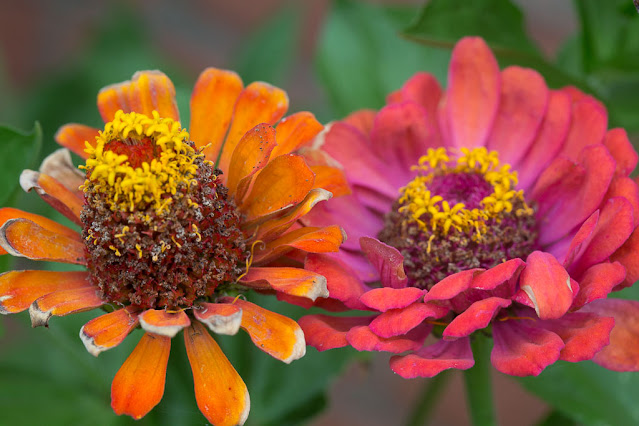 My bites from the insidious flower bugs are doing much better. I think yesterday was the first day I wasn't conscious of itching. Instead I was conscious of freezing -- the air conditioning in the library was modified over the summer and now it's almost TOO effective. And apparently there's some snafu where the maintenance folks aren't able to adjust the thermostat -- they're working on that now.

Some of you said you wouldn't mind hearing about the work stuff that's occupying my mind at the moment, but trust me -- there are no good stories yet. Not until the kids show up. Right now it's all about putting things in order, building displays, editing our policy manual and other administrative stuff. BO-ring. 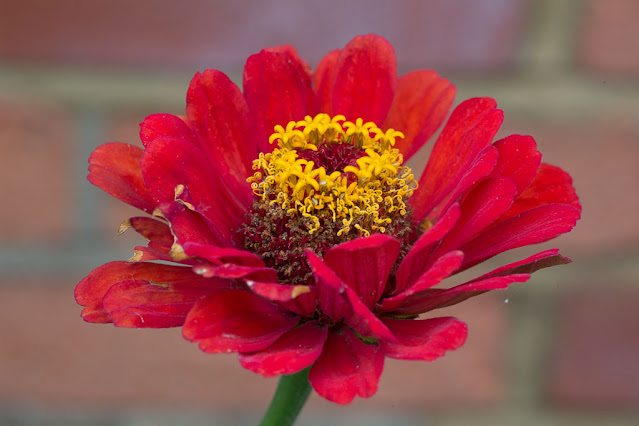 Mrs. Kravitz has been outside with a gardener -- sometimes a couple of gardeners -- issuing orders about trimming plants and moving bushes and god knows what else. Yesterday she borrowed three yard waste bags so she could throw out all the stuff she's clearing from her garden. I don't know what's possessed her, especially at this time of year and in these generally dry conditions. We've pretty much let the garden go gently and naturally on its downward seasonal spiral.

We do need to get some tree-trimmers to come and cut back the overhanging branches of the Philadelphus and hazel and to thin out the canopy of the walnut. I suppose I should get on that.

Although the Russians' teenage son is allegedly living upstairs, and watering their terrace plants, I never see that kid. I very occasionally hear him going up or down the stairs, but that's all. I suspect he lives on the top floor with the blinds drawn and plays video games all day. I'm not sure what he eats. Presumably his parents are in touch with him. They're coming back tomorrow and their plants are still alive, so my sense of responsibility is fulfilled.
Posted by Steve Reed at 6:47 AM

I'm surprised your bug bites are still healing, is it usual for them to last this long? Could you have had a mild case of some infectious disease instead? Was there any preceding headache or mild fever?
Some flowers look interesting as they die, others just look sad and droopy.

That’s me! An old zinnia.

Mrs. Kravitz borrowed three bags? Will she return them when done?

Isn't the rain great? Unfortunately I shall have to go out dog walking as he won't do " business" in the garden...and wouldn't go in the garden anyway in this downpour! He will have to be dragged out with his mac on!!
I have had insect bites that have itched for days on end too.Did you try the heat treatment?

I love those zinnia colors!

Maybe your neighbours have brought you back a Faberge Egg as repayment for your watering efforts. Young men in a room of their own will do more than just play video games. Is not serious tree trimming the responsibility of your landlord? It is quite nice to walk out from a strongly cooled building into the warmth.

Do you save the zinnia seeds to replant next year? I'm wondering if that works.

We've got a gray rainy day going on outside and those colors are just what I needed!

My zinnias are looking pretty worn as well and after this rain, waterlogged. Got more yesterday and supposed to get some today. The thing about plants and rain is that it's not just that all the ground gets soaked instead of just the part that got watered, it's that they much prefer the quality of rain over our tap water that's been chemically treated.

I've heard that if you cut the zinnias they'll be more energetic in reblooming. They are cheerful flowers to being inside.
You have some interesting neighbors. "Interesting" as in "WTF?"
I suppose we all do.

I will definitely plant some zinnias next year because they seem like a hardy flower that blooms for such a long time with not much care.
I loved working in the school library and setting up displays and getting ready for the students. I've been thinking about volunteering again in the elementary school near me if they are allowing volunteers in the library - just to shelve mostly. I used to love that...

Russians eat a lot of soup. Light soups and stews based on water and vegetables, such as svekolnik. Noodle soups with meat, mushrooms, or milk. Soups based on cabbage, most prominently shchi. Thick soups based on meat broth, with a salty-sour base like rassolnik and solyanka.

I am so glad you are getting rain there. Everything in the garden is going to love it. It's nice to see all the colors of the zinnias.

for plants summer is winding down. Their activity is slowing down.

What luscious colors on those zinnias!
That air conditioner problem sounds very annoying. I bet I'd have to wear a coat and scarf to survive in there right now.

Interesting to see zinnias as colorful when they're fading. My neighbors love them so there's a display every year.

Zinnias are one of my favorites (I think I say that about all the flowers - ha!). Mrs. Kravitz reminds me of our neighbor in that it feels like she always has to be DOING something. In the case of our neighbor, she's in her 60s/70s and cares for her mother so I think she has to get out of the house.

Seems like the Russians have been gone forever! Did you ever tell us where they were going?

Rain is always so much better than watering.

Those are some very powerful bugs. The rain can be nice at giving us a respite in our watering and walking, although I still walk in the rain. I don't have a dog to dissuade me!

@ YP: Have you been at the online encyclopedias again?? lol

@ Steve: Those were some long-lasting bug bites; hopefully you never have that happen again. Mitchell's comment about the yard waste bags reminded me of my mom's story about students in her classroom always asking to "borrow" a tissue. She'd tell them no, but they could "have" one ... no need to return it :)

Reminds me of a couple who lived next door to me back in an apartment complex many years ago. I hardly ever saw them. But whenever they left in the summer on vacation (I would see them loading their van up with bags from their parking lot patio door), there would be a constant stream of traffic of teenagers visiting their daughter who had remained behind, up until a half day or so before they returned. I always presumed they had no idea that their daughter was having the time of her life while they were away.

I'm with Mitchell...an old zinnia: a bit frayed at the edges and a bit faded, too.

I’m intrigued by your neighbours

I love zinnias in all their stages of life. The buds are interesting, the blooms pretty, even when fading. Just took a bunch of zinnia pix today, in fact! Couldn't resist! I'm glad you are getting a little more rain. It sounds sorely needed and will save hauling the water, too!

Zinnias are one of my favorite flowers. Your photos captured the colors perfectly. Good luck in school when the students return!

I know Zinneas by their nickname of "Old Maids", known as 'old-fashioned flowers grown in well-loved gardens by genteel, unmarried ladies of a certain age'. :) They are also notorious for being a “dirty” flower (does that make them dirty old maids?), soiling their water in a very short period of time, my mom always adds some bleach or chlorine to their water. Yet another name is "Cut and Come Again" because the more zinnias are cut for bouquets, the more flowers they produce. Regardless, I love them!

Your floral photos are exquisite!

River: It's not usual for most bug bites to last this long, but apparently bites from these flower bugs are known to be particularly long-lasting. (According to the NHS web site, anyway.) I didn't have any other symptoms.

Frances: I applied both heat and cold. Both work, I suppose by stunning the nerves, as you (or someone here) mentioned. Olga doesn't like to go in the garden but she'll do it.

Jennifer: Yours should be doing the same, I imagine?

Ventana: Gracias! Glad you liked the photos and the colors. :)

Andrew: It is our landlord's responsibility. What I'll probably do is get an estimate and ask them if we can deduct it from our rent.

Colette: I did that once and it didn't work. I don't think the seeds were fertile, or maybe I stored them badly.

Bob: But gray and rainy sounds nice too!

Ellen: I'm sure that's true, that they prefer rainwater.

Ms Moon: I'm sure that's true but I hate to cut flowers. I feel sorry for the plant, trying so hard to reproduce!

Ellen D: Shelving IS fun. One of my favorite jobs. You have to be the kind of person who enjoys organizing.

YP: Well, thanks for the tutorial, but somehow I can't imagine this kid whipping up a pot of rassolnik!

Robin: Yes! The rain is such a relief.

Red: Definitely. Some of our plants have already died back. Apparently in an exceptionally dry year they'll go dormant early.

Sharon: I cope with it better than my co-workers. One of them has a heater running under her desk!

Boud: They are reliable flowers, that's for sure.

Bug: That's exactly how Mrs. K is. She can't leave anything alone.

Kelly: I think they went back to Russia, though I can't remember if they told me that or I just assumed.

Margaret: Good for you! That's dedication!

Jenny-O: Kids in the library often ask if they can "rent" a book. I say, "Are you going to pay me for it?"

Ed: I always think parents in those situations MUST know. How could they not?! In any case, this kid has had no visitors. I'm not even sure he's still alive up there.

John: I am too! I'm a bit concerned, actually.

Jeanie: They continue to be pretty into the fall, when they turn even more brownish.

Michael: Thanks! That doesn't happen until next week.

James and Brigitta: I haven't heard any of those nicknames before, so that's interesting! I suppose I should cut ours so we get more blossoms, but then I wouldn't get to see the flowers age.

Stunning color in those photographs! Now you have me making up a whole story about the never seen Russian kid on the top floor.