The Green, Green Grass of Home 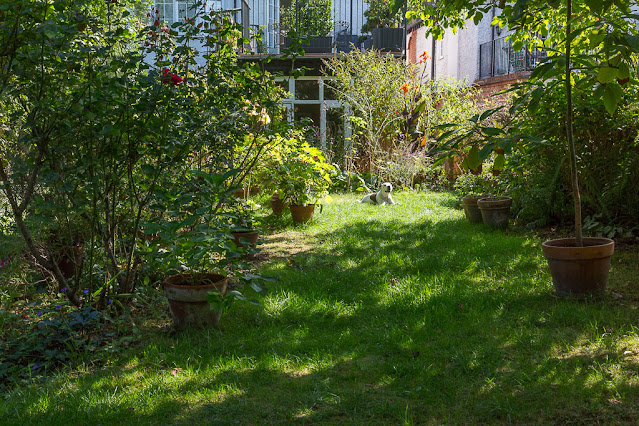 Look how well our grass has come back after just a few days of rain! Not only did it turn green again, it began growing like crazy. I had to get out the lawn mower yesterday for the first time since the beginning of July.

Above is the "before" picture... 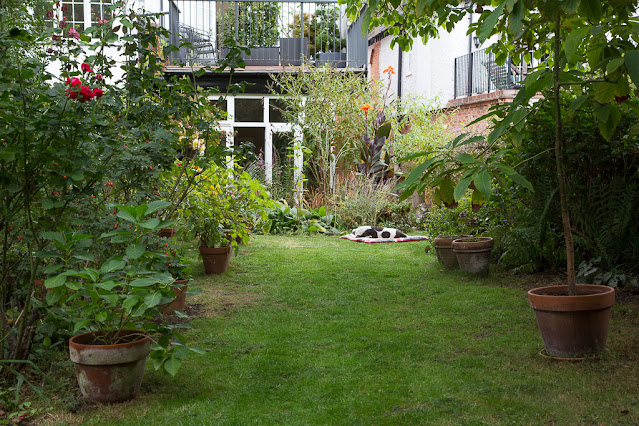 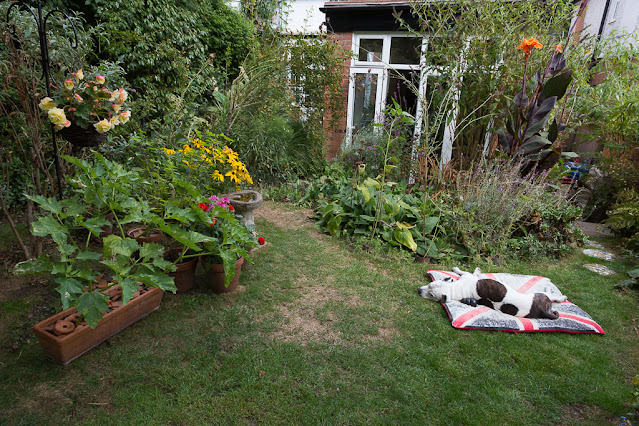 There are still some patchy brown areas, but they'll recover. I'm not a fanatic about the lawn anyway.

I caught up with the Russians yesterday. Mrs. Russia did indeed bring me a present for watering their plants -- a Turkish summer blanket. (Apparently they've mostly been in Turkey this whole time, not Russia, although Mrs. Russia did go to the homeland briefly.) Within hours they were working on yet another home improvement project, pulling up the decking on their terrace, and they're also going to have some people come and fix the roof and replace windows in their upstairs flat, which is going to necessitate the construction of another scaffold on our patio. Things sure were peaceful while they were gone.

I finally finished "The Wych Elm" yesterday. I thought it was good -- one of Tana French's better books -- but it did go on too long. It's more than 500 pages, and by the time I got to the end I was practically gasping from the exertion.

Has anyone noticed that commenting problems with Blogger seem to have improved? For the last several days I've had no legitimate comments going into my spam folder. I wonder if I've just been on a lucky streak or if Blogger somehow sorted out that problem.

Problem gone here as well as the annoying ones that I send to the trash before they get seen.
Grass is amazing- grows anywhere and everywhere, dormant and dried up and then SPROING back to life after a decent rain. Grass is a weed.

A Turkish summer blanket! Just what you have always wanted! Still, it was nice of them to remember their American manservant. I bet you can't wait for the knocking and banging to begin. There's no place like home.

I'm no lawn fanatic either. With the amount of moss in ours we'd have to dig it up and start again. I don't see the point. As long as it's green and the birds come digging in it then I'm happy.
Do you have your comments settings to google accounts only? Some people are still having to comment as anonymous on mine.

That's nature for you. Our playing field just up the road was a lovely shade of mustard and within a couple of days of rain it was green again. Wish we regenerated like that after a drink of water, lol
Briony
x

It's always such a good surprise when grass revives after you thought it was done for. About comments: yours are still going straight to spam and needing to be rescued.

The garden looks beautiful. The brown spots must have been real grass. Weeds are so much more sustainable.

A Turkish blanket. Ho hum for all your effort.

It doesn't take much for grass to come back, as we see most years

Yes, the Blogger comment issue seems to have been fixed. Nothing legitimate in my spam folder for a few days.

As someone who comments, but doesn't have a blog, the issue of commenting has shifted a bit, but is not fully resolved. Some blogs are fine; no problem commenting on. Others still require me to jump through hoops (where in the end I sometimes must comment anonymously even when signed in to google, so I usually just add my name at the end). However, there are others where I can only occasionally leave a comment as sometimes blogger won't even give me access to an anonymous option (YP, this happens a lot on your blog). So commenting is still a bit of a challenge. Not that I think my comments are earth-shattering, but I do like to acknowledge the efforts of bloggers I read.

No, you must just be lucky; comments, even from frequent visitors, going into Spam is still happening and, in fact, the comment you left for me the other day on Albania travel had to be retrieved from Spam.

We did the lawns yesterday and sat outside after; there is nothing like the smell of freshly cut grass.

Your garden is certainly beautiful.
And, uh- what is a Turkish summer blanket?
Your upstairs neighbors are busy little bees, aren't they?

You do have a lovely garden. I finally got out there with the trimmer and whacked back the weeds that were mid calf high having shot up after our rain. I have to use the trimmer because the lawn mower won't go through the gate so I'm glad it's a relatively small area.

I hope you show us a picture of the Turkish blanket.

Lawns are pretty resilient and I'm glad to see yours is still alive and well. Olga appears to enjoy it whether it's cut or not. Good for Mrs. Russia for bringing you back a thank-you gift!!

Isn't it amazing how quickly things turn around with a bit of rain. We had 3 good days of rain, and it seems like the world has heaved a big sigh and begun to return to life.

I love seeing the green lawn there after a few days of rain. It looks great and Olga loves it too!
It's nice that the Russian neighbors brought you a gift. I wonder why they were in Turkey.
There are some blogs that let me comment and others that make me sign in again.

It looks like your garden is doing well. We haven't got much grass, but what we have got is pretty brown at the moment.

I did notice that Ellen Abbott's comments had started posting correctly - they were showing up in spam for a while there.

I'm just going to reiterate what I always say - your back garden looks like such an oasis!

Your comments have regularly arrived in my spam folder, up until about a week ago. I haven't pulled a single comment out of spam since. It is about time!

I can't help it but every time you blog about "The Russians", Warren Zevon's "Lawyers, Guns and Money" plays in a loop though my head. "How was I to know, she was with the Russians too."

I think we need a photo of the Turkish summer blanket. :)
Did you see my comment 2 days ago about 84, Charing Cross Road? It is a book I just finished and I thought of you while I read it wondering if the addresses mentioned were near your home...

I noticed that spam issue appears fixed (knock on wood) too. I haven't had any problems for about a week now.
I love the look of the garden. It looks like a great place to be outdoors.

I am gobsmacked by your proper English garden! So is Olga apparently. And, um, the story I'm making up about your upstairs neighbors continues, with this construction effort playing right in, and you and Fred the unwitting stars. I'm chastened to realize I am trafficking in stereotypical movie tropes. Apologies.

The lawn looks great; there is still hope for mine! My parents, who traveled extensively after dad retired, loved Turkey.

Grass in the northwest looks awful in the summer. Ours browned out, we thought it would die. It's recovering, waiting for it to cool down. There is still no rain in the forecast.

I'm still having trouble leaving comments, often needing to click on "Sign in with Google" before I can go further, and often needing to click outside the blog and then return to it before the cursor will blink to indicate I can now type my comment. It's a pain, but I was assuming it's mostly because I use Firefox. It doesn't happen so much with Chrome but all my bookmarks are in Firefox and I just can't be bothered switching between browsers. It's pathetic how lazy I am, I suppose, but when it was working fine and now it's not, it seems like so much more work to cope with it! As for comments on my blog, I haven't posted for two weeks so I don't know if the troubles there have disappeared - I hope so.

Your grass really did bounce back! Does the mower bother Olga? She doesn't look bothered :)

Our lawns are so resilient. If only we could pop back like that!

Linda Sue: Grass IS amazing. Why do people think it requires so much care?

YP: It was nice of her to bring me anything!

Tasker: That's how I feel -- as long as it's green, it's fine! I have my blog set so it doesn't allow anonymous comments.

Briony: It's remarkable how fast it happens!

Boud: That's strange. I haven't had any in spam for about a week.

Mitchell: As Tasker said above, as long as it's green, I'm happy!

Andrew: I wonder what the snafu was? And if the problem is truly solved?

Mary: Strange that it affects some people worse than others, apparently. I'm told a lot of my comments on others' blogs were going into spam. I have my blog set not to allow anonymous comments.

Rachel: Maybe they're making the fix but it takes a while to kick in? Weird. It's definitely better for me.

Bob: It's a nice smell and a good look!

Ms Moon: A Turkish summer blanket is woven in Turkey, which apparently has a big textile industry, but is not necessarily Turkish in design. As you will see in my subsequent post. :)

Ellen: It's amazing how fast weeds will grow!

Kelly: It was very nice of her!

Debby: I wish we had three days of rain here. We could use it!

Robin: Turkey is a popular vacation destination, actually. It's pretty inexpensive and it has some good beach resorts and historic sites. Also, a lot of people go there for cosmetic surgery!

Nikki: A little water will turn it around right away. It's surprising how quickly it recovers.

Ed: That's not a bad association. It's better than picturing Nikita Khruschev!

Ellen D: Picture in next post! I LOVE "84 Charing Cross Road." One of my favorite books (and also an excellent movie). Not particularly close to our house, and nowadays many of the old bookstores that used to line Charing Cross Road are gone.

Sharon: I love going out and sitting on the bench and reading.

37P: The Russians are certainly worthy of fiction. I couldn't make up a story better than they are.

Margaret: We've only been to Istanbul but it was fantastic. I'd go back. (Even though I got ripped off by an aggressive taxi driver.)

Allison: I think it takes a lot to actually KILL an established lawn.

Jenny-O: Ah, Firefox! I hadn't even considered the possibility that other browsers might cause some of these problems. I use Chrome myself.

Jeanie: I'm glad this situation appears to be resolving itself!

Your garden is looking lovely, I hope that doesn't get spoiled when the construction upstairs begins. I wouldn't even begin a book that was over 500 pages!