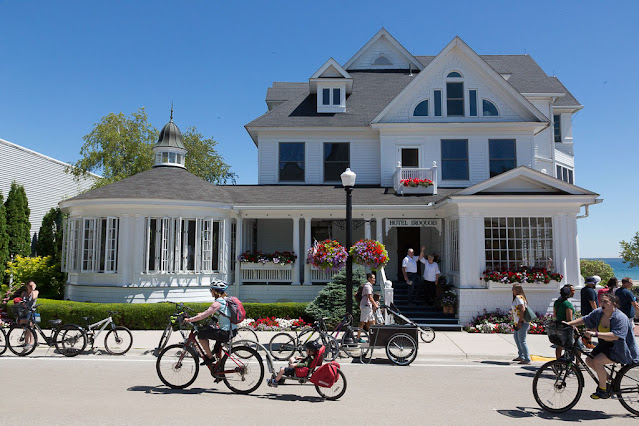 Yesterday we spent the whole day on Mackinac Island, where the upper and lower peninsulas of Michigan meet near the junction of Lake Huron and Lake Michigan. It's a popular holiday spot, particularly in the summer, and the only way to get to the island is by ferry. (Well, there is a small airport, but I think it's for private planes and we are not those people.) Cars are prohibited, so everyone on the island travels by foot, on a bicycle or by horse-drawn wagon. It all feels very Gilded Age.

The hotel in the photo above is where my in-laws spent their honeymoon. Yesterday was their 60th wedding anniversary, so they posed on the steps for a commemorative photo. You can see them raising their hands in victory beyond all the two-wheeled traffic in the street.

We aren't staying on Mackinac, though -- we're in nearby Mackinaw City. We took the ferry over for the day. (And by the way, even though Mackinac ends in a C, it's also pronounced "Mackinaw," just like the town on the mainland. Apparently the city elders there simply decided to adopt a more phonetic spelling. It's very touristy to pronounce "Mackinac" like it rhymes with "heart attack.") 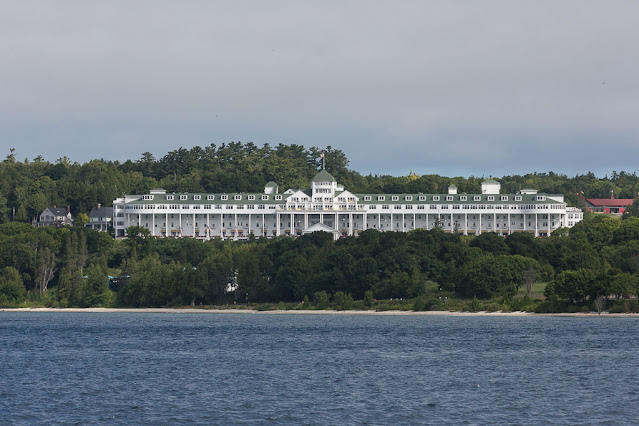 The island is dominated by the Grand Hotel, seen here from the ferry on Lake Huron. It supposedly has the world's longest front porch. We didn't actually go there. Apparently it's crazy expensive and I was fine seeing it from a distance. 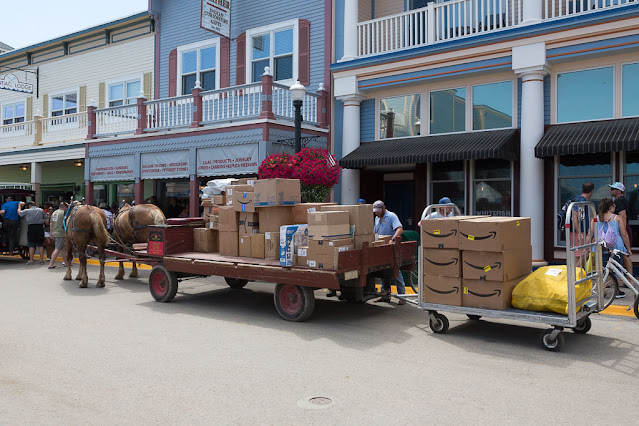 As I said, everything on the island is done by horse-drawn carriage. I saw a horse-drawn rubbish cart, and even the Amazon packages come by equine special delivery!

We walked up and down the main street, popping into little shops and stopping at a restaurant called Millie's (named, apparently, for a dog) for lunch. We had a drink at the Iroquois (top photo) which has a beautiful back patio and dock overlooking the water. I had a variation on a Moscow mule -- vodka, ginger beer and lime.

Then we took a horse-drawn carriage tour, which took us off the main drag and into the forested interior of the island. Apparently it's all a state park. The horses for the first leg of our journey were named Merle and Lady, and although I failed to look at Merle's much-touted mustache I could hear Lady's unladylike legendary flatulence. It was like an episode of Seinfeld. 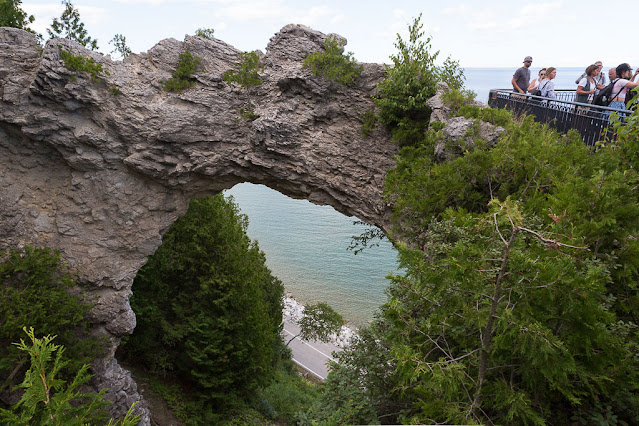 We eventually wound up at a popular scenic spot called Arch Rock. I don't know anything about the geology of this beyond the guide saying it was caused by erosion. But it was pretty impressive. That's a coastal road way down at the bottom, with Lake Huron in the background. 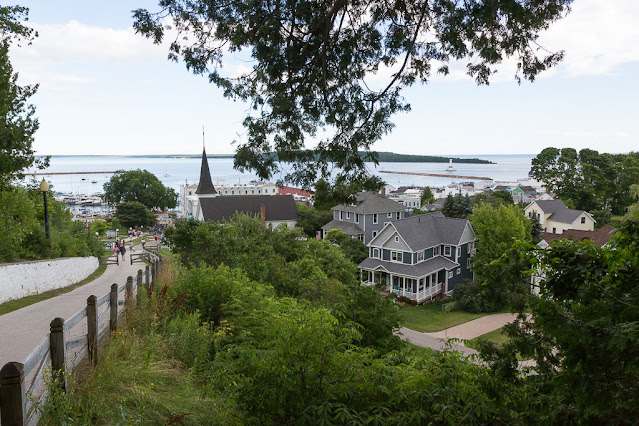 The carriage dropped us at the top of a steep and winding (but scenic!) path near the Michigan governor's summer home. From here we had a nice view as we walked the short distance down into town.

We had dinner at Mary's Bistro Draught House before catching the second-to-last ferry back to the mainland. 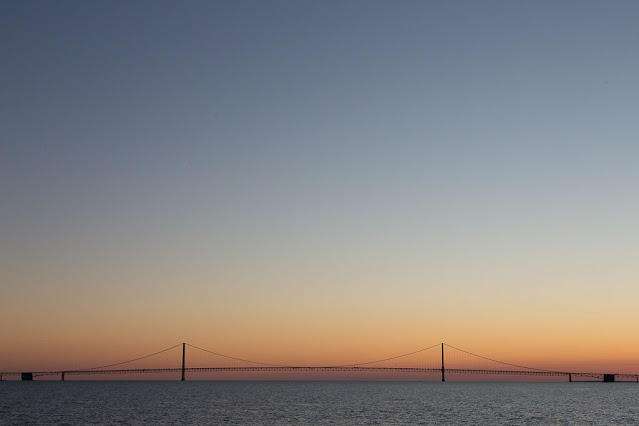 And that's when I got my best view of the famous Mackinac Bridge, connecting the upper and lower peninsulas of Michigan. We're supposed to travel over that bridge today. Stay tuned!
Posted by Steve Reed at 1:13 PM

The picture of your in-laws waving from the hotel is just priceless. It looks like a shot from a movie set with all the bikers and strollers and spots of red in the shot. I love it!
I also love that you are on a real vacation doing real tourist stuff. What fun! (At least I hope it's all fun.)

You are having fun. Amazon deliveries by horse, lol. It looks like a rather interesting place to visit.

I've only ever seen photos of the Grand Hotel and thought that was the only thing on the island. I didn't realize there was an entire town of businesses and people getting around in carriages and horsedrawn conveyances. Very cool.

Fascinating seeing everything from street level .
The Ariel America programmes on PBS are good but lack detail!!

That looks like great fun! I am glad you had such a beautiful day for your visit. Love your last shot of the bridge at sunset! Your trip is going so well!

Just goes to show you, america is versatile! I did not know a place like this existed. It just looks so- perfect!

I've never heard of Mackinac Island and I am so glad you went to visit. What a beautiful place. I love it. Wonderful photos, Steve.

What a great place to celebrate the 60th wedding anniversary! Those few people who stay with one partner that long are certainly well matched and know how to get along! Loved seeing the Amazon packages via horse-drawn wagon! I wonder if they say the delivery will be whenever they get there...

Looking at your photos I was transported back to "Somewhere in Time" with the haunting theme playing in my head. Thanks for the memory.

I would think Beefaroni would be prohibitively expensive to feed horses on Mackinac island.

Thanks for clearing up the sound issue. My wife and I have been calling it both ways these last couple weeks as we figure out what day we hope to land there... by ferry. We're not those sorts of people either.

My husband and I went there once, many years ago. Great place. But I remember that I wasn't hugely impressed by their famous fudge. I'm glad you are having a good time. The bridge goes on forever.

Just bragging that not only have I heard of it, I can even pronounce it! It does look nice. I expect gardeners are glad about the horses, rose growers especially.

Great photos! I've never been to Mackinac Island and have always wanted to go. It sounds like you had a full day of exploring the place. That last photo is gorgeous.

I enjoyed this post! My sister-in-law lived in a Detroit suburb for awhile and though she really didn't like living there, she LOVED visiting Mackinac Island! I've been interested in seeing it ever since.

Thanks for these images from a part of the world I have never seen. I feel very educated now.

That was a splendid tour of a famous island. Thank you.

How cool is that island?! And the irony of Amazon packages coming by horse-drawn cart :)

Thank you for showing us the Island. We had to skip it on our way through because of time and cost but I always wondered what we missed. Now I know, it's so quaint, almost too cute! We did drive that long and high bridge though, arguably one of the scariest in the country! I was so nervous, we were towing a heavy 5th wheel and it was very foggy and rainy that day! Being an RV we had to slow down to 25 miles/hr which makes for a loooong 5 miles! When the weather is real bad, high winds or snow or sleet, you'll be escorted to the other side and if you don't trust yourself with heights you can even hire a chauffeur who'll drive your RV for you. James did fine of course, didn't even break a sweat!

Sounds like a great place to go especially if you're from Hamstead!

Thanks for sharing your reflections and your pictures Steve.

Love this post! It's a beautiful place and I would enjoy visiting it although I'm not a fan of horses. (or flatulence!)

What a fun post. If you get to Traverse City, Chateau Grand Traverse sells my favorite mustard and Sleeping Bear Dunes is one of my very favorite places.

This seems like a super place to visit. Enjoy your stay, hugs, Edna B.

It's all so beautiful! Thank you for the photos and the Mackinaw pronunciation tip. I would have said it wrong for sure.

What a lovely and interesting island. Thanks for the tour!

That reminds me of our visits to some of the islands in Lake Erie. I miss those trips!

If I ever find my way to Mackinac I'll know how to pronounce it. I love that they don't allow cars. That Grand Hotel is huge. I'd much rather stay at the place your in-laws stayed at.

It's a lot easier going down than up! You were smart to skip the Grand Hotel -- they make you pay to walk or sit on the porch and really... not needed with so much other beauty around. I ate at Millie's the last time I was there and had a terrific sandwich! We haven't done the carriage ride in a long time -- like, since I was five. I'd like to do that again and see things I've missed. The views you got were terrific. Did you notice all the "Somewhere in Time" memorabilia around the place? Time for you to watch the movie now that you've been there. Besides, Chris Reeve and Jane Seymour never looked lovelier!