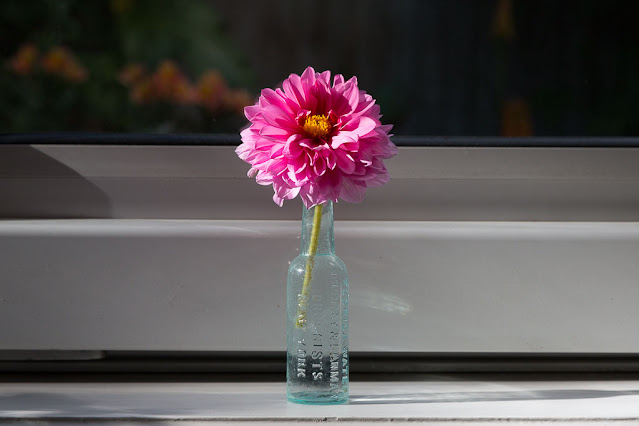 I had to cut this pink dahlia off the plant because the stem was so long it was bending down and sweeping the grass. Our hosepipe ban starts today, so from now on no watering with a garden hose. Light rain is forecast for tomorrow night, but otherwise there's no rain expected for the rest of this month. It's not as hot and dry as it was, though, so at least what moisture we do have is sticking around longer.

I really have nothing much to say today. My mind is full of work-related stuff and no one wants to hear about that!

Dave and I finally got a chance to watch the first episode of "Pistol," Danny Boyle's miniseries about the Sex Pistols, last night. You may remember I saw it being filmed on a little side street in St. John's Wood last year. I was mainly interested to see how that strip of storefronts that they turned into the King's Road of the 1970s would appear, and here are some screenshots: 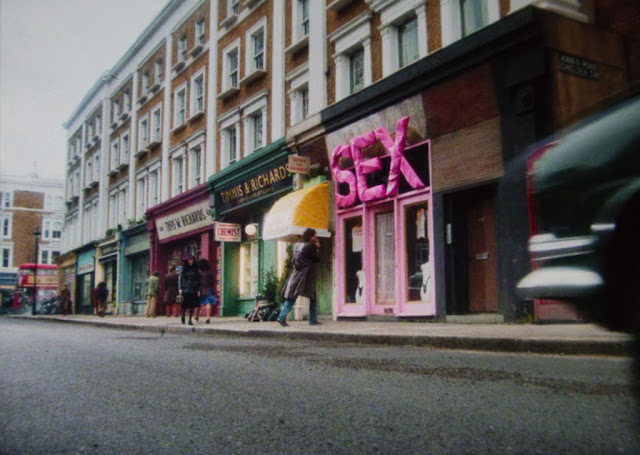 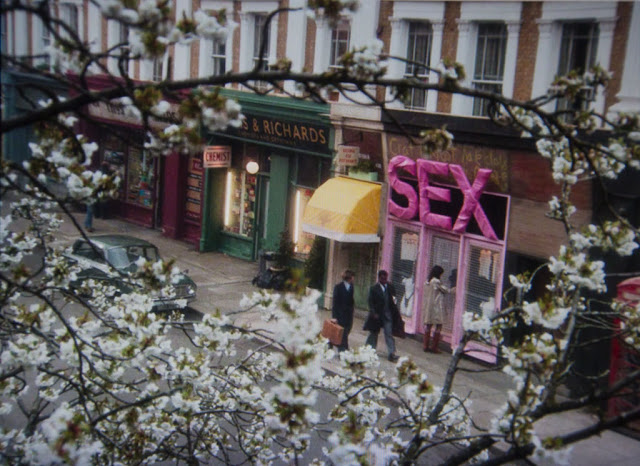 That pink shop with the big "SEX" sign, a stand-in for Vivienne Westwood's boutique, wasn't there when I stumbled across the set. But the other shopfronts and that yellow awning are all visible in my photos, taken from the intersection at the end of the street where the red bus is visible. There are some blooming trees on the housing estate across the street, and it's cool how they worked them into the shot above. In real life those shopfronts are all empty -- or offices -- and painted a bland white.

The show seems interesting, though I am not at all a Sex Pistols fan. I'm sure we'll watch the rest of it.
Posted by Steve Reed at 6:40 AM

That pink dahlia would look perfect in a green glass bottle. Or something silvery and opaque.

Great shot. I know little about the Sex Pistols. Maybe I’ll check out the show -- simply because you took pictures.

Some of us do want to read about your work-related stuff - especially your latest plans to combat the evil and insidious force known as "The Overdues". I expect they are all entitled Trumpians who, in the name of justice and democracy, must be crushed.

I hope they keep the hosepipe ban on long enough for reserves and groundwater to recover.
Flowers are good in the garden, but that was a good choice. Sometimes you can really appreciate a flower when it is on its own.

I don't mind hearing about work related stuffs. Didn't London recently experience flooding? Maybe not the water catchment areas. If we have water restrictions, they are usually sprinklers off, and alternate days for hand held watering, early morning or late evening.

Yes, the deception with film making.

Funny they couldn’t transform the actual Kings Road.
I lived off there at Cheltenham Terrace in the ‘60s.

That flower is gorgeous! Love it! And I wonder if I would go into a store with a giant sex sign. The answer is yes, I'd have to see what kind of sex they were selling. Ha!

I often find that even though I have never given much thought to a person or band or whatever, when I read about them or see a film about them, I realize that there is much to be interested in about them.

Best wishes for a good start of the new school year!
We are only watering very selectively and I am hoping for plants to survive thanks to their deep(ish) roots and survival instincts. At the same time, it's a good test for what will survive in future as we probably will have even hotter periods ahead of us. This year's may be the coolest summer our(future) grandchildren will have experienced.
Anyway, there are some surprisingly hardy and not too thirsty plants in our garden - I never would have expected.

I remember the radio playing Sex Pistols songs in my youth but googling their song list, I couldn't tell you which one. I suspect the radio DJ's back then just liked saying "Sex Pistols" when recapping the songs they had recently played.

Lovely dahlia flower. Seeing that makes me miss our big blooming dahlias. We didn't plant them this year.
I always love reading about your work at the library. You have good stories to tell.

Our long dry spell is over it seems, for now anyway. Rain last night and this morning. They even lifted the burn ban which we would burn if it stopped raining!

Pretty flower and I wasn't a fan of the Sex Pistols either.

That pink dahlia is lovely. I saw a lot of dahlia blooms when I was in California. Sherman's Garden grows quite a lot of them. They are such big, beautiful blooms.

I have an album called "Troublemakers" that includes music from the Sex Pistols along with a number of punk bands. I vaguely remember a song on it (Anarchy in the USA), but never liked them enough to purchase anything else. Maybe I need to fire up the turntable. 😉

I've heard of the Sex Pistols but that's about it! By the way, I've tried several Ruth Ware books but the last one that I couldn't even finish was something about Cabin 10 or something. Hated the characters and am tired of the unreliable narrator POV.

I never mind when you post about work related stuff since I can definitely relate to being a teacher. My substitute called me today and told me that some of my classes this year are very immature and that there are tons of boys who feed off of each other. I really, really don't want to start after Labor Day!

I don't mind work-related posts either. The dahlia is beautiful and better in a bottle than lying on the ground, for sure.

@ Margaret: I noticed your comment about Ruth Ware and The Woman in Cabin 10 - I disliked that book too. I had a hard time finishing it and mostly did so only because I read it during the first part of the pandemic and was running out of books!

River: Well, the bottle it's in is sort of greenish. Does that count? :)

Mitchell: It's entertaining but the "music" is agony.

YP: Well, I AM the enforcer of civilizational standards at our school, so yeah, that's pretty accurate.

GZ: I think that's the plan, to allow the groundwater, reservoirs and rivers to recover. It will take a while, but a ban now is better than a springtime ban during the growing season.

Andrew: There was momentary street flooding during our heavy rain a week or so ago, but nothing lasting or too damaging.

Marty: I suppose stopping traffic on the actual King's Road would have been way too disruptive. This tiny side-street wouldn't even be noticed.

Bob: It was pretty dramatic, wasn't it? Go Viv!

Bug: Well, you couldn't help but be intrigued, right? Funny thing is, it's a clothing store, not a sex shop per se.

Ms Moon: I agree. I think the personal dynamics involved in creating and sustaining a successful band can be pretty interesting.

Sabine: Monty Don on Gardener's World has repeatedly made the point that we must adjust our gardens to fit our changing climate. So a little bit of natural attrition is probably healthy.

Ed: I remember talk about them -- I think some kids at school had Sex Pistols t-shirts -- but I don't think I ever heard their music on the radio. I guess I wasn't listening to that kind of radio.

Robin: I keep our dahlias through the winter and plant them out again each spring. We've had our current crop of dahlias for several years now.

Ellen: I think it's hard to be a "fan" of the Sex Pistols, since they seemed to disdain anything appreciative!

Sharon: I can imagine a California climate would be perfect for them.

Kelly: I'm impressed you still have that album! I was never able to tolerate the punk sound.

Margaret: OK, good to know! I'll steer clear of that one!

Michael: Oh, Lord. There's nothing worse than a gang of teenage boys who are all trying to one-up each other.

Jenny-O: That's what I thought. I almost never cut a flower but in this case it made sense. Two strikes against Ruth Ware!

John: I'm normally not a huge fan of the color pink but I do like that dahlia.

Gorgeous dahlia! It's fun to see how they change the streets to adapt to the time period.

Wonderful photos! I generally love Danny Boyle's stuff, so I'm going to look out for that series. I'm not a Sex Pistols fan (is anyone REALLY?), but I admire their audacity.