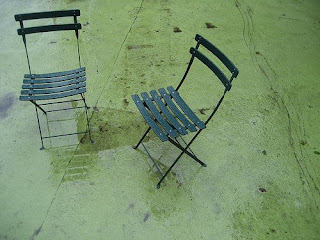 Part of my job recently has been to monitor the reader forums at our newspapers -- the message boards where readers can go to discuss current news stories. This is a really unpleasant task.

These boards are something like talk radio in written form. If you’ve ever listened to talk radio, you know how exhausting it can be. It’s really depleting to listen to chronically angry people.

On the message boards I see the same ill-informed allegations about candidates (“Barack Obama is a closet muslim” is a fairly pedestrian example, though they get much more creative than that) and weird conspiracy theories. Posters rail against the “liberal media” that won’t tell the real story as they’re describing it. They regurgitate information they get from partisan news sources that blame the opposing party, realistically or not -- I mean, let’s face it, on most issues there’s plenty of blame to go around.

I’m monitoring all this not to change the conversation, but to see how well the message boards are serving readers and how civil (or uncivil) the discourse is there. I must admit I have serious doubts about whether all this arguing and disinformation really does anyone any good.

What this has shown me is that people are going to believe what they want to believe. If the mainstream media (“MSM,” in board lingo) report only the facts, some readers will say we’re covering up or have a political agenda. “Facts” have become so fluid, so prone to interpretation and spin, that the word has virtually lost meaning. And that's the most troubling thing of all.