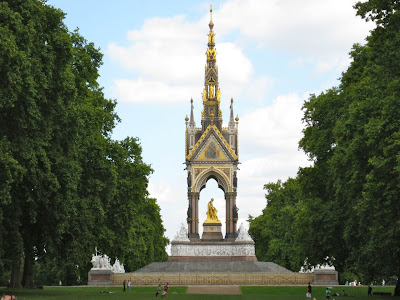 The other day I walked over to the Albert Memorial in Kensington Gardens, just opposite Royal Albert Hall. The memorial dates from 1872 and celebrates the life of Prince Albert, Queen Victoria's husband, who died in 1861. I first saw the memorial when we went to Royal Albert Hall for a BBC Proms concert at the beginning of August, and I thought it looked amazing, lit for the evening in all its gilded finery. I subsequently read a criticism of the memorial as tacky compared to some of the park's other, more understated statues -- but I have to disagree. It's busy, in true Victorian style, but I think it's pretty awesome.

The main body of the memorial -- which was designed by Sir George Gilbert Scott, according to Wikipedia -- consists of an ornate canopy over a seated statue of Albert. It's flanked by allegorical statues of varies aspects of the British economy, such as industry and commerce, and by four statues representing the continents where Engand had an Imperial presence: 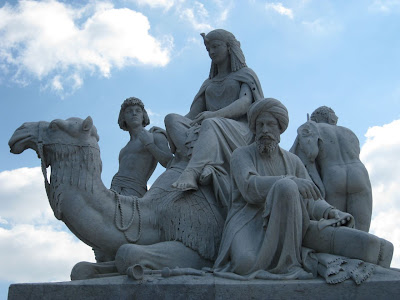 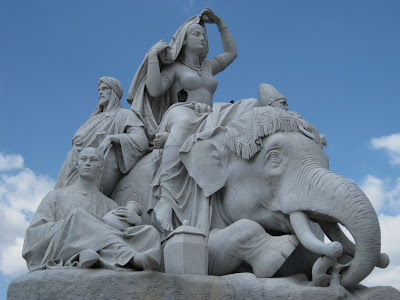 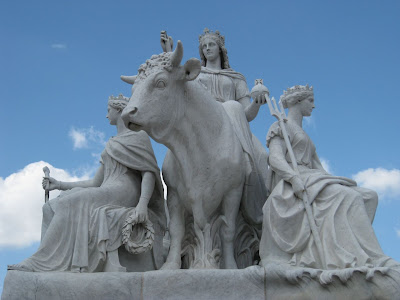 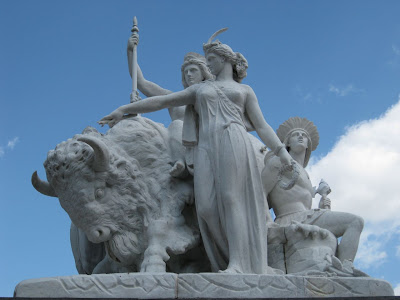 I'm not sure why Australia is missing. It had been colonized by this point, though the different territories there had not yet joined into a single federation. (Maybe it was just a matter of necessity -- the memorial has four corners so someone had to miss out, and Australia, a former penal colony, was perhaps low man on the totem pole.)

Albert himself is in the center of all this, an elevated, gilded statue that apparently once used to be painted black, gazing down from his perch with a dreamy expression and a book at his side.
Posted by Steve Reed at 9:03 AM

Black Albert would have been more intriguing. Maybe they could not quite make a wombat look majestic enough for An Aussie group...I think that you are correct- Australia - gigantic prison packed full of rough roustabouts and women who wore trousers...not exactly the Victorian ideal.

Did you figure out how many holes it takes to fill the Albert Hall (A Day in the Life)? The Beatles were my introduction to so many things British!