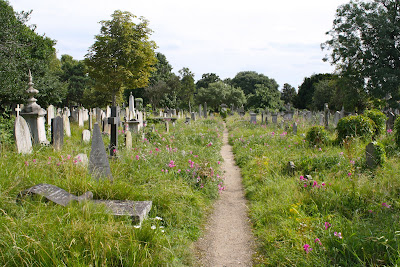 While on my walk near Earls Court on Monday I made a fascinating discovery -- Brompton Cemetery. I was utterly unaware of this huge graveyard, where tangled tall grasses, sweet peas and wildflowers grow over and around more than 35,000 headstones. Many of the stones date from the Victorian and Edwardian periods, and feature sculptures and detailed epitaphs about the people buried there. 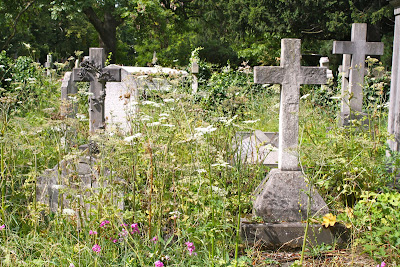 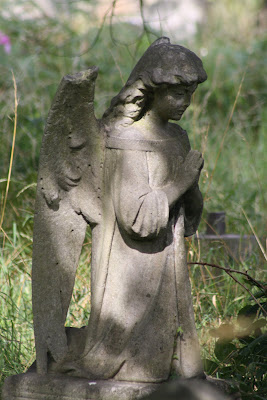 Many people think of cemeteries as morbid, depressing places. In the U.S. they tend to be vast, carefully tended lawns, empty of activity. But this one is more like a park -- in fact, it's operated by The Royal Parks and there were people walking dogs, sitting on benches, reading, jogging and lounging in the sun. It was interesting to see so much activity in a cemetery. 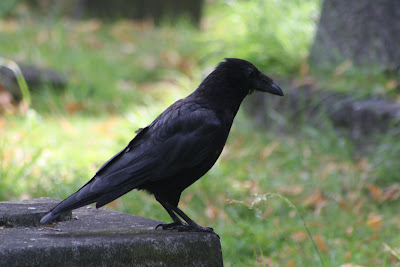 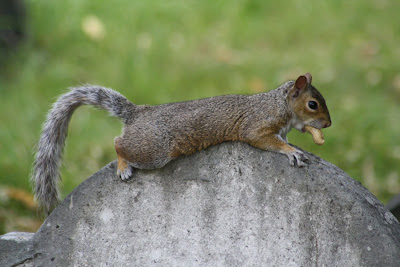 A few small animals were out and about. The big blackbirds seemed Poe-ish and a bit creepy, and I saw several squirrels lying with their bellies against the cool gravestones, like this one. I suppose it must be comfortable. (Not sure where that squirrel got his peanut -- I suspect someone fed him, but it wasn't me.) 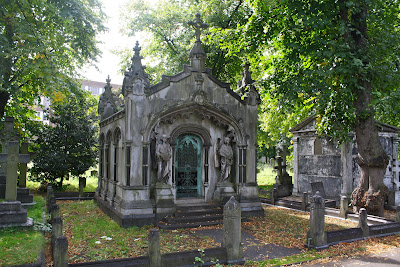 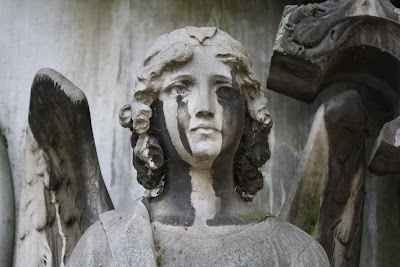 Aside from rows and rows of headstones, there are a large chapel with twin colonnades and many mausoleums on the property, some of them quite ornate. Supposedly many well-known Londoners are buried here, but the only name I recognized was that of Blanche Roosevelt, an American author and opera singer.

It's an amazing place to wander, especially with a camera. I was already on my way home when I found it, and I wound up spending an hour there!
Posted by Steve Reed at 2:33 PM

I really love walking around cemeteries. Have you been to Bonaventure Cemetry in Savannah?

I'm amazed the stones were in such good condition. My experience in old cemeteries in places like Norway and Poland has indicated much of the older stuff is worn and unreadable. I love the way you are really exploring every facet of your new home territory!

Brompton Cemetery is a new one on me (adds to list of places to visit.) Loved your photos!

If you enjoyed that, may I suggest London's best known cemetery: Highgate. Plenty of famous names there - http://www.highgate-cemetery.org/index.php/famous-interments
I think there's an admission charge for part of it.

Another one worth a visit is Abney Park in Stoke Newington - http://www.abney-park.org.uk/Abney_Park_Trust/Welcome.html
That one's free.

PS I think the black bird is a rook.

Gary: I haven't been to Savannah, but I would love to go. I loved "Midnight in the Garden of Good and Evil."

Betty: Thanks for the cemetery tips. A rook! Interesting! A sign about the cemetery's birds said "blackbirds" were very common, but that seemed like a really big blackbird. Rook sounds more likely to me! (I thought maybe it was a raven. What's the difference between and raven and a rook, I wonder?)

Steve: I'm not going to tell you because it will make me sound even geekier than I am (I like birds) :)

Savannah is lovely if you ever get the chance to go. Been twice but not to the cemetery.

Actually, Betty, I think this is a crow. Rooks apparently have pale faces and beaks, and a peaked head. (At least that's what the Internet tells me, and the Internet is never wrong. :) )