Horses and a Blue Lagoon 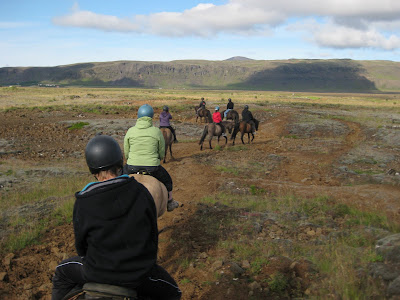 Dave and I set off yesterday morning for a horseback-riding adventure at a farm on the other side of the mountains just outside Reykjavik. I haven't been on a horse since I was about 12 at Camp Indian Head, so this was quite an outing for me. We spent about 45 minutes riding to the farm in a mechanically suspect van with about eight other people, and once there we were fitted with helmets -- all except Dave, whose head is too big -- and assigned a horse. My horse was a short little brown guy whose name I shamefully never asked.

Icelandic horses are small, and whereas most horses have four gaits -- walking, trotting, cantering and galloping -- the Icelandic horses also have a fifth gait, which as best I can tell is between a walk and a trot, with a variation in the sequence of the footing. It's called "tölt." We were tölting during our ride.

We started off at the farm and made a wide loop through the surrounding pastureland, all in a coastal valley ringed by mountains and the ocean. We crossed streams and traveled on rocky paths. Fortunately my little horse was so well-trained that I didn't need to give it many directions -- we all basically rode in a nose-to-tail line -- but I was surprised at how much of the Camp Indian Head riding technique came back to me. I could mount the horse correctly and knew how to hold the reins and sit in the saddle. Funny how stuff like that stays in your brain. 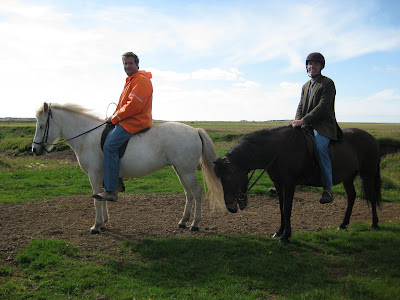 After riding, we hopped back into a van and went out to the Blue Lagoon, which is a huge, naturally heated mineral pool and spa on the peninsula southwest of Reykjavik. It was the weirdest landscape in the world -- sharp, black rocks and virtually no vegetation, aside from the tiniest mosses growing in the crags of the lava stone. In the middle of this wasteland is a geothermal plant and what looks like a big pool of blue milk. That's the spa -- and swimming there is really otherworldly. It feels great, though the water has a very high mineral content and you're warned to shower both before and after swimming. (I neglected to shower afterwards and although it didn't bother me, I'm told some people have reactions -- such as itchy skin -- to all the minerals.) 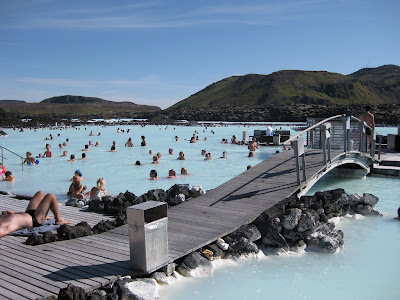 After a couple of hours at the Blue Lagoon we came back to Reykjavik and had dinner at Fiskfelagid, or Fish Company, which is the best restaurant we've been to in Iceland and maybe even in Europe. I had the "Tour of Reykjavik" menu, which was three courses of fish specials that were imaginative and incredible. (And none were whale!)
Posted by Steve Reed at 9:55 AM