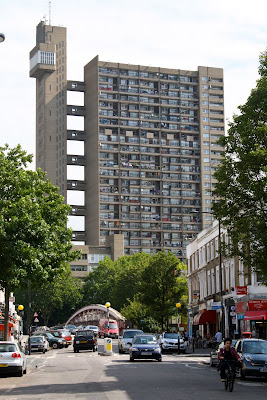 The other day I was walking from Maida Vale into Notting Hill, near a branch of the Grand Union Canal, when I crossed paths with this lovely edifice. I thought, "Man, that is an ugly building."

I realized when I got home that Dave and I can actually see this building from the bedroom window of our new flat. At a distance, it doesn't look quite so horrible. (And admittedly, neither our building nor those of our neighbors would win an architecture prize.)

In this photo from our window, you can see it in the background on the right: 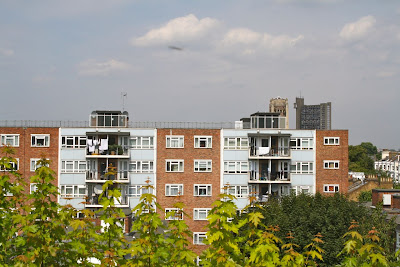 I was curious about this building, so I did some Googling. I started by searching "ugliest building in London" in Google images, and sure enough, it popped up. (Along with Strata Tower, aka the "electric razor," which was officially named London's ugliest building of recent vintage.) 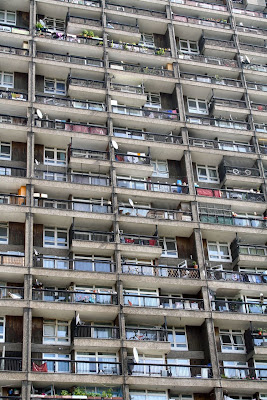 My Googling led me to this blog, where the writers concur that this concrete monstrosity is, in fact, the ugliest building in the city. They also provided some more info -- namely, that the building is officially known as Trellick Tower. 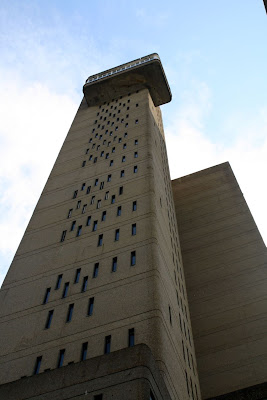 According to Wikipedia, Trellick Tower is a 1972 structure designed by Hungarian architect Erno Goldfinger in the Brutalist style. It has a very similar sibling known as Balfron Tower, also by Goldfinger, in East London.

It's easy to see Goldfinger's Hungarian roots in these structures. They definitely have a Soviet-puppet-state aesthetic.

I don't dislike Brutalism as a rule, and sometimes that raw concrete look really works. But this isn't one of those cases, in my opinion. What's with that detached elevator shaft, connected to the main structure every few floors? Isn't that awfully inconvenient for residents? 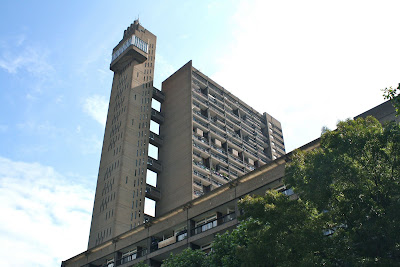 Apparently Trellick Tower -- a government housing project -- had a bad reputation as a dangerous place soon after it was completed. But security was improved and now some of the apartments are privately owned. I found a listing online for one 21st floor, two-bedroom unit that's priced at £450,000! (That's about $720,000.)

I walked around the base of the building to take these photos, though, and it's not what I would call gentrified. There's quite a bit of graffiti (pretty good graffiti!) and although the neighborhood doesn't seem at all unsafe, it could fairly be described as a bit down-at-heel.

But the building has some local significance and is apparently a well-known landmark. It has made its way into popular culture, on TV and in movies, and was featured in a song by the band Blur. It's also depicted in a nearby mural along the canal: 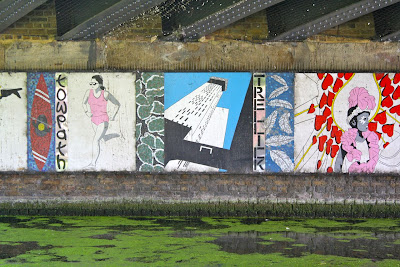 I hope whoever lives there enjoys it. I, for one, would rather regard it from a distance.
Posted by Steve Reed at 1:18 PM

This reminds me of so many Communist-era buildings we saw in Warsaw. Probably built around the same time or a little earlier. Let's hope the amenities on the inside make up for the lack of charm on the exterior.

i expect someone thinks its beautiful though.....

in fact i think i will do just that and see!

thanks for the flights of fancy....

It IS a very Communist-looking building, Barbara!

And you're right, Kim -- I'm sure it has its fans! In fact, even though I don't care for it, I think it has an interesting history and architectural presence, which is why I wrote about it. (Compared to some buildings, like ours, that are merely bland, generic apartment blocks.) I forgot to mention that it is a listed building, which means it has some architectural protection.

Interested to hear it's a listed building! I'm not a fan of that style of architecture either, but it reminds me of buildings we saw in Prague. And Prague is wonderful. (How long before you and Dave are jetting off to mainland Europe??)

Wo in their right mind would spend $700,000 such a place? You would have to pay me to live there. More like Communist era Rumania.

Its a Grade 2 listed building. Private properties inside the tower have sold for between £250,000 for a one-bedroom flat to £480,000 for a fully refurbished three bedroom end apartment