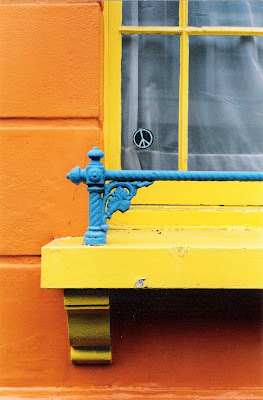 I visited London twice before moving here. My first time was in March 2000, when I met up with my friend Arthur, who was in London on business. We stayed off Norfolk Square, near Paddington Station, and explored for a few days en route to our real destination -- Paris.

The second time was in July 2003, with my then-boyfriend, now-friend David. (Not to be confused with my current Dave.) We stayed in the same hotel off Norfolk Square and also made London part of a larger European trip that included Prague and Switzerland.

But on my second trip I took some more random shots of buildings, doorways and such. Now that I live here, I thought I'd try to find a few of those places again, to see how they'd changed.

Here's one example. The photo above was taken in 2003 on Pembridge Road. At the time, David and I were walking with his sister and her boyfriend (now husband) to find the Portobello Road Market. We passed this great window, and I loved the little peace sign sticker and the groovy paint job. Portobello Road earned a reputation as a hot spot of "swinging London" in the '60s, and the window seemed to express that. 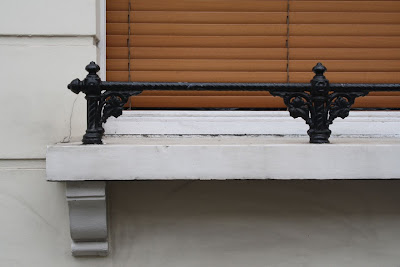 I guess whoever owns the house now decided to go the minimalist route. I think it's a sad statement. In fact it took me a while to figure out which window it was -- the relatively unusual wrought-iron, the crack in the wall and the telltale chip in the windowsill make it a certainty.

It's always interesting to see how things change over time. In this case, it wasn't even very long -- just eight years!
Posted by Steve Reed at 11:56 AM

I love the statement the colors make. The dull version is just so ho-hum. At least the market remains vibrant! A lot has happened in those 8 years...

i love the then and now photos!