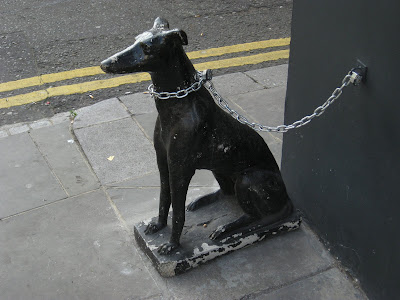 As you may remember, our plan in moving to London was that we would come first and get settled, and then I would return to the states in October to retrieve our dogs, Ernie and Ruby.

England has stringent laws about importing dogs that require a a fresh rabies vaccination and blood test, followed by a 6-month waiting period before they can enter the country. I got Ernie and Ruby vaccinated in late March and then blood tested in early April -- right after we learned we'd be making this move. That means they'll be eligible to enter England on October 5.

Until then, some friends in New Jersey are taking care of them. (Saintly friends, I must add, though we've promised to repay them with tickets to London!)

As the time has grown closer for me to return to the states, however, I've been thinking about our options. I have friends who have moved pets to England through professional pet importers -- at an employer's expense. (If only!) I began wondering if it would be much more expensive for us to go that route than for me to fly home, rent a car, buy dog crates, put myself up in a hotel and run all over New Jersey doing official paperwork.

I researched pet importers and found one in New Jersey that seems very capable. It is expensive -- but probably only a few thousand dollars more than it would cost me to go home and do it all myself. And they're pros. They know what's required. 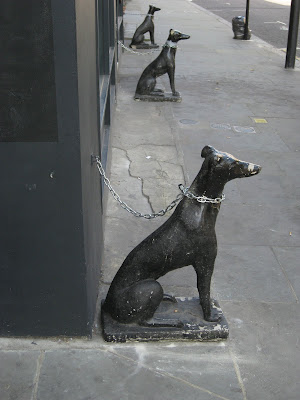 So we're arranging for this company to finalize the papers for Ernie and Ruby, provide their crates, pick them up in New Jersey and get them to the airport, take them through customs here in England and deliver them to our door in Notting Hill. I just mailed the contracts and all the vaccination certificates and blood test results last week. Early October is still our target date.

I am relieved at not having to fly back to New Jersey and risk getting entangled in official pet-exporting regulations. Sometimes it's best to just pay someone!

(Photos: Dogs in front of a shop on Westbourne Grove, looking like they've been told to permanently "stay!")
Posted by Steve Reed at 8:11 AM

You are so smart. This is best for you, Dave and the dogs, too. Seeing you in a frenzy rushing around would not help them feel more relaxed about this big move.

Sometimes it's well worth it to spend some money. You are so good to your dogs!

We pay people to do all sorts of things -- things they can do better than we can. It makes sense. You can look forward to a happy reunion with your beloved canines without the hassle of transporting them yourselves. You can start counting down the days. October is not that far away!

hmmmm i wonder how hard it is to break into the biz of being a companion human to immigrating pets!

i'm so happy to hear that there will be no delay past early october for you and dave to be reunited with ernie and ruby!