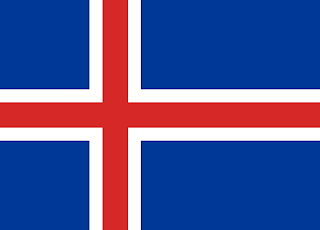 I'm in Iceland! Dave and I had to leave the UK to re-enter on our residential visas, which became valid in early August, and he has a friend visiting Iceland in just a few days. So we decided to meet her.

We flew up yesterday, over a cloud-covered England and Scotland. The clouds parted just in time for me to see the northern coast of Scotland over Stornoway. Then we cruised out over the North Atlantic, and after another hour and a half or so we landed in Reykjavik.

Everything here is very clean-lined and Scandinavian, even the landscape. There are no frills. But it's a beautiful country, with wild-looking treeless mountains covered in green heathery scrub, bordered by a deep blue ocean. It seems to be daylight all the time, at least at this time of year. It was light when I went to bed at 11 p.m. last night, and even brighter when I got up at 6 a.m. this morning.

So far we've had only one meal. I had hatched fish with black bread, which is apparently a traditional Icelandic dish -- it was like a huge fish cake covered with hollandaise sauce. (I'm skeptical that the truly traditional version includes hollandaise, but who knows.) Dave had lamb, another local specialty. I think I'm going to steer clear of the cube of rancid shark meat with a schnapps chaser -- call me crazy -- and I can't bring myself to eat Minke whale, either. We asked the waiter at the restaurant to recommend traditional Icelandic food and he suggested the whale or the horse -- but then admitted that he ate neither.

I haven't quite figured out local pronunciation -- there are letters that we don't have in English, and names tend to be long. Our hotel is on Raudararstigur, which looks to me like someone leaned on the keyboard.

And the TV! It's pretty awesome. We saw a guy on an Icelandic cooking show grill a platter of fruit covered with Snickers bars -- I am not kidding. And last night I watched a Swedish show called Allsång, which is basically a huge sing-along with pop musicians and dance numbers. It reminded me of an updated and more youthful Lawrence Welk Show, which makes sense, because Welk himself had a Scandinavian background. Must be a cultural thing. Anyway, I started watching it because it was so funny -- just so sincere and sort of square -- and before I knew it I was really into it!

I didn't bring my computer, so my photos may have to wait until I get home. Or maybe I can upload some via iPhone. We'll see. Meanwhile, here's the Icelandic flag, ganked from Wikipedia.
Posted by Steve Reed at 8:11 AM

I always thought Lawrence Welk was German. Whatever he was, my family watched him religiously every week. I think my father was in love with "the lovely Lennon sisters."

I love the simplicity of Scandinavian design. Everything has a purpose. And yes, the many hours of daylight are so wonderful in the summer months. I think the winters would be a real drag though.