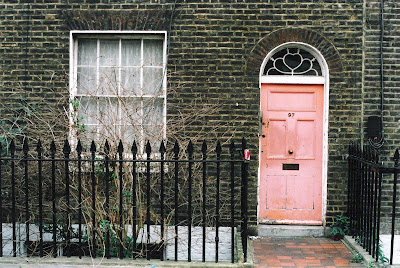 Near the London hotel where I stayed as a visitor in 2000 and 2003 is a wonderfully named three-block stretch of brick townhouses, Star Street. I like the visual simplicity of this street -- a row of similar doors, each with an overhead fanlight and a single window to the side. The color of the door is virtually the only variation from house to house.

Eight years ago, I took the photo above of 97 Star Street, as well as a photo of another door nearby. Since I'm doing "before and after" blog posts -- Berkeley Square and Portobello Road -- I thought I'd walk back over to Star Street and see how those same doorways look now.

Of course, only so much can be done to a single door in a brick building. Below is 97 Star Street as it looks today. 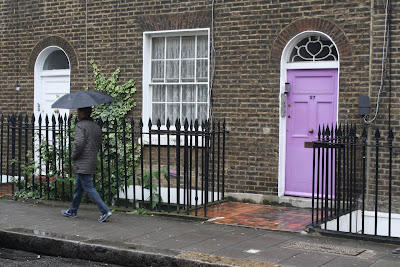 I dig the purple! Very groovy! Looks like they somehow widened their front stoop -- but they still have the same curtains.

Below is a nearby door, 99 Star Street, which is actually two doors down from 97. (For some reason, house numbers begin on one end of Star Street, run consecutively down that side, then cross over and run back up the other side. The house at 9 Star Street is opposite 99, while 98 is next door to 99, for example.) This was eight years ago: 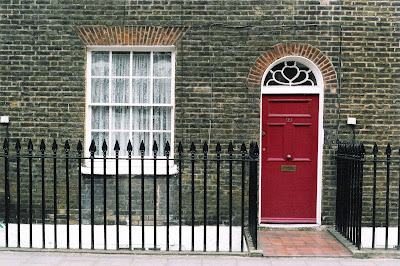 And here's how 99 looks today: 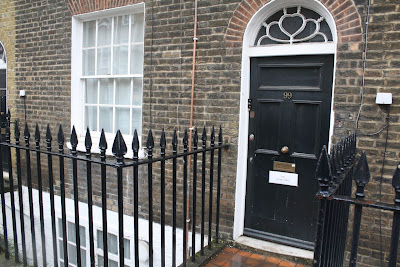 I don't know how I got straight-on shots of these two doors in 2003, because when I visited last week, parked cars blocked my view, which is why I shot them at an angle. Maybe I just got lucky. (And maybe that's why I shot those particular doors.)
Posted by Steve Reed at 2:08 PM

LOVE the purple! I kind of like the new black door, although the red was fun too. I'm enjoying this series.

My favorite door is the red door. The others don't do much for me. It's interesting there is so much change in just 8 years. Many aspects of our house stay the same for decades.

the color of a door expresses so much personality!!!

wouldn't you love to know the thought the residents had in choosing to change!

my current front door is mainly leaded glass and nice natural wood....however i miss the eggplant purple door we had when we lived in connecticut (a change from the acquired red door)....

I love both the lavender and the red...I'm off to catch up on your carnival posts.

Your photos are great! I've seen you around on other blogs but just now came to visit. My favorite is the lavender front door because mine is exactly the same color.