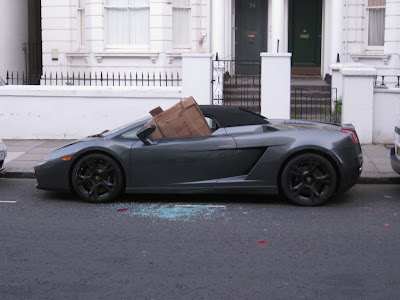 While the rioting in London on Saturday and Sunday occurred in a handful of areas, last night's unrest was much more widespread. We even had a few marauders here in our neighborhood, Notting Hill. Their mischief was on a much smaller scale than in Croydon or Clapham, but it was still alarming. 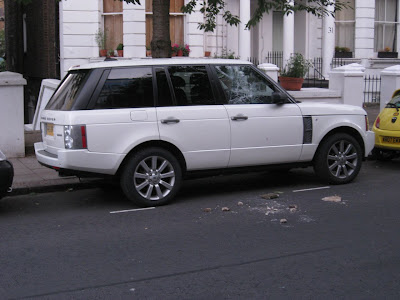 After watching TV news for hours, I tried to go to sleep around 11 p.m. I had no sooner turned in than I heard banging and yelling in the street. I looked outside and saw a group of about 20 youths wearing hoodies walking in a loose group down Westbourne Grove Road. I called Dave to the window, and said, "This doesn't look good!"

The gang turned the corner, and Dave went back to the TV. But a few minutes later I saw smoke billowing up over the buildings next to ours, and a flickering orange glow on the walls. "Dave!" I yelled. "Something is on fire!" 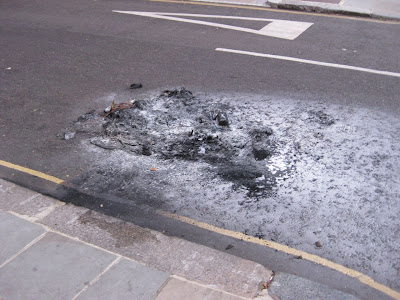 I called 999, which is the emergency police number, but my call went unanswered and was disconnected twice. Fortunately the fire seemed to diminish and we saw at least one police car a few moments later. I heard many other sirens elsewhere in the area -- I suspect that group was walking around causing mayhem.

Dave and I stayed inside. I went out this morning and took these photos. As you can see above, all that remains of the fire is a burned smudge on the pavement, including plastic and some mechanical parts. I don't know what burned. 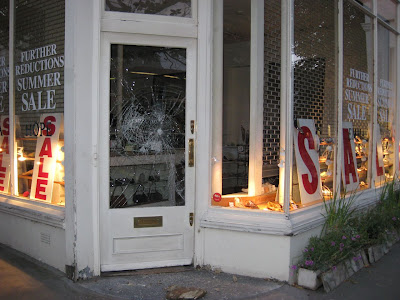 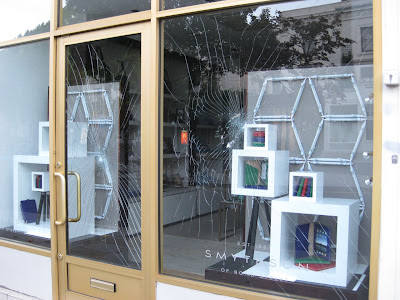 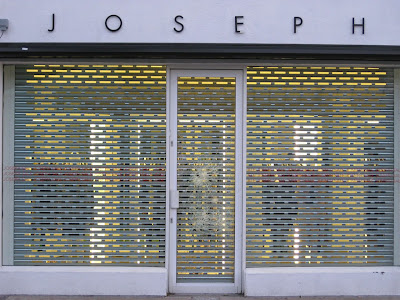 I don't think these people were motivated by anger at the police for shooting a man on Thursday -- the purported reason for the first night of rioting. I think they were just up to mischief. There seemed to be no successful looting in our area, but merely sporadic damage.

UPDATE: Actually, later in the morning we saw this shoe store on Portobello Road, which did appear to be looted: 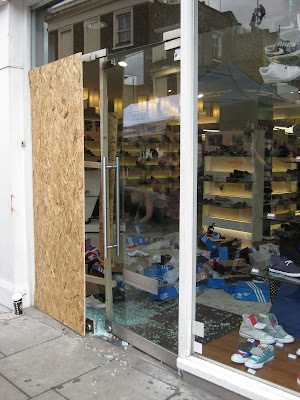 What a crazy thing to have happen right after your move. Hoping everything calms down today. X

Hoping you & your partner stay safe!! (I recognize you from comments on Reya's blog...) My heart goes out to everyone there today.

crazy scary....glad you guys stayed in and stayed safe.....

That's getting a little too close to home. Sounds like discontent is rampant worldwide.

Just checking around the blogosphere for news. Glad to hear you two are safe.

Thanks for the kind thoughts, everyone! By the way, I learned that the burned object on the street was a motorbike. Apparently it was hauled away quickly after the fire was doused.

Hello, Steve. I've come by way of Reya's blog, and want to wish you well.

Your photos are stunning in their depiction of what's happening in your new neighborhood.