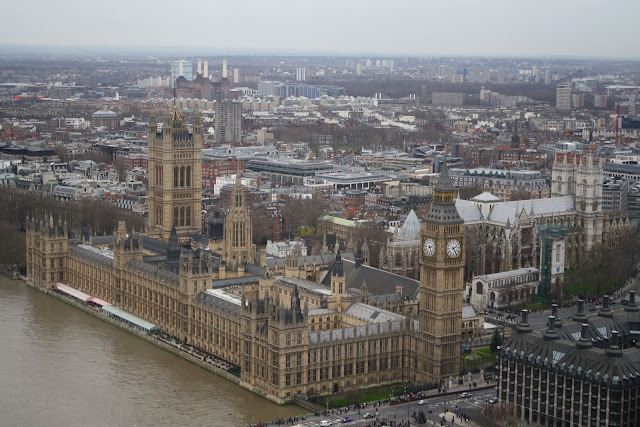 Dave and I have realized that we have very different styles of relaxing. Dave likes nothing more than to recline in his chair with a string of episodes of "Star Trek: The Next Generation." I can hang out like that for a day or two, but after a while I need to get outside and explore. Even when I'm inside I tend to be bustling around on various projects.

(Years ago when my brother visited me in New York he got exasperated with my constant need to be on the move. "Why do you always have to be doing something?" he said.)

During Christmas and Boxing Day, Dave and I pretty much stayed home -- everything was closed anyway. But yesterday I prevailed upon Dave to go to the London Eye, the massive Ferris Wheel on the Thames that towers over the city. At 443 feet high, it's not your typical Ferris Wheel -- passengers ride in windowed, air-conditioned glass pods that each hold about two dozen people, who can walk around freely during the ride.

We've been meaning to go to the Eye for a while, but it's always jammed with hordes of people. I discovered that for about £30 each -- or £11 more than a standard ticket -- we could get passes that allowed us to jump most of the line, which was well worthwhile. One fare buys a single revolution on the wheel, which takes about half an hour.

Above is the stunning view of the Houses of Parliament and Westminster Abbey from the top of the Eye. You can see the Battersea Power Station in the background. We could also see Wembley Stadium, far to the north, the skyscrapers of central London to the east and the suburbs sprawling away to the south.

We topped off the afternoon with a pint at a nearby pub, and then for dinner went to a restaurant in our neighborhood, Bumpkin, that specializes in seasonal British food. We each had a flight of three British wines to drink -- who knew Britain made wine? And continuing my adventures in wild game, I had venison!
Posted by Steve Reed at 8:24 AM