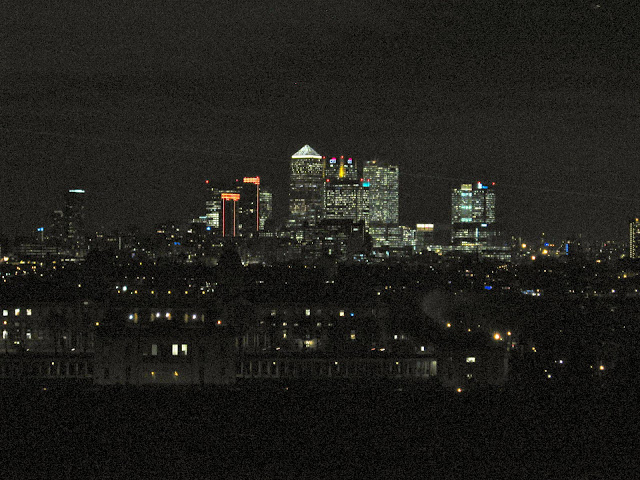 Dave and I went to Greenwich yesterday afternoon to meet one of his coworkers, Anna, for tea. She took us to a homey little tea shop where we had a spread that included salmon-and-cucumber sandwiches, scones with jam and clotted cream and slices of cake. Then, to work off the sugar, we took a walk through Greenwich Park to the same overlook I visited with Sally and Liz a few weeks ago. (Being a former New Yorker raised on stories of crime and "wilding" in Central Park, I doubted the wisdom of trooping through a big park after dark -- but we didn't have any trouble and in fact didn't even see any other people until we got to the overlook.)

It gets dark very early here now. We were out walking shortly after 5 p.m., and as you can see, the sun had already set.

As you may remember, the Royal Observatory at Greenwich is the location of the Prime Meridian, or the beginning point for measuring longitudes around the globe. At night, the observatory sends out a green laser beam that cuts across the sky, marking the meridian. It's hard to photograph a laser, but you can see it, faintly, in the photo above, slanting diagonally in front of the tops of distant skyscrapers in Canary Wharf, across the Thames.
Posted by Steve Reed at 7:30 AM