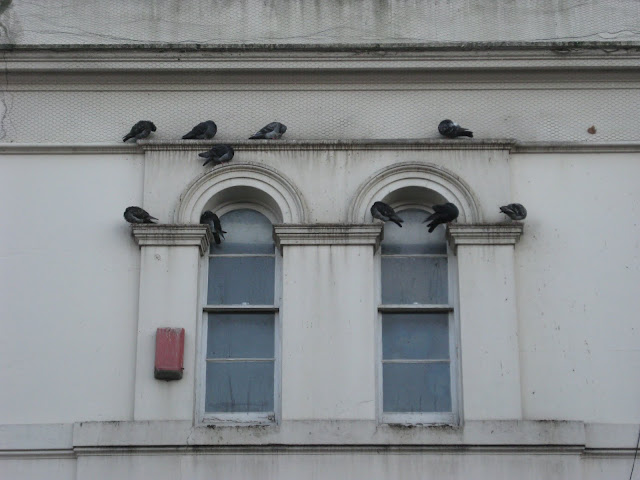 Have you ever had a salad made of duck hearts?

Last night, I took Dave to St. John for Christmas. St. John is a restaurant near Smithfield, London's historic meat market, where the chefs specialize in "nose-to-tail" cooking -- in other words, using every edible part of an animal. Dave has been excited about St. John since before we moved here -- he was talking about going even when we still lived in New Jersey. Being a former vegetarian, I was a little more hesitant, but I decided it was time to check the place out.

The dinner went very well. In fact, it's probably the best restaurant meal we've had so far in London.

Dave got a bone marrow and parsley salad appetizer, followed by calf's liver and onions. I had the aforementioned duck heart salad, which came with beetroot and pickled walnuts, followed by braised hare with swede (which we Americans call rutabaga). As a side dish I got "sprout tops," which are large leaves from the top of a brussels sprout plant. My vegetarian roots will show when I say that my favorite part of the meal was the sprout tops. But the duck hearts were good too -- they taste a bit like a cross between duck meat and liver. I found the hare less distinctive -- somewhat nondescript dark game meat -- but also good and definitely well cooked. Dave enjoyed his food too. For dessert we shared "spotted dick," a soaked sponge cake with currants and cream.

It was kind of appalling, I admit, to look at those five duck hearts and think about the five ducks wherein they used to beat -- that I was responsible, at least partly, for the deaths of five birds. But then I thought, this style of cooking actually reduces waste and sees that more of each animal is consumed, and surely the rest of the ducks were being used elsewhere. In my mind, that didn't seem too antithetical to Buddhism -- especially since, as my teacher once explained to me, many Buddhists worldwide are not vegetarian at all. Maybe I was rationalizing, but it worked for me.

(Photo: Pigeons taking shelter from the wind on Portobello Road.)
Posted by Steve Reed at 7:59 AM