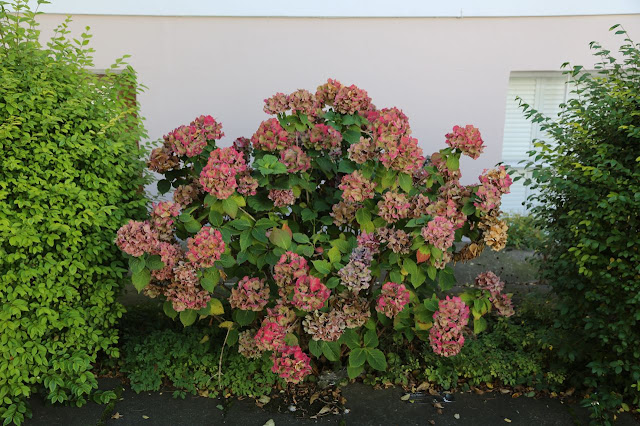 Autumn is definitely setting in. We've had some chilly, blustery, rainy weather the past several days. This hydrangea down the street is just about played out, going dusky and brown-flowered. 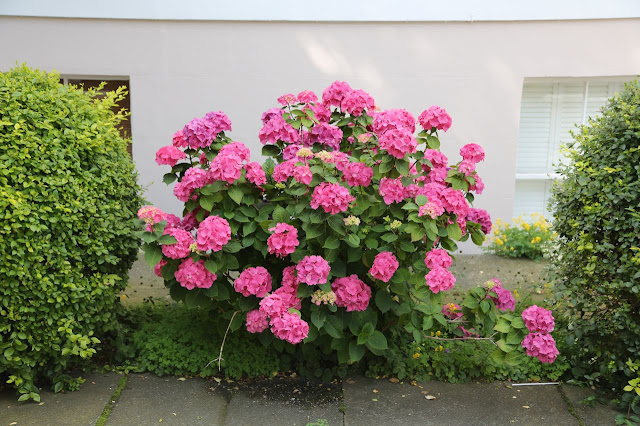 This is what it looked like earlier in the summer -- in early July, to be precise. Quite a difference!

Yesterday I looked for Pat the Balcony Spider and our caterpillar and couldn't find either one. The wind was especially intense on the balcony over the weekend. Maybe they've moved on to warmer locales, though where that would be I'm not sure. A hole in the dirt of a flowerpot? Who knows?

I'm glad I have a comfy apartment from which to view this weather. There's nothing better than lying on the couch in the afternoon reading "Mapp and Lucia" with the wind and rain lashing outside. Especially after tromping around in the rain, as I did yesterday morning, running errands.

"Mapp and Lucia" is a great book, by the way. Written by E. F. Benson and first published in 1935, it's about two very proper British women who become village rivals. It's full of terrific sentences like, "He was almost sorry he had sent her that wonderful Brocklebank letter, for she had been in a very tight place, especially when Miss Mapp had actually seen her stripped and skipping in the garden as a cure for influenza; and had he not, by his stroke of genius, come to her rescue, her reputation here might have suffered an irretrievable eclipse, and they might all have gone back to Riseholme together." There are other books in the series, and I'm going to seek them out, because this is a hoot.
Posted by Steve Reed at 6:59 AM