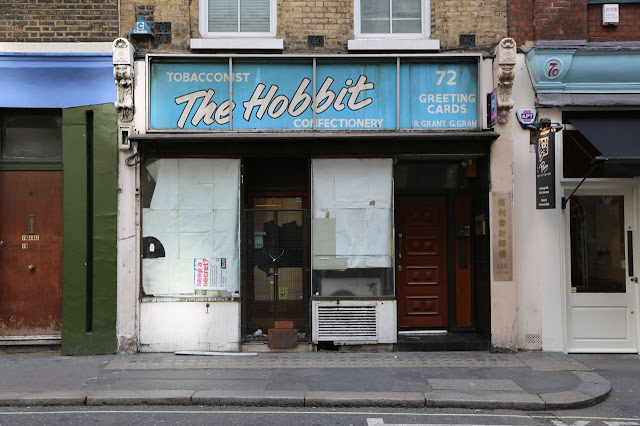 This is the storefront that I went down to Soho to photograph on Saturday. How great is that?! I've walked this street a million times, but only noticed this recently -- I suspect an old sign came down and revealed The Hobbit underneath. (Something like The Moonrakers.)

Several little things to catch up on...

-- We bought a new vacuum cleaner. We had an old Panasonic left by our landlords, but part of the hose broke and it was a pain to use because it forced me to clean in a stooped, Quasimodo-like posture. Now we have a Dyson ball, which is just about the best vacuum I've ever owned. Incredibly lightweight and I can vacuum standing up! And no bags! What will they think of next?! The only downside -- we had it delivered on Tuesday, and the store would tell us only to expect it between 7 a.m. and 8 p.m. I mean, really. Could there be a wider delivery window? I had to cool my heels and not leave home until it finally showed up at 3 p.m., after which I promptly went running just to get the heck out of the house.

-- Remember the street art photos I posted on Sept. 23? Well, someone on Flickr clued me in on one of the drawings. The green guy looking at his bleeding finger and saying "I like it when the red water comes out" is known as "Salad Fingers." He's the main character in a disturbing series of Internet cartoons from 2004. Here's one. Don't watch it late at night, because it's creepy. But do watch it, because it's also oddly funny and just really bizarre.

-- It's cranefly season again. One or two have made their way into the house, prompting me to catch them and put them back outside. And then they fly in again, probably. I may be wrong but I think I've seen fewer of them than I saw last year. Maybe because of the chilly, rainy summer?
Posted by Steve Reed at 6:43 AM