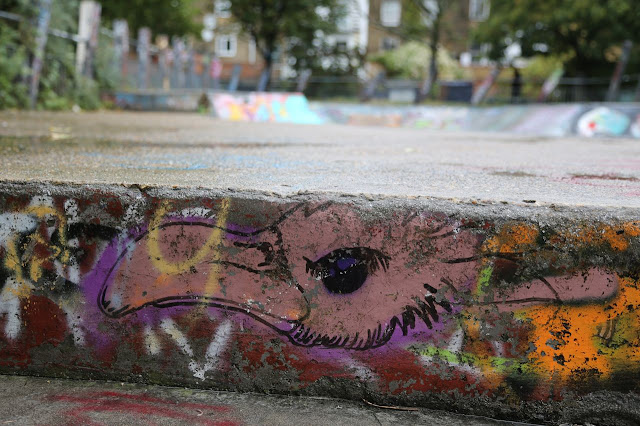 I think our caterpillar is dead. He's just hanging from the underside of a leaf. Dave thinks he's pupating, but he hasn't really changed color or anything. He's just sort of shriveled in on himself. I'm leaving him alone to see what happens, but I wouldn't say the future is bright for our Cabbage White.

I was cranky yesterday, and I don't know why. We had our neighbor over for dinner, so Dave spent the afternoon shopping and cooking. I, on the other hand, went running, got a massage and watched one of my favorite movies, "A Room With A View." So why was I the cranky one?

I dunno. I should point out that Dave loves shopping and cooking, so for him, that's recreational. As for me -- maybe I'm in a mood just because it's grown colder, and October is segueing into dark November. (Our clocks changed this morning, in fact. We're off Daylight Saving Time now.)

Dinner went well, though our neighbor is a World War II history buff, and particularly after a couple glasses of wine, you sometimes find yourself on the receiving end of a long lecture about the Blitz or the Battle of Britain or Dunkirk. A little of that can be interesting, but after a while my eyes roll back in my head. He does photography too, though, so I showed him my completed photo book, and he seemed interested.

Yesterday, Mitt Romney appeared in Florida at my old high school, which just blows my mind. When I went to school there, my hometown was a tiny, sparsely populated community on the outskirts of suburban Tampa. The school itself was in the middle of an orange grove. It's grown a lot since then, though, and I just can't believe it's changed so much that it now attracts presidential candidates!

(Photo: Someone's flamingo art at the skate park at Meanwhile Gardens, Oct. 1.)
Posted by Steve Reed at 6:45 AM