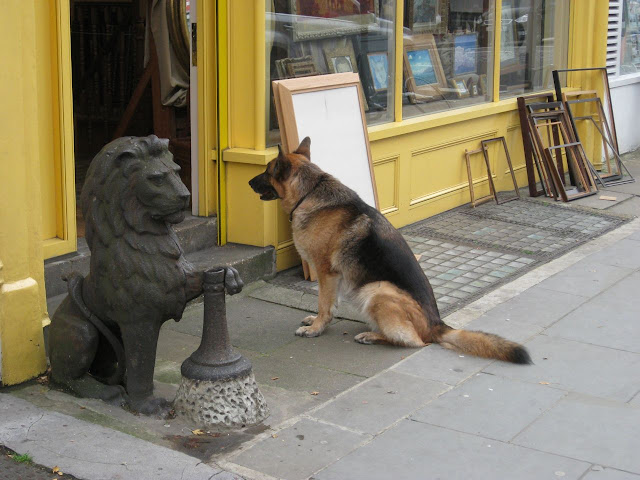 As I'm walking around my neighborhood in the crisp fall air, among the swirling, fallen leaves, I can't help thinking of Ernie and Ruby. It was a little more than a year ago that we brought them to England, so I associate the cooling weather with their presence -- taking them for walks, bundling them up under blankets by the fireplace, strolling up to Tesco to buy their little pork sausage treats.

In a few weeks it will be Guy Fawkes Night, which literally scared the pee out of Ernie last year.

Some of you will remember they were both old and frail, and as it turned out, they only lived with us here for about three months. During that time we struggled with all sorts of old-dog maladies, from incontinence to dementia. We finally put them to sleep on Dec. 30. I still miss them, and think about them all the time.

Dave has been watching boxer dog videos on YouTube, a sure sign that he's pining for another dog. And I definitely want one too. We've talked about how to go about it and when, but we want to hold off another few months at least. We have a friend visiting in November, plus two trips coming up -- Belgium at Thanksgiving and Florida over Christmas -- and we want to wait until those are past.

We've taken to calling our future dog Pickles. As in, "When are we going to get Pickles?" "If we go on that trip, what would we do with Pickles?" "Pickles would love this leftover bone."

We'll definitely get a rescue dog of some sort. Dave really wants a boxer again, while I would probably be less restrictive on my own. (In fact, I might get a cat! But Dave is allergic.) So I'm rolling with the boxer idea. We're going to contact a local boxer rescue organization. Failing that, we'll probably go to the local shelter, though Dave knows taking me to a shelter would be dangerous. We'd probably emerge with five dogs.

(Photo: Waiting patiently outside the frame shop, yesterday on Westbourne Grove.)
Posted by Steve Reed at 6:53 AM