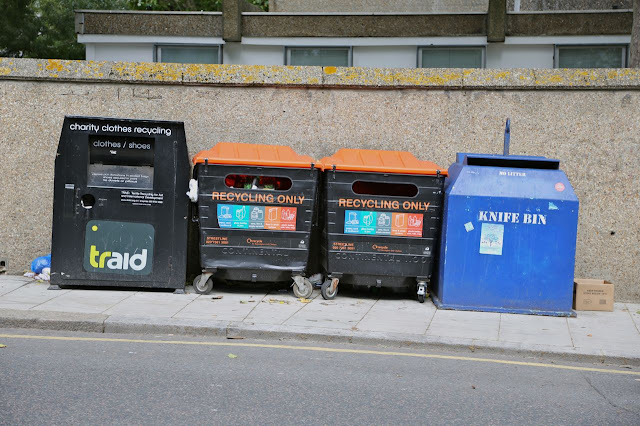 Here's an interesting discovery I made the other day near Trellick Tower -- a "knife bin." Apparently these have been set up in many locations around London so people can safely discard knives, which in the general absence of guns are the street weapon of choice. The organization that installed these bins says some have collected about 100 knives a year. It's a great idea, but I suspect the people who really need to discard their knives -- those most likely to commit a crime with them -- aren't going to drop them into the bin. It probably does keep discarded kitchen knives from becoming weapons, though.

I had a busy, active weekend. I went running on Saturday morning and then went for a walk in Soho, primarily to take a photo of a storefront that I've been meaning to capture ever since I became aware of its existence. (Photo to come at some point.) I stopped at a cafe, got an Americano with a dash of milk and sat out on Old Compton Street, watching the parade of humanity. That's always such a great neighborhood for people-watching.

(One thing about having a job -- I no longer feel guilty about little frivolous expenditures like stopping at a cafe for a coffee. I used to feel like I shouldn't spend on little luxuries like that, not because we couldn't afford them but because Dave was working and I wasn't. It just seemed wrong somehow. But now, no problem!)

Another little expenditure: I picked up a book called "Inside Notting Hill," about the history of the area, at our corner bookstore. (On sale for just £3.99!) It's been a fascinating read. Did you know that 42 years ago, Jimi Hendrix died in a basement room just a few blocks from where we live now? I went to see the building yesterday -- apparently it was once known as the Samarkand Hotel, but now it's an elegant yet nondescript residential building. I would never have known it as a rock n' roll landmark!
Posted by Steve Reed at 6:15 AM