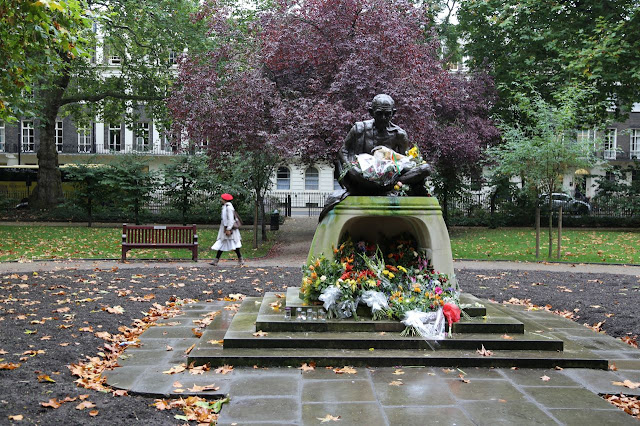 After working all morning yesterday, I decided to go to the Tate Britain and see the Pre-Raphaelites show, which I'd been told was terrific.

I didn't even know who the Pre-Raphaelites were -- I assumed, wrongly, that they were painters working before the time of Raphael. But no! They were painters of Victorian England who decided that art in the mid-1800s had grown decadent, and reached back to the early Italian Renaissance for technical inspiration. Their works are characterized by bright colors, finely detailed features and natural realism, depicting subjects such as Shakespeare's plays, Biblical stories and other tales from literature and mythology.

It was a beautiful show. Painters of the Pre-Raphaelite school include Dante Gabriel Rossetti, John Everett Millais and William Holman Hunt, none of whom I know well. I only knew one painting in the show on sight -- this one. I think it was in my college Humanities textbook, or maybe one of my high school literature books.

My only complaint is that the show was incredibly crowded. Entrances are loosely timed, but I still found myself bumping into people at every turn and straining to read about the paintings. I really hate that in museums. I got worn out about halfway through -- having already looked at an exhibit about Turner Prize nominees and some of the museum's permanent collection -- and skimmed the rest of the show.

By this time it was mid-afternoon and I was jonesing for coffee. Of course the museum cafe is cash only, and I'm so pathetic I didn't even have two pounds in my pocket to pay for an Americano. So I walked up through Pimlico toward Sloane Square and found an ATM and a little Italian cafe along the way, where I got my medicine along with a moist, delicious piece of carrot cake.

It's clear and cold this morning, supposedly 37 degrees according to my iPhone. I brought the plants in last night, even though we didn't quite hit freezing.

Oh, and get this -- I bought some cabbage yesterday, specifically to feed our caterpillar. (I was going on the theory that it's a Cabbage White.) And the damn thing won't eat it! Instead he appears to be nibbling the surface of one of the amaryllis leaves, but only reluctantly. He vigorously ate a piece of kale the other day, so maybe I'll try to find him some kale. Meanwhile, we're going to be eating some cabbage around here.

(Photo: Statue of Mahatma Gandhi in Tavistock Square, on Oct. 11.)
Posted by Steve Reed at 6:34 AM