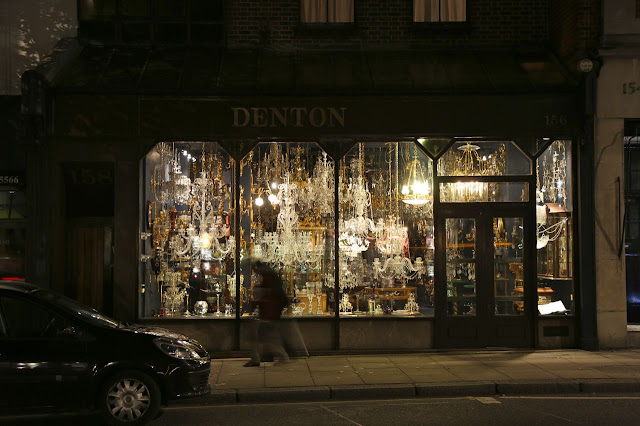 Need a chandelier? I know just the place.

I photographed this shop in Kensington during the day a few months ago. But when Dave and I passed on Saturday night and I saw the window, I realized I really needed to get a night shot. So I went back on Tuesday night and hovered suspiciously across the street long enough to take about 20 shots, of which this was my favorite.

I have a weird tendency to take photos that are just slightly askew -- I have to straighten almost all of them about half a degree once I get home. Why is that? I came to suspect my old camera had some kind of internal flaw, like a tilted sensor. But it happens with the new camera too, which makes me think it's my eye that's tilted!

Anyway, on the way home I popped into Bubbleology, a relatively new shop on Portobello Road that specializes in Taiwanese-style bubble tea. It seems like an awfully narrow product range and I'm not sure how much profit there could be, so I hope the place makes it. I like a good bubble tea now and then.

I took our unnecessary new router back to the store yesterday. It felt good getting that £129 back!

I've been seeing the polls on the presidential race, and the apparent "bounce" that Mitt Romney received from the debate. I'm mystified by this. Are there really voters who are so on the fence that one debate can change their mind? And why would one debate be enough to do it? I reject the premise that anyone "wins" a debate -- I think it's more of a discussion, and I think Obama did a good job and sounded presidential. Romney was deemed the "winner" just because he didn't fall on his face, which is what everyone expected.
Posted by Steve Reed at 6:43 AM

I just had to laugh at your skewed photos. Mine are the same way! It's just the weird way we hold our cameras: not straight! Mine has a grid that I can turn on but only in Live View which I never use. I did buy a bubble for my hot shoe but of course I can't see it when I am looking through the viewfinder. I do check it to see if I am holding the camera straight and I am always amazed when I adjust the camera to what the bubble thinks is level and it feels like it's crooked to me! So, I use it as a training tool. If I get used to what is really straight I might start realizing when I am not. Only time will tell.

I think your new camera might have a grid that you can turn on?

I will be so glad when this election is over with. Just as long as Romney doesn't win! ;)

I have never in my life been able to be straight about anything (except my sexuality - ha!). I just gave up & decided that it was part of my charm - my gimmick. Mike straightens his crooked pictures, but I always leave mine askew. Isn't there some philosophy that says to add a flaw to everything?

what the heck is bubble tea?

I agree. There can't possibly be that many undecided voters still. And I'm appalled at the support otherwise intelligent people give to Romney. Every time he opens his mouth he is either telling a lie or contradicting himself or just saying 'trust me' instead of telling us what he plans to do. I wouldn't trust that guy as far as I could throw him.

I'm unclear that we can ever trust the polls.

I love your unique tilt on the world. I also love it that you feel compelled to balance and straighten what you see through your camera. I would love to see some of the tilt shots, uncorrected. Yes?

I have no idea what bubble tea is, but I love the name.

Lynne: I'm glad to hear I'm not the only one. It drives me CRAZY. I'll look for that grid option -- I haven't come across that yet.

Bug: There's something to be said for appreciating crooked photos. I tend to like things that line up just right, which I suppose says something about my personality.

Ellen: Click the link in the post for an explanation of bubble tea. It tends to be very sweet, more like a dessert than a glass of tea.

Reya: The problem is, my shots are not charmingly tilted. They're annoyingly tilted. It's just enough to be noticeable, but not enough to produce any real photographic effect, you know?