Today's the day I turn 46. It's such a middling, non-descript age, not quite old but not young, either. It doesn't feel particularly transformational. It's just another day.

Dave and I don't have any major plans for today. We're celebrating tomorrow night instead, with dinner at The Savoy Grill, Gordon Ramsay's restaurant. I'm not particularly a fan of Ramsay -- I was put off by that television show where he treats everyone so badly while trying to reinvigorate their sagging restaurants. I mainly wanted to see the Savoy Hotel, a legendary London destination, and his restaurant just happened to be there.

I'm so looking forward to having a martini at the Savoy hotel bar. Doesn't that sound civilized? Very Noel Coward. 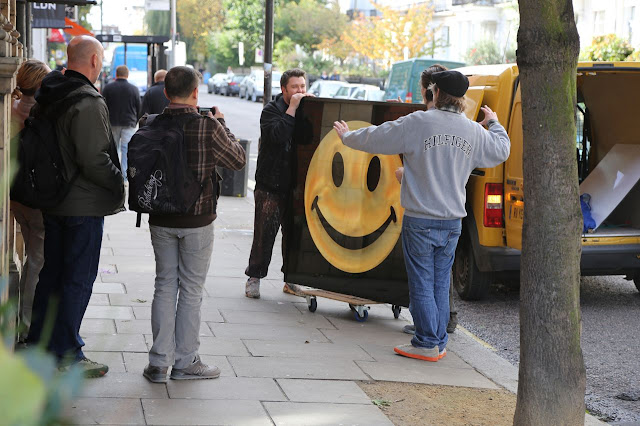 Anyway, that's tomorrow, not today. Today I'll be staying home, finishing my Malcolm Gladwell book, catching up on my New Yorker and Harper's magazines, waiting for the window repair guy (yes, again) and finishing up a few work assignments. And maybe running, if I feel like it.

Yesterday I met a coworker of Dave's at the St. Pancras train station to drop off an envelope full of recorded student auditions for an international honors band. The judges are meeting this weekend to select participants. But that's not the important part of the story, at least for me -- Dave's coworker also purchased a poster-sized print of this photo, which I delivered and for which she paid. It's always gratifying when I can make some money from photography! 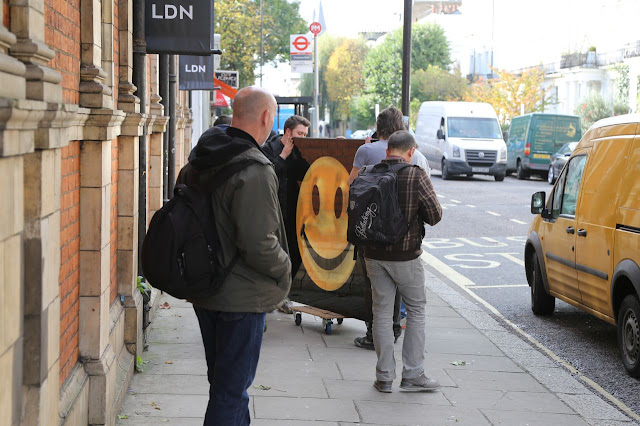 Last night we watched Peter Sellers in "A Shot in the Dark," from 1964. I loved that movie as a kid and hadn't seen it in years. It's laugh-out-loud funny. I might go on an Inspector Clouseau binge now.

(Photos: Guys unloading a big smiley-face artwork outside a gallery on Westbourne Grove on Tuesday. I'm not sure I'd want that thing peering down from the wall at me, would you?)
Posted by Steve Reed at 6:28 AM