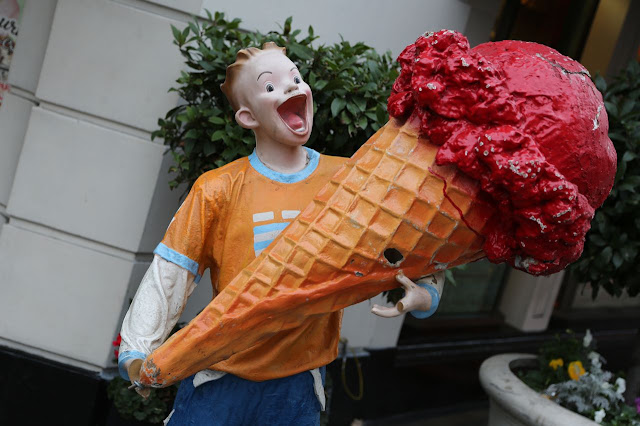 Is this not the most disturbing thing you've ever seen?

For me, it certainly ranks right up there. I found it standing outside a cafe and ice cream parlor on Edgware Road just before Dave and I went to Belgium. In addition to having a big scary mouth, this boy is missing the index finger from his right hand, and his left hand seems to be gone entirely. And the cone has apparently been colonized by a woodpecker.

It's even more alarming when viewed from the back. 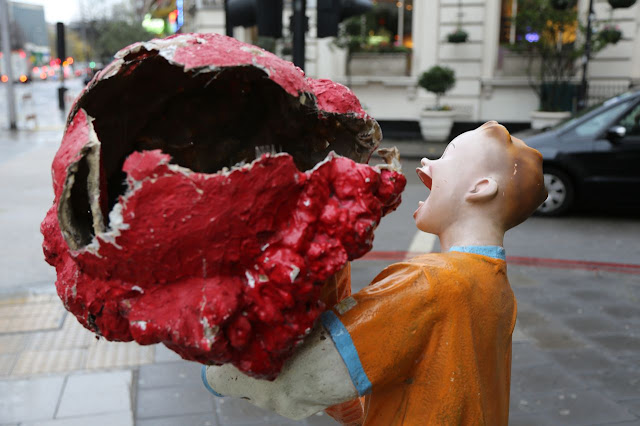 This is trash, people. It needs to go out in the next dumpster-load straight to the landfill. And I believe in recycling and reuse in every way possible, so I do not say that lightly.

-- I have made a major decision. I have decided to give up running. There comes a time when you realize that what used to be fun just isn't fun anymore. It's painful and unpleasant and fatiguing. Running no longer brings me the surge of energy I used to feel. It depletes me. So from now on it's walking for me.

-- My cold is much better, thanks!

-- I had the Glen Campbell song "Dreams of the Everyday Housewife" stuck in my head all day yesterday. Have you ever listened to that song? Lyrically it's completely insipid and unforgivably sexist, describing as it does a woman who is so unhappy with her life that she dances around pretending to be at her high school prom. Unfortunately it also has a catchy melody. (For some reason I am particularly prone to Glen Campbell earworms. "Wichita Lineman" is another common culprit.)

-- I've submitted a photo book proposal to a real, commercial publisher. The law of averages suggests it will be rejected, since most people have to go through dozens of proposals before they get a nibble. But it feels good to have taken that step.

-- I saw Christmas trees for sale on Portobello Road yesterday, so the season is indeed upon us. It looks like Dave and I won't be decorating this year, though. There's really no point, since we're flying back to the states on Dec. 22 to visit family. Those trees will have to find homes with someone else!
Posted by Steve Reed at 6:06 AM