A Jaunt to the Park 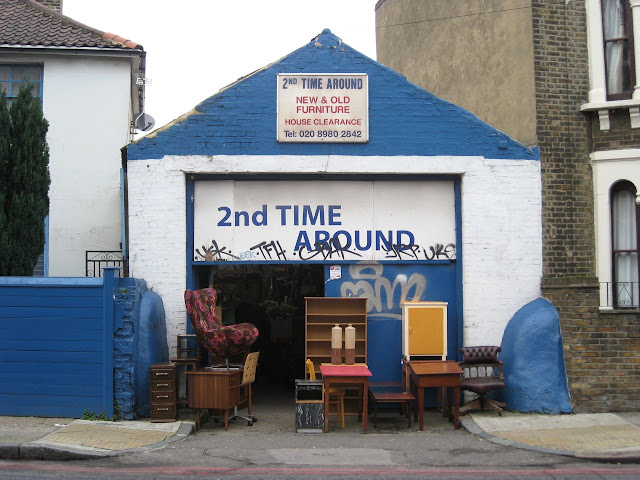 Why are used furniture stores so photogenic? They're like barbers and dry cleaners. I can't get enough of them.

So, Mona is wearing me out. She's a ball of energy! Yesterday I took her on a walk to Hyde Park, which would have been an unthinkable prospect with Ruby and Ernie, old as they were. It was all I could do to get Ernie and Ruby around the block. Mona tackled Hyde Park with zest and vigor. We walked all the way to the Albert Memorial, on the park's southern edge.

She's a pretty good leash walker, though she does get enthusiastic and do a lot of tugging. She also lunges at the occasional pigeon. But she's fine with the other dogs she meets, and people always comment on how beautiful she is. That's our Mona, quite the showgirl.

(The name is still unofficial, by the way. Dave has not signed off. Last night he proposed Rosie, but I argued that Rosie is just too pedestrian. So we're still in no-man's-land.)

I gave Mona a squeaky tennis ball which she immediately shredded. So I bought her a Kong ball, which is virtually indestructible, and she loves it. We went out yesterday afternoon and chased the ball for a while in the grassy yard of our apartment complex.

That dog slept soundly last night, as did I.

Meanwhile, I've had loads of work scheduling substitutes. Everyone is planning their absences for spring, I suppose. It's fine for now, because I'm sort of stuck at home with the dog -- we don't want to leave her alone yet, even to go to the store, because we want her to feel secure here. Eventually I'll make little forays out for short periods to see how she does on her own.

One good thing -- she is not a barker. I haven't heard her bark yet. She does moan when she's happy, and she makes little squealy noises when she's excited. But no barking. Which is fine.

(Photo: Mile End, on the way to pick up Mona on Wednesday.)
Posted by Steve Reed at 6:49 AM

Steve, you said ...
'That's our Mona, quite the showgirl.'
and I immediately thought of these lyrics from Copacabana:

"Her name was Lola, she was a showgirl"

Are you sure you don't want to call her Lola? :)

I think that really truly need that flowered chair in the picture. How much do you think shipping would be?

Perhaps you should name her Olive. She reminds me of Olive, the other reindeer.