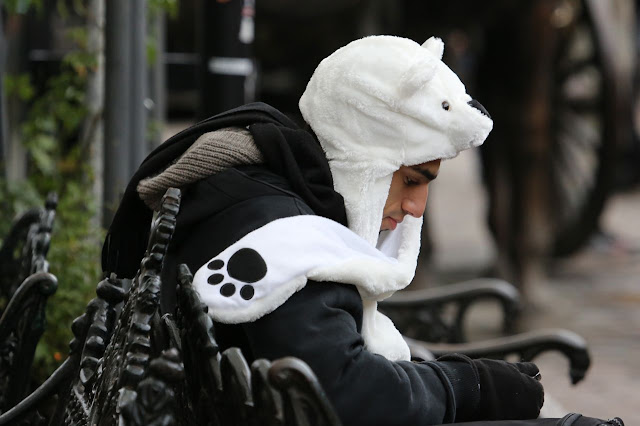 Olga is now back home and more or less back to normal, sans internal womanly parts.

I dropped her off yesterday at the vet without too much drama. Under the direction of the dog rescue agency, I had to pretend her name was Thelma -- the dog for whom her appointment had originally been made. (Where the real Thelma went, I'm not sure.) We not only had her spayed but also microchipped and blood tested for general health.

She was a wild, mischievous thing, a bundle of nerves, in the vet reception. When I picked her up several hours later, the difference couldn't have been more dramatic.

She was so drugged she could barely stand up, and of course she was wearing one of those ridiculous, awkward plastic cones to keep her from licking her wound. Poor girl. She wagged her tail when she saw me, but then promptly rested the wide end of the cone on the ground and fell asleep -- standing up.

She was indeed microchipped, but it turns out the chip is registered to the dog rescue agency, because we're not yet Olga's official owners. (Technically, we're still foster parents.) We have to call the rescue to have the registration transferred when the adoption is finalized. And then, I wonder, whose registration is it? Thelma's?

Anyway, the cab ride home was interesting. I had a Pakistani cab driver who was very intrigued by the dog's condition. He asked whether she was sick, and when I explained she'd been spayed, he asked how much it cost. It was free, I told him. (There are low-cost fees for some spays, but interestingly, staffys and bull terriers are spayed for free -- I assume because there are so many of them.)

Just a week, I said, trying not to laugh at his usage of what I know is a perfectly acceptable word in that context.

All this time, I'm literally holding the dog up on the floor of the cab, and trying to give directions to the driver, who didn't seem to know his way around Notting Hill. (He was a private car service driver, not a black cab -- those black cab guys know how to get anywhere.)

Olga was happy to get back to the flat, but clearly frightened by her altered sense of perception. I promptly removed the cone, because she was practically unconscious anyway and no wound-chewing was likely to occur. She lay down and slept so soundly for so long that I was afraid she'd been over-anaesthetized, and maybe brain-damaged. She did manage to eat a little food before crawling into bed with us.

This morning she awoke bright-eyed and more or less her normal self, if slightly less energetic. I'm still avoiding the cone. She hasn't shown any inclination to chew her wound, or even any awareness of it, so I'm just going to keep an eye on her.

(Photo: Camden Market, yesterday. While Olga was at the vet I seized the opportunity to do some photography, though it was a frigid, gray day and I had to force myself to be outside!)
Posted by Steve Reed at 6:22 AM

She will be back to her normal self soon. It's sad, though, isn't it, when they're all drugged up and you can't tell them why.
That picture is awesome.

That picture IS awesome - his serious face, the silly (and fabulous) hat and the title of the blog post - just great.

Poor little Thelma/Olga :( She and I are glad THAT's all over!

Love that picture. Poor Olga. The handful of dog surgeries we've experienced, the cone hasn't been necessary until a few days after the surgery, when the patient is no longer so drugged and the stitches are starting to ITCH.

So, keep an eye on Olga/Thelma lest she become an itchy-stitched bitch.

yeah, great picture. Hilarious that a grown man would wear that out in public. glad Olga is back home.

cute animal hats for grown ups seems to be quite the fad this winter. I appreciate the parade of hats, the goofiness, the fact that they are really stuffies. Little Olga, so glad that she will have no memory of this event, although when you try to take her to the vet again she may try an escape, dat bitch.
If you do make brownies use butter, not shortening, and butter/flour the pan generously, do not overcook, add semi sweet chocolate bits for more oomph and chopped nuts. Do not eat five in one go...ick.

That picture is awesome, particularly given the image you painted of Olga falling asleep while standing --

Hah! Looks like he's getting a bear hug from his hat. He looks nice and warm at least.

Different kinds of anesthesia can be hard on dogs. I assume you picked her up fairly soon after she was out of surgery? My vet usually won't let us pick up our pets until about 4 or 5 hours after surgery and they are mostly ambulatory by then. It's so hard to see them "under the influence."

Olga-Thelma will bound back quickly. I'm with you: forget the e-collar unless she really needs it. She will thank you for it and so will your furniture and your legs! ;)

Bless her! Transferring the chip details was a trauma for us. We had to have the original owner's signature which we do not have so they requested us to send a hand written letter of how we got her.

Still haven't heard back. Oh the joy of dog ownership!

P.S - The inside death row documentary is on ITV Player - definitely worth a viewing :)

Ms Moon: I always feel bad about all the bewildering things that dogs confront. I so wish I could explain it all to them!

Bug: Me too, believe me!

Lorianne: LOL! So far, no cone!

Ellen: It cracked me up when I saw him.

Linda Sue: I wondered if these animal hats were as big in the states. They're everywhere here.

Elizabeth: She's sleeping at the moment, too! Ah, the life of a dog.

Lynne: It was a few hours afterward -- I'm not sure exactly how many. I think they just really hammered her with anaesthesia. (She's a very spirited dog.)

Wayne: Oh, don't get me started. I was so annoyed that they suggested microchipping and then said they couldn't register it to me. What was the point?! I know transferring it is going to be a nightmare. But at least she HAS one, which might make a rescuer realize she is owned if she gets lost.

I so hope she's not registered as 'Thelma.' Sorry all you Thelmas out there. I still laughing over the driver's remark...what a hoot!