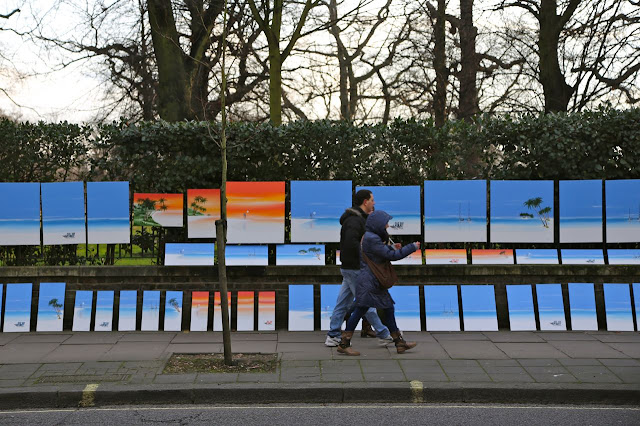 -- We did indeed get some snow last night, but just a dusting. I'm sure it will all be gone in a couple of hours. Nothing very dramatic or even photo-worthy.

-- Dave and I went to see "The Master" over the weekend. It was a very slow-paced, strange movie. Dave emerged convinced the whole thing was some kind of dream, a la Bobby on "Dallas." I didn't get that impression. There were some unanswered questions, but then, the writer and director is Paul Thomas Anderson, the same guy who made frogs rain from the sky in "Magnolia." He never explained that either! The cast and the performances were impressive, but I'm not sure I enjoyed the movie as a whole.

-- We also rented "Three Days of the Condor" with Robert Redford, one of my favorite films from the '70s, this weekend. And we began watching "The Killing," which looks like it will be our next series. (Since we can't rent Season 2 of "Homeland"...grrr...)

-- I cut myself on Dave's big kitchen knife last night. I was helping him make macaroni and cheese by cutting the rind off a piece of cheese. Stupidly, I was pulling the knife toward me, and it popped through the rind and into my finger. (This was the knife I just had sharpened.) Fortunately it's not a bad cut and there wasn't much blood, but I had to resort to band-aids.

-- I had a great day yesterday walking up Bayswater Road, along the northern edge of Hyde Park, and along Oxford Street all the way to Tottenham Court Road. I encountered lots of peculiar characters and sights, like an artist selling balmy paintings of beaches and palm trees on a frigid Northern European winter day (above).

-- I just have to point out that I racked up 356 blog posts last year! Since I never post more than once a day,  that means I posted just about daily. My best, most consistent year of blogging so far!
Posted by Steve Reed at 6:41 AM

You have such a good eye. And congratulations on your consistency in posting!

I'm kind of scary around knives (as in, Mike can't watch me use one). And yes, I do cut myself periodically. You'd think I would learn!

You made me go look - I had 211 posts last year - down from my all time high of 279 the year before that. I had several months where I considered just taking a break from blogging entirely & it shows!

P.S. I kind of LIKE the wine color of the shop front in the previous post - it's my favorite color to use at Christmas time :)

I absolutely love this photo! When I first saw it I thought the blue was something completely different. But paintings! After reading your post it all became clear. Maybe the artist was trying to inspire people to think warm! Love the sunset painting right in the middle for that extra pop of color.

P.S. I've gone to the ER three times to have a finger stitched back up after close encounters with knives. I am not to be trusted with a trusty blade!

I look at that guy's paintings and think I would get so bored painting the same thing over and over. there are glass artists who basically do the same piece over and over with little variation. ugh. re the knife. back when I was a river guide, the knives we had on the river were not the sharpest. One week, the outfitter sharpened all the knives and we had several cut fingers on the next trip.

OW! DANG! Glad you did not lose your finger! Great that you post nearly every day- Keep living groovy life and you will never run out of interesting posts! I am on snooze I think, just so same same here. Must get out in the world and find marvelous things , darling sweetie...