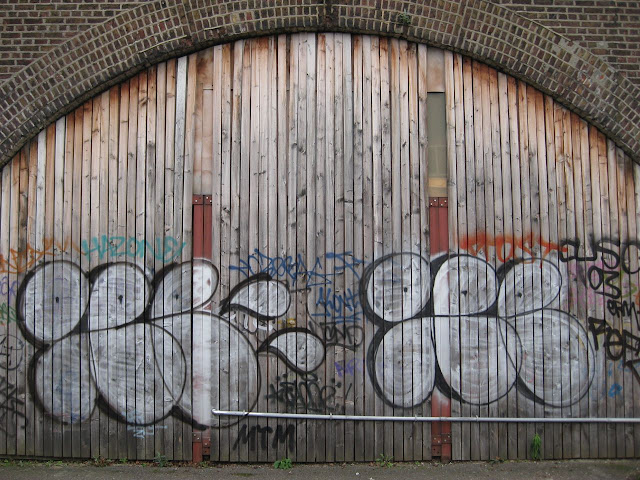 Having Olga around has certainly shaken up our routines, in both positive and negative ways. For example, when I get up in the morning, my priority now is to get the dog outside. I throw on some warm clothes while she leaps around hysterically, somehow manage to wrestle her into her collar and leash, and we cram into the tiny elevator. Outside I try to take her on a fairly long-ish walk so she can work off some morning energy. So I usually go several blocks. Sometimes, we run.

Only when I bring her back do I get to make coffee. As anyone who knows me can attest, coffee in the morning is one of my greatest pleasures, so for me to forgo it even for half an hour is a considerable sacrifice!

On the other hand, it's cool to be outside at 5:30 or 6 a.m. when the streets are dark and silent. Occasionally there's a chittering bird overhead, or we might see a lone pedestrian, but for the most part the neighborhood is ours. If it weren't for Olga, I'd never be out at that time of day. 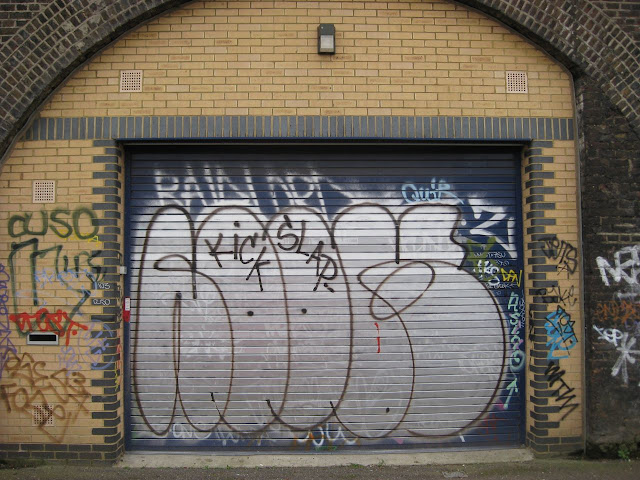 We're still trying to work out her feeding schedule. Right now she gets one can of food in the morning and one at night. But she still seems so hungry. I'm toying with giving her a third can at midday. I'd rather have her gain weight than lose it, and we could then adjust accordingly.

She's still very good-natured. Yesterday I took her to the photography store on Portobello Road, where I was having some negatives scanned, and I was mildly terrified that she would lose her cool in the shop and poop on the floor. I kept a super-vigilant eye on her, but she did very well. She seemed a little freaked out by all the people -- yesterday was the Portobello Road Market, so the street was fairly crowded -- and when some nearby church bells started clanging she put her tail between her legs and scurried for cover.

The world must be a confusing place when you're a dog. 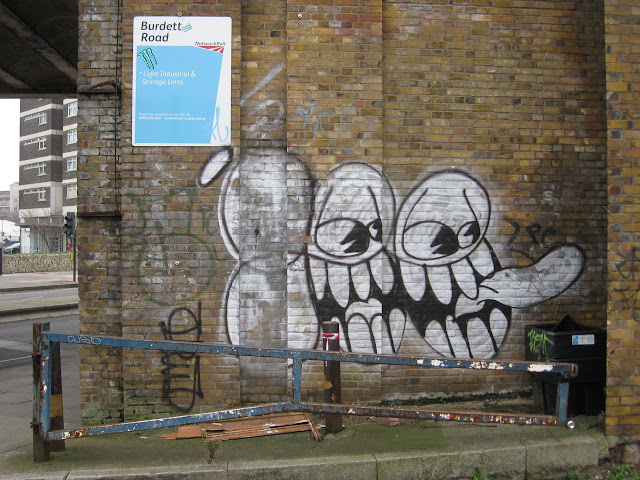 Other than running some errands I didn't get out much yesterday. I hope to have a chance to do some more exploring today.

(Photos: Graffiti by Gee, top and bottom, and by Look, center -- all taken at Mile End when I picked up Olga on Wednesday.)
Posted by Steve Reed at 6:37 AM

Ahh, postponing your morning cup of joe is one of the many sacrifices of new parents. Chin up, though! Your a pooch pappy now, which actually comes with a whole new set of rewards.

I think the world is confusing even for we human beings, but we're a lot better at bluffing than dogs. So much better.

I hear you - about getting outside before coffee. I did that for fourteen years with Jake. Whenever I manage to get myself outside nowadays in the early morning, I'm always so happy I did.

Olga is a blessing, as are all dogs. And also a pain in the ass, as all dogs are.

She is so lucky to have come to your house! Wow.

This post inspired me to take Cal out for an early morning walk this morning. Normally Ed is on morning walk duty but it was so relaxing to get out before the world started revving up. And as always Cal was very appreciative. :)

Routine with silver linings are the best.

Does Olga whine? Skye whines and howls from about 5am - so much so, she has had to come into the bedroom. Not had a problem since. Cheeky little beggar!

Better you than me. That's all I have to say about that.

This is precisely why I love having a yard. Open door: let them out. ;) When we travel with them and don't have the luxury of a fenced yard we make them eat their breakfast first (while we have coffee) and then take them out after they finish. We found over the years that they are more likely to get all their business done if they've already eaten.

Either that or might I suggest a programmable coffee pot where you can grab your already-made coffee and take it along with you on your walk!

Walk to an espresso shop with a happy girl early in the morning sounds just right to me. Lately I have been taking Dexter out for two walks in the day, Three let outs on the yard- leashed of course and in the middle of the night or at 2:00am he thinks it is a good idea to want a biscuit , a drink of cold water and a piddle. Adjusting to a new being in the house is quite a jolt. Olga is so good, what a pretty pooch she is.Lucky that Dexter is deaf now, The noise of the world does not make him nervous anymore.

put your coffee on, go for your walk, and when you return it will be ready for you. When we had out boxer, we also had a fenced yard so walks weren't necessary. Regardless, I would take her for a walk every morning between breakfast and getting down to work. She would be fine until she saw me putting my tennis shoes on. that was her cue. then she was all wiggly and excited and out we would go. I usually let her off the leash when we got to the park because at that time of day there wasn't anyone else there.

This makes me wish I had a dog to walk. How much will Olga weigh when she is fully grown?

Nancy: This is true. The rewards far outweigh the sacrifices.

Reya: We're all confused! No question!

Gary: It really is great to walk around when no one else is awake! Relaxing is a good word for it. Getting out of bed is the hard part. :)

Lynne: A yard would be terrific. I can definitely see the appeal! I think carrying coffee would be more trouble than it's worth.

Linda Sue: No espresso shops are open that early, even in swinging London!

Ellen: I'd love to try Olga off leash in the park, but we're still not sure how she'll react. Will she just keep running and not come back to us?! Ha!

E: I'm not even sure how much she weighs now. We haven't been to the vet yet. But she is more or less full grown, and if I had to guess, I'd say she's about 30 pounds.