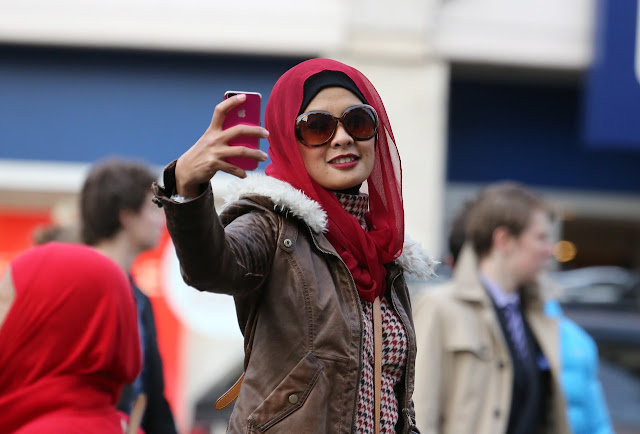 We had a brief burst of nice weather yesterday. The sun actually came out, unheard of lately, and since Dave was home with the dog I seized the opportunity to go walking through Mayfair, Piccadilly and Soho. I had a good time and got some good photos. This morning it's rainy again and the news says parts of England are ripe for flooding, between the rainfall and melt from the recent snows.

On a serious note: In East London a group of young men calling themselves "Muslim Patrol" have been making videos of themselves harassing pedestrians for not being compliant with Muslim laws. They harassed a woman wearing a short skirt, a man who they believed to be gay, people drinking or carrying bottles of alcohol, even a couple just walking near the mosque. The mainstream Muslim community has condemned their activities and some of them have been arrested. There are theories that the videos were made by far-righters to stir up anti-Muslim sentiment, but the guys speak Arabic and they seem pretty authentic to me. As a gay man who cherishes living in a tolerant society, I find this pretty alarming.

On a happier note: Have you ever wondered what happened to Andrew Ridgeley?

And finally: If you aren't too sick of my Morocco photos, and you haven't already seen it on Facebook, check this out. In 1992 I took a series of photos I intended to combine into a single panorama of the town where I lived, Ait Baha. Back then I would have had to Scotch tape the pictures together. But with modern technology, I can combine them digitally into one seamless image. Pretty cool, huh?

(Photo: A woman at Piccadilly Circus yesterday. We all need a little glamor in our lives!)
Posted by Steve Reed at 6:57 AM

The photo of that woman is stunning.
As a human being, the idea of self-proclaimed societal enforcers scares me. WTF?

As if we need to stir up racism. Good lord.

Every person harassed by those people should immediately push back. They should respond in a very loud voice accusing them of harassment, telling them they do not have the right to do so, that this is not a Muslim society, and immediately use their cell phone to call the police to report them right there and then.

Truly alarming! I hope they are kept in check.

I have never figured out why people love to take photos of themselves with their phones. Seems pretty narcissistic to me! She is pretty glamorous though, like an old-time movie star. I'm betting you had your big zoom on, eh?

Very cool pano! And the photo of the woman...great capture, great timing, great colors! Well done! Re. the Muslim harrassment...some way, some how, someone has to stop the insanity. Take care!

The Muslim Patrol? WTF is right! I hope that enough people can rise up and squash these folks before they do any more harm moving the world backward.