Return of the Ghost Dog 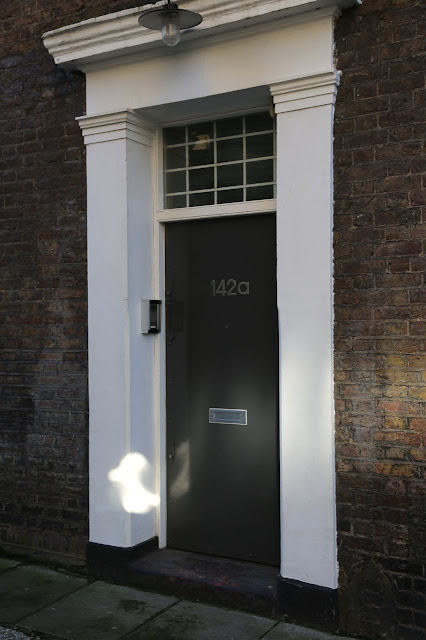 I was walking in Portobello Road yesterday when I noticed the Ghost Dog is back -- that little light spot on the doorway around the corner from the shop that served as the bookstore in the movie "Notting Hill."

In late December 2011 I photographed this same light spot -- at a slightly different time of day, which gave it a different placement on the door. I used the photo to illustrate a painful post about our decision to euthanize our two old, sickly dogs, Ernie and Ruby.

That's why I think of this spot as the Ghost Dog.

It was interesting to see it again, at roughly the same time of year. Something about the angle of the sun, I suppose, and the way it hits whatever glass surface creates this reflection.

We put Ernie and Ruby to sleep on Dec. 30, 2011. A few weeks ago, when we were in Florida, I made a mental note of the anniversary, but didn't write about it. I didn't even mention it to Dave until a day or two later. Being busy, busy, busy with family helped us traverse what could have been a sad, solemn day.

Mourning is such an interesting process. It's so intense at the beginning you literally think you might die. It hurts even to breathe. And then over time, all that pain subsides to a reasonable level, like a mountain sinking into the sea. It becomes more like a dull ache. (I realize this isn't a particularly deep observation -- we've all been through it, right?)

I can honestly say that now, while I still miss Ruby and Ernie, I think more of our happier moments than the sadness and regret that accompanied their ending.

We're still taking tentative steps toward getting another dog. Dave has contacted some rescue organizations, and I'm thinking a visit to the Battersea Dogs' Home may be in order -- though Dave has expressed worry about taking me there, fearing that I'll come home with as many dogs as I can carry!
Posted by Steve Reed at 6:37 AM

Yes. I think you are ready to bring another dog home to love.

I think the little Ghost Dog is a sign. It's meant to be!

So you think you might adopt instead of getting a pedigreed dog from a breeder? There are so many worthy dogs just waiting for a new home in this world. Which one though is the question. I would have a hard time looking into all those eyes and choosing only one.

We are facing the decision to create our own ghost dog scenario unfortunately. Henry is struggling.

You've described grief pretty accurately (although I also still have moments of intense grief over my mom, 8 years later). Mostly I remember the good stuff though.

I can understand Dave's concern - it would probably be hard for me to just pick one as well.

Right now we have a cat and a pick up truck. One bench seat that we all share when we go back and forth from country to city. Yes we bring the cat with us. She travels well, very calm and mostly sits on the arm between us but sometimes goes into her safe place (her carrier behind her on the arm with the door open) when the traffic is freaking her out. Don't know if we'll ever get a dog again. We had a wonderful boxer and her death was very traumatic. Can't quite get past it.

Yes to everything you say here, including the bit about the Battersea Dogs' Home. I'd be a weepy, emotional wreck in a place like that.

This winter I've been having lots of moments where I'm grateful Reggie doesn't have to struggle with the snow & ice anymore. I remember the good times, but I also remember how hard he had it in the end. I'm hugely grateful we were able to give him a "comfortable" death in the end.

It would be one or two lucky dogs to go home with you and Dave. Thank you for sharing the grief part- the feelings that bowl you over- when I try to express loss it just gets stuck in my throat - won't come out and it does not feel nice at all. It is difficult to watch Dexter getting old and funny-ish. I know that he will leave in another few years- I will never get another pooch, I tell myself.