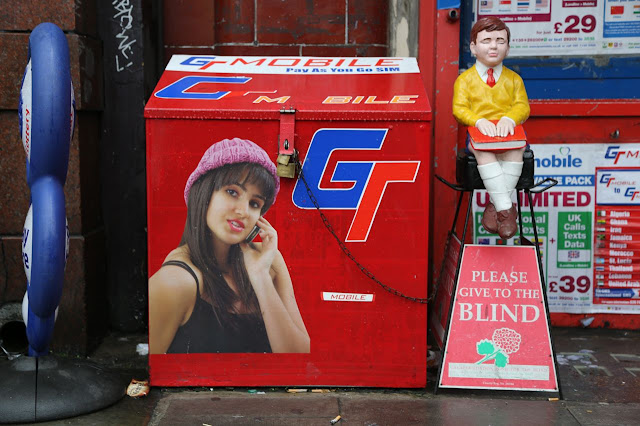 Boy, did I sleep last night. Not an unusually long time, but unusually soundly. I was unconscious right up until I woke at 5:45 a.m. and I feel like I could sleep more.

Yesterday was full of all the tasks associated with post-vacation settling back into routine. I went to the cleaners. I went to the grocery store and bought a bunch of fresh fruits, vegetables, dairy and other stuff to replenish our depleted refrigerator. I unpacked everything -- the Pietà is on the bathroom windowsill, as planned. It feels so great to be home.

Last night Dave and I watched some TV, but poor exhausted Dave could barely keep his eyes open and he crashed about 7:45 p.m. I stayed awake until our normal bedtime -- 10 p.m. -- in an effort to get back on schedule. I watched a terrific film called "What Have You Done Today Mervyn Day?" about East London before it was transformed by the new Olympic park. I love the cinematography -- long shots of old, deteriorated buildings and storefronts, just like the ones I often photograph. I'm going to watch it again before I return the DVD to Sally.

Today I'll get out and do some photography, hopefully, as well as run a few more errands.

(Photo: Edgware Road, mid-December.)
Posted by Steve Reed at 7:16 AM

Glad you slept so well - that will definitely help you get back in sync.

we never get anything done the first day or two home from traveling. often the suitcase doesn't get unpacked until two days later. but it is nice to be home after traveling.

Jet lag! :) It always takes a few days to adjust to being off by a day. I hate that! Don't you find it worse going East instead of West?

The composition in that photo is prize-winning. And charming.

how productive you are just getting back. i love - the story of the pieta and can see how it captured your heart. i can identify completely ....the fact you left it and it was still there when you went back the next day meant it was waiting for you! all the letters and odd juxtapositions in today's photo are great.