Getting To Know You 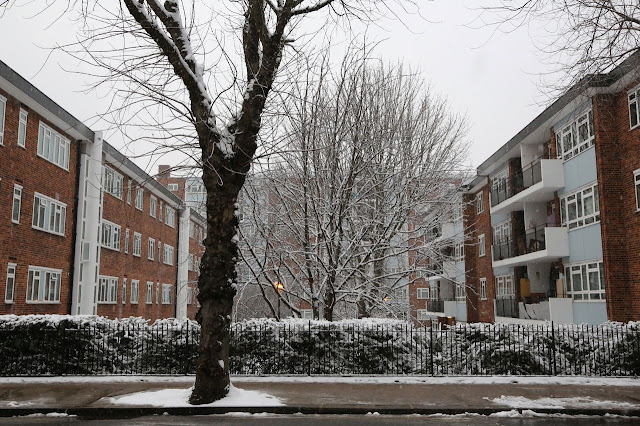 During the past week, Olga and I have been learning about each other.

I have learned, for example, that Olga is basically a sidewalk vacuum cleaner. Her life as a stray has trained her to trot along the pavement and discern instantly whether a morsel of street trash is even vaguely edible. If so, down the gullet it goes. Candy wrappers, chewing gum, ice, grapes, bones; you name it and I've seen her seize on it and more than once, before I could do anything, get it into her stomach.

I know, I know -- I shouldn't be letting my dog eat that stuff. You try to stop her.

It doesn't seem to be doing her any harm, at least not yet. She's capable of walking great distances and maintaining her puppy-like energy. Yesterday we walked 3.5 miles to the Albert Memorial and back, and in Hyde Park I let her off the leash and threw sticks for her to fetch. She loves fetching, even though wrestling the stick away can be a challenge. (Oh yeah -- wood! That's another thing that ends up in her stomach.)

Then she came home and slept the sleep of the dead, until it was time to eat again. Ah, the life of a dog.

I've learned that I can't have her with me when I'm trying to take photos. She jerks and yanks on her leash, rendering every image blurry and off-kilter, and if I tie her to a post or tree, she stands on her back legs and pulls like a Volga boatman. Rather than endure that public spectacle, I've been experimenting with leaving her alone in the apartment for brief periods. She seems fine with it. I think she just naps. Hopefully soon I'll be able to get out, run errands and explore again for a few hours at a time.

I'll definitely be able to explore today, because Olga will be occupied with a visit to the veterinarian. She'll be getting spayed, and perhaps microchipped and vaccinated (if she still needs any vaccines). This is all being done by the dog rescue agency, but I have to get her into a taxi and take her to the vet. I feel guilty because I've been forbidden from feeding her this morning, and I'm afraid she's taking that as a sign that her wonderful idyll in our home is about to grind to a halt. I want to telepath into her brain: "We are not throwing you out."

It's expected to be cold and cloudy today, but at least not snowing -- a nice change from the past several days!

(Photo: Portobello Court, a large apartment complex across the street from our apartments, a few days ago.)
Posted by Steve Reed at 6:21 AM

Weird, the things dogs will eat. Consider yourself lucky she's not into cat poop.

I'm just glad it's you and not me dealing with all of this. Seriously.

Yeah I'm with Ms. Moon. I'm thrilled that you enjoy having a dog, but it sounds like so much work to me (much the same way I feel about children - ha!).

Just think how ecstatic she's going to be when you bring her back home :)

Oh, is she going to be p.o.'d when she gets home...LOL This too shall pass and she'll be a changed animal. Good luck!

training is everything- Ask Caesar! Perhaps a muzzle would help discourage her for a while- ingestion of stuffs possibly tragic.When I took Dexter in to emergency for raccoon attack there was a lovely Basset there whose folks were just waiting for him to succumb to the indigestible long fibers of a rug he ate. Very sad. Nothing could be done.
Sit, Stay,heal, very good things for a pooch to learn- I put the leash between my knees when Dexter is particularly enthusiastic. He gets a tiny biscuit when he sits and stays between my knees , I have to be quick, though.Olga looks like a pleaser- she may be easier to train than most! Besides she is gorgeous and I LOVE her!

Olga will discern soon enough that she's landed in heaven. Love these getting to know you stories.

Be careful about what she scarfs up from the sidewalk. Even gum can be dangerous since all this "diet" gum has an enzyme that is fatal to dogs if ingested. Try pulling her head up and giving her a pop with the leash, accompanied by a firm "no". If you think she's not ready for this, just try to watch her and get her head up. ER vet bills are not fun. Trust me! ;)