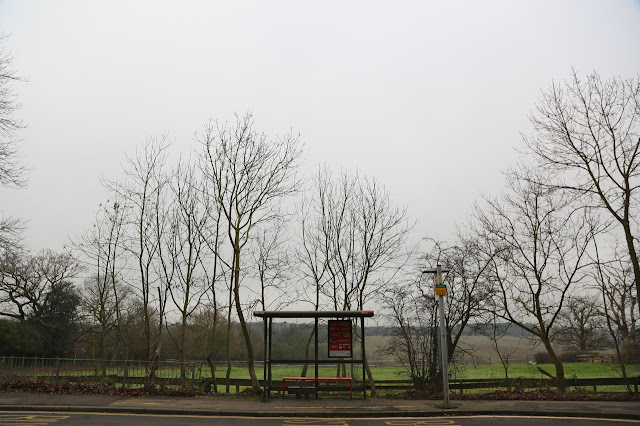 Yesterday I took a train up to far northeast London, to a place called -- appropriately -- Freezy Water. Isn't that a great name?

Some time ago I was poking around on Google Maps when I came across Freezy Water. When I went to StreetView, I found this image of what looked like a great little cafe: 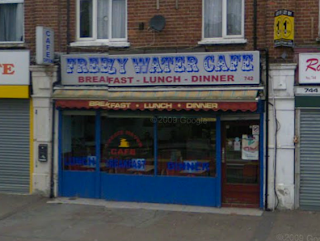 I decided I had to find and photograph that cafe for my burgeoning collection of storefront photos.

The web site Hidden London calls Freezy Water "a lacklustre residential locality," and indeed people seem to have trouble deciding even how to spell it -- sometimes it's one word, sometimes two. It was apparently named for a local pond that froze quickly in the winter, perhaps due to its depth or exposure. 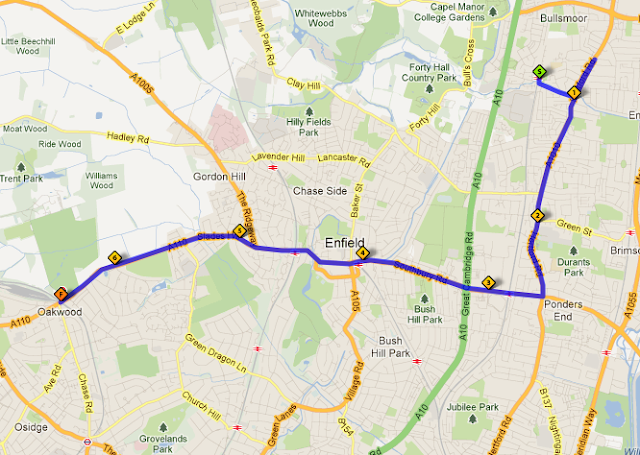 I took the train up from Liverpool Street, disembarked at Turkey Street and walked north. I realized with sadness that the cafe in the Google Maps photo is now gone. (Apparently the photo is from 2008.) In its place is another restaurant more appropriate to a lacklustre residential locality. I looked around for other businesses bearing the Freezy Water name, but didn't find anything quite as interesting. Sigh.

I decided to head south along Hertford Road, which had lots of other shops and a few interesting sights. For example, there was this mural: 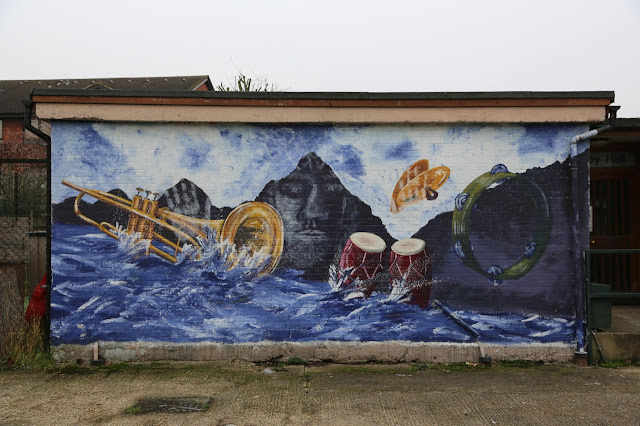 Jesus! With musical instruments! In the ocean!

I have no idea what it means, either.

I turned west and walked through Enfield Town, where I got a few interesting shots. 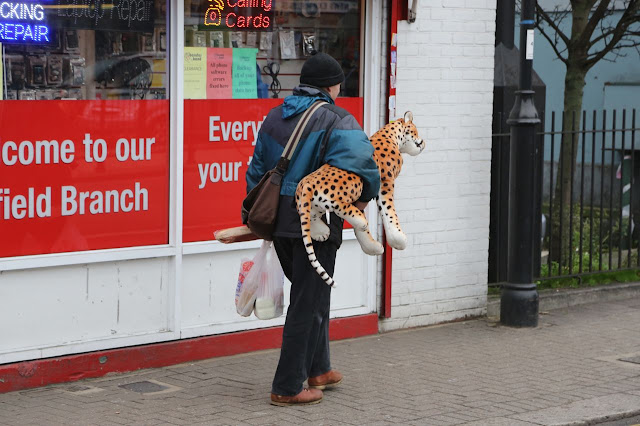 This man went to the store for milk and a giant, stuffed leopard. Makes perfect sense.

Anyway, I continued westward along the road to Cockfosters, which you may remember I visited last year at about this time. The road west of Enfield gets hilly and traverses empty farmland -- that's where I took the bus stop photo at the top. Something about that bus stop out in the middle of nowhere was amusing to me. But just before I took the picture, which makes it look so empty and deserted, a bus stopped and let off three people. Go figure.

My feet were killing me by the time I got on the tube. But overall, and despite the cafe photo bust, it was a good day of exploring!
Posted by Steve Reed at 6:40 AM

I laughed out loud that the town was called, officially, "lacklustre!" That's so sad. :)

I'm working on a Walking Bingo game - you get points depending on what you see. So a single abandoned shopping trolley would be worth 5 points because seeing just one is so rare these days, but for each additional one you have to deduct a point

I'm not sure how many points "man with inflatable leopard" would score, but it would be high

Elizabeth: The name alone elevates it above lacklustre, I think.

Pixies: Not inflatable -- stuffed, as in a plush toy. I think an inflatable leopard might actually be worth more points. :)

I do believe that if we were to be honest, the little community where I live would be labeled lacklustre as well. And yet...like your Freezy Water, we have some shine here. You just have to look. As you did on your lovely walk.
I love visiting you, Steve. I'm so glad I can.

The thing so remarkable about you and where you live is that you can cover so much interesting ground in a day. WITHOUT driving miles to get there. Your walks are wonderful- Always an adventure! 6 miles is quite a hike!

the guy with the leopard made it all worth it.

I agree with Ellen. But the Jesus Waterlogged Mystery Band is pretty cool too :)

Freezy Water ... love it! How long ago did they name it? Any ideas?

Did you go in to the store to see why they might be selling stuffed leopards and what other odd things they might have? Milk and leopards? Very odd indeed. Very cool. Makes my walks in the woods look very tame.

I don't know why, but when I saw the guy with the cat, I thought about Mrs. Slocombe and her pussy; I'm crackin' up over here.

Ms Moon: There's a bit of shine everywhere -- I really believe that. You just have to be alert enough to see it. (Not that I always am.)

Linda Sue: Yeah, the urban experience DOES condense all the interesting sights!

Ellen: For me too! I took other photos of him from the front, and he saw me taking them and laughed -- but I liked this one from behind the best.

Lynne: From what I read, the name dates from the 1700s when there was a farm in the area. As for the leopard, I'm not sure which store it came from!

Nancy: Thanks SO much for that video clip. I laughed so hard! I love that show.