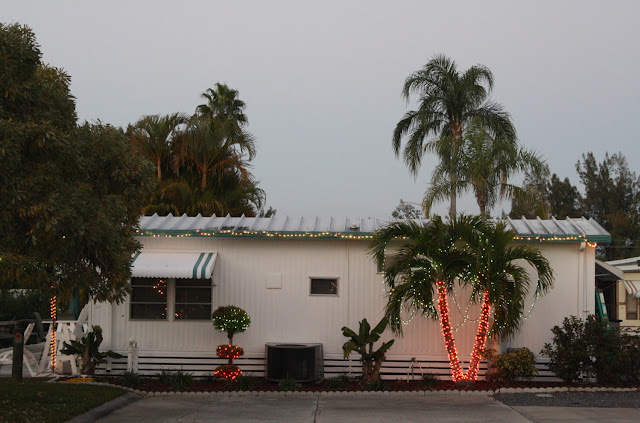 I finally finished "Vanity Fair" this morning, after rocketing through the last 150 pages in 24 hours. Whew! I enjoyed it, massive as it was. It ended exactly as I had hoped it would, and I won't give it away, in case you read it.

I'm back at Starbucks this morning, still contending with the consequences of the Internet outage at Dave's parents' house. I hope they aren't offended that I keep leaving home for the long walk to the local cafe. I'm trying to participate in family life and be a good guest, I really am. I even watched football yesterday, for God's sake! But I have to get some exercise every day, and I have to have some Internet time.

Yesterday was pretty low-key. In addition to the aforementioned football, we watched the Rose Bowl parade, and I walked over the bridge from Cortez to Bradenton Beach. I didn't actually dip my toes in the Gulf, but I enjoyed walking around the quaint beach town with its colorful shops and houses.

I'd forgotten how overtly friendly people are in this part of Florida. I pass complete strangers on the sidewalk and they say "Good morning!" That just freaks me out a little, big-city boy that I have become. (I do respond, though.) It's mostly the older folks -- the younger ones are all ill-mannered like me.

Dave and I walked out to the waterfront at dusk last night and watched scores of fish leaping singly or in distant pairs from Sarasota Bay. (Mullet, I think?) They must have been eating the same mosquitoes that were devouring us. It's great to see so much nature in the midst of all this development, but I'm mindful that its survival is always precarious.

Speaking of which, walking in Florida is an adventure. The state transportation department likes to create wide, barren, straight highways with intersections that span what seems like acres of sun-bleached asphalt. There may be crosswalks, but the walking environment is nonetheless not the best, with all that traffic whooshing past. (Don't get my brother, a city planner and bicycling enthusiast, started on this topic -- one of his pet peeves!)

(Photo: Christmas decorations in Cortez, at dusk.)
Posted by Steve Reed at 2:09 PM

1. I love that picture. Perfectly Florida.
2. They're not sure exactly why mullet jump but yes, they sure do it a lot.
3. Mullet are delicious if you eat them the same day you catch them.
4. Florida is not set up for walking. You are right about that.
5. Your brother looks like an interesting character.
6. A question: Are you homesick for London yet?

seems to me you already made the ultimate sacrifice...football fer cryin' out loud!

people are very friendly here too. my son and dil moved to portland last year but although they liked the urban lifestyle, they couldn't get work (and it is expensive to live there) but the main thing was they couldn't get over how unfriendly people were. nice, but unfriendly. after four months they gave it up and moved back to Texas.

One of Mike's best friends from grad school was from Bradenton (well, he was FROM Indiana, but had lived a long time in Bradenton too). Super nice guy - and older like we are. Ha!

This photo definitely says Florida to me as I remember so many mobile home courts. I do like palm tree trunks strung with lights, I have to say.

The picture is awesome!

And I love the phrase "ill mannered." You aren't, of course.

You watched football? Wow. I salute you.

Ms. Moon: My brother IS an interesting character. And I suppose I am a little homesick for London, but mostly because I want to get back to normalcy and stop living out of a suitcase. Traveling under any circumstances, as much as I love it, is trying on some level.

Ellen: I'm surprised Portlanders were unfriendly. I always thought that would be a very friendly town. Maybe they feel somewhat invaded. I know they don't like Californians!

Bug: Bradenton/Sarasota is a nice area. I lived down here for six years before moving to New York.

Reya: I have my ill-mannered moments, just like everyone else. :)