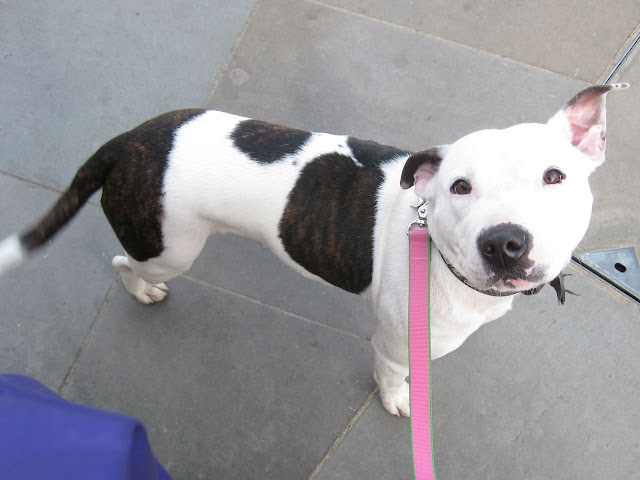 Here's the new addition to our household! Isn't she adorable? She's a Staffordshire Terrier, or "Staffy," and the people at the dog shelter named her Tinsel. (Apparently she was a stray picked up around Christmas time.) I thought that name was sort of cute, but Dave vetoed it out of hand, and the dog doesn't really know her name yet. So we're still trying to figure out what to name her.

I proposed Lola, Flora and Polly. Dave suggested Brenda, which I went for immediately, but then he backtracked and said he was joking.

While we were lying with her in the living room last night, she was making all sorts of funny, soft, satisfied sounds. She'd been fed and walked and was lying in front of the fireplace, and was basically moaning with happiness. So I suggested Mona. That's where we're leaning at the moment. 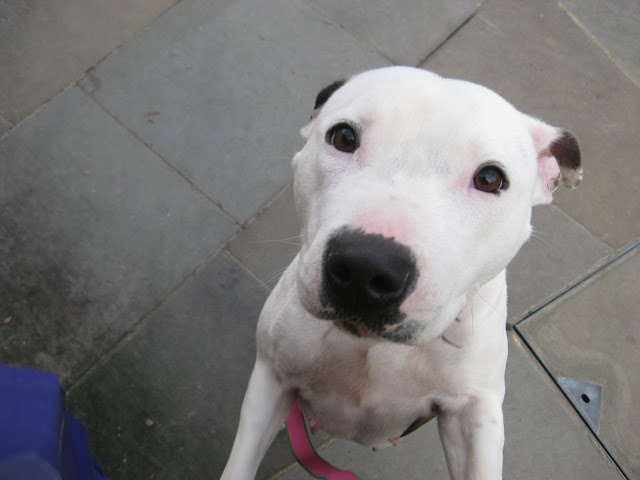 We're adopting her through All Dogs Matter, and I had to go to a shelter in Tower Hamlets, which is in East London, to pick her up yesterday afternoon. I took the tube to Mile End and walked to the shelter, which was basically a small kennel housed in a commercial arch underneath some railroad tracks. She'd already been fed and walked that morning, but she was still very excited to emerge from her cage, and I ran her up and down the parking lot a few times to work off some energy.

I wasn't looking forward to paying a taxi to drive me and the dog all the way back across London. Fortunately, I ran into a volunteer at the organization named Sharon who was transporting another dog to Camden. So Sharon invited us to ride along that far.

When we got to Camden I got out and walked toward King's Cross, and Tinsel/Mona took the opportunity to make a deposit on the sidewalk. Fortunately I had a plastic bag, but as is true in much of London there were no trash cans nearby. So I stuck the now-full plastic bag back in my larger paper tote bag full of dog-related items (treats, leash, etc.), intending to throw it away as soon as possible.

Only after I'd hailed a cab and climbed in did I realize I was still carrying that plastic bag. The cab began to smell not so great. I hoped the driver, up front behind a plastic divider, couldn't smell it. If he did, he didn't say anything -- in fact we had a nice chat about the fact that I'd just adopted this new dog.

Ah, the life of a dog owner. 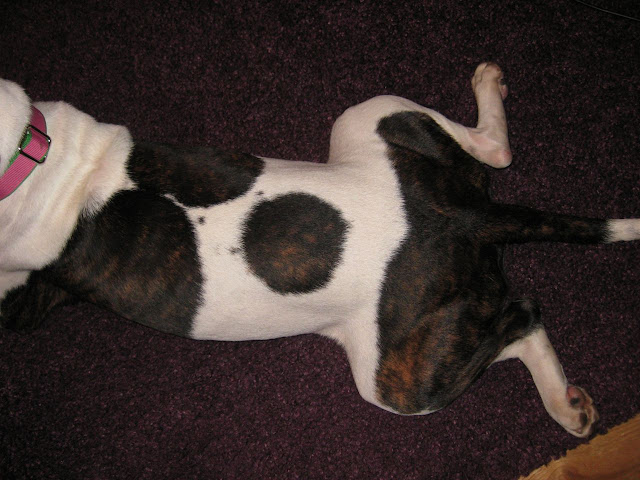 When I got Tinsel/Mona home, we had a long, high-speed walk around the neighborhood. She walks fast. She's very enthusiastic on a leash!

The markings on her back are great, aren't they? With those two wing shapes across her shoulders and that one central spot, she reminds me of some kind of butterfly. (I jokingly suggested Farfalle and Papillon as names; Dave replied, "You're drunk." I had had one glass of wine, but I most certainly was not drunk.)

You may be thinking, "That dog it a pit bull!" A Staffordshire Terrier is not the same as a pit bull, although they do look somewhat similar and I believe they're related. The British Dangerous Dogs Act specifically prohibits pit bulls, but Staffies are very common in England and are one of the country's most popular breeds. We've seen no indication of aggression or temperamental behavior in Tinsel/Mona -- in fact, she's been sweet all around.

Technically, we're still foster parents. Assuming all goes well, we'll finalize the adoption in a week or two.
Posted by Steve Reed at 7:03 AM