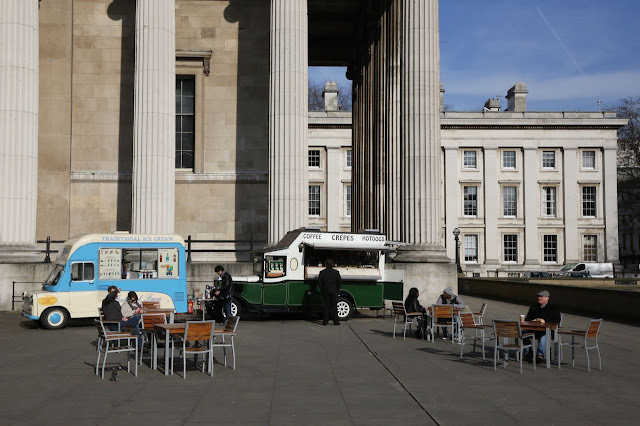 Yesterday I went to the British Museum to see their show of Ice Age Art. Even before I went I was marveling at the age of the pieces I was about to see. In America, we think of a 200-year old church as old. Christianity itself is just over 2,000 years old. But these pieces are tens of thousands of years old. Mind-boggling!

Some of the pieces were what you'd expect -- bulbous female fertility figures. But actually, there were all kinds of human images, some bulbous and obviously pregnant, and some not. The experts apparently don't know what all of them were for. I like to think they were images of ancestors or maybe even family members. Maybe they were the Ice Age version of carrying a photo of your family in your wallet.

There was an astonishing figure of a man with the head of a lion, carved from a mammoth tusk -- 40,000 years old! Again, his purpose is unknown, but perhaps linked to shamanism. Later pieces in the show were 20,000 years old, and it was staggering to think they're only half as old as Lion Man.

Did you ever read the "Clan of the Cave Bear" books by Jean M. Auel? I couldn't look at these objects, the tiny, painstakingly carved statues of animal species long extinct, without thinking of those books. In fact, miniature cave bears were among the pieces on display! 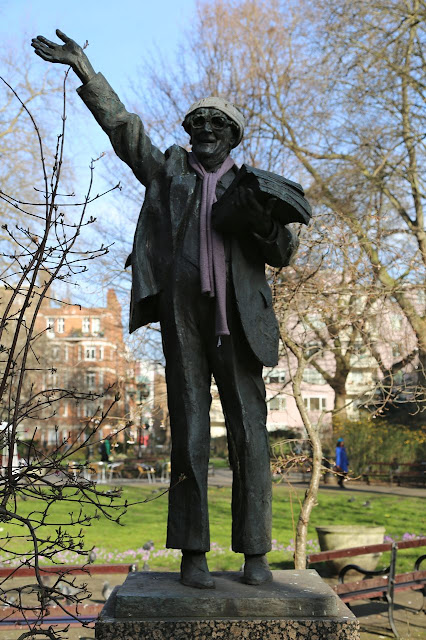 After the show I walked to Red Lion Square, which is a few blocks away from the museum. This statue stands in the park -- it's a guy named Fenner Brockway, a longtime pacifist and campaigner for civil rights who looks like he was probably quite a character. (The hat and scarf make him look a bit like Quentin Crisp, but they are obviously later additions.)

I went to Red Lion Square specifically to have a coffee in the cafe that stands in the center of the park. I stopped there months ago and had a coffee, and after I walked away I realized I hadn't paid for it. I've felt guilty about it ever since. So this time I paid for two coffees and evened the score. 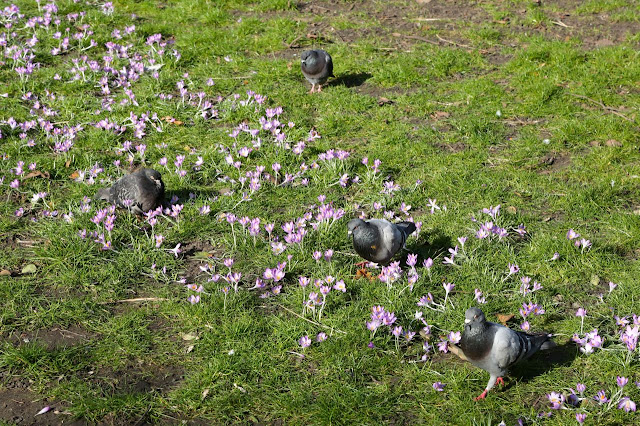 The crocuses were blooming in a band around the park's hardscrabble lawn. For some reason the pigeons seemed to love them. I guess they're just as happy to see the arrival of spring as the rest of us -- and living outdoors, why shouldn't they be?

(Top photo: Food carts outside the British Museum.)
Posted by Steve Reed at 6:15 AM