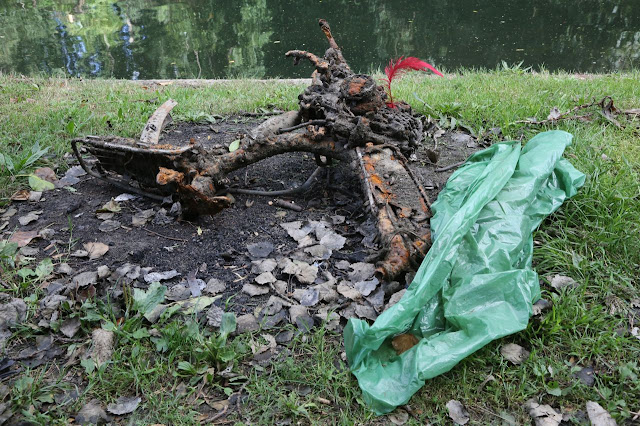 Olga and I wandered down to the canal yesterday for a long, off-leash outing. She ran around and sniffed things and chased geese and played endlessly with a plastic yogurt cup that she found. (My cats used to do that, too -- make toys out of trash, when I'd supplied them with enough cat toys to keep them happy for all nine lifetimes. Further proof that pet toys really are more for the owners.)

We found the once-submerged remains of a moped (I think?) on the canal bank, covered with mussels and adorned with a peculiar and oddly ceremonial red feather. 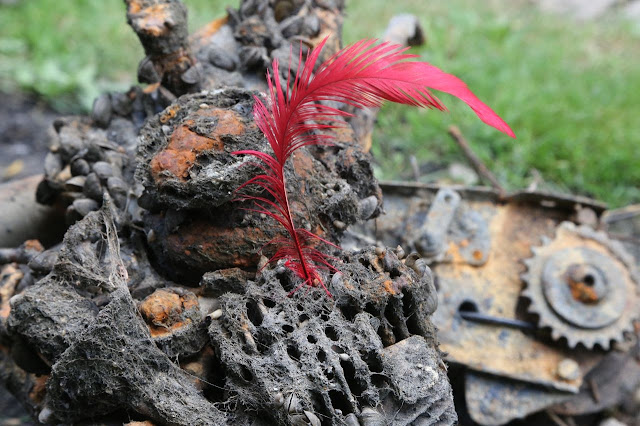 The canal banks have been mowed, so the long grasses and weeds that Olga romped through earlier in the season are now gone. (Bad news for the canalside caterpillar.) We're easing into autumn -- the green leaves are browning and crisping, spiny seed pods are maturing. Temperatures dropped into the 40s last night and it's 52º F right now. It feels great.

We watched "Risky Business" and "Juno" yesterday afternoon -- a teen angst double feature!
Posted by Steve Reed at 7:26 AM

Watching movies like that confirms for me that being a teenager is hell. Or - it can be.

The pictures are beautiful! All that texture - wow. When I see things like this, I realize that all traces of our civilization will disappear overnight in terms of earth time. I find that comforting somehow.

Jake's favorite toy was an old sock, stuffed with dog treats. He tore them to shreds and ate the "innards." I got rid of a lot of old socks with holes that way. Again confirming that pet toys are for the owners.

Already cold! Personally, I need more warm months than cold ones. Would love to know how or why that feather was placed there.

That feather thing is something I would do - if I saw the feather I would pick it up & then decide "here's a likely spot to leave it!" Ha.