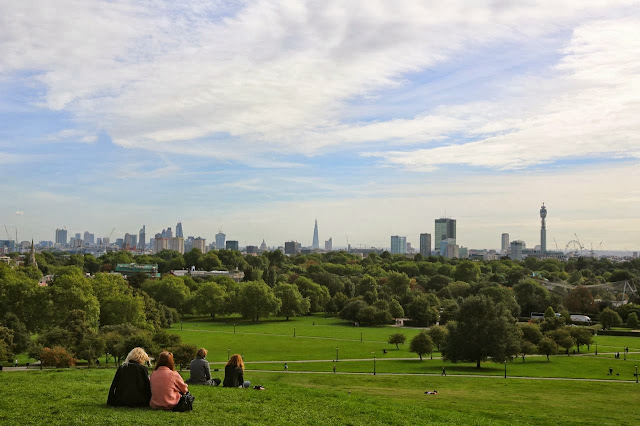 This was my view during lunch yesterday. I left school and walked to the top of Primrose Hill, which is nearby. There's a little cluster of benches surrounded by a sloping grassy lawn at the hilltop, where I ate my hummus sandwich and admired the view of london. (Unfortunately they'd just fertilized the area, so my idyllic outing was accompanied by the strong scent of manure!)

I finally got around to buying Jim & Karla Murray's new photo book, "New York Nights." I loved their earlier book about New York storefronts, and this is in much the same vein -- except all the shots are taken at night, which shows off the neon signs and colorful windows and lighting. (I'm sure you don't remember, but I had the privilege of taking Jim and Karla on a photo walk through my London neighborhood in April 2012!) My favorite shot from the book is one of the Lyric Diner, which was near my apartment. Jim and Karla somehow managed to skillfully eliminate the lamppost and traffic light that partially block a clear view of the corner. Unfortunately their photo isn't online, but here are some samples of some other shots from New York Nights.

I'll spare you the story of how the Royal Mail bungled the delivery of the book to my door, forcing me instead to go to the post office before work on Tuesday to pick it up. I paid extra for Saturday delivery, people! But no, never mind, I am not going there.

I've been thinking about the problem of the unread books in our library, and yesterday I suggested some ways to display them more prominently. The other librarians agreed, so I'm going to work on that next. Maybe I can get some of those "lonely books" circulated a little more often!
Posted by Steve Reed at 7:03 AM

I was going to suggest maybe a little table for the lonely and forlorn un-checked out books somewhere where they can be seen by everybody passing by. I'm certain there are hidden gems there. I'm so glad you are going to save them.

Sometime when I don't know what I want I start with the A's and make my way through the aisles picking out books with titles that intrigue me. I've found some great reads that way. I am a library rat! :)

"Lunch On Primrose Hill" sounds like the title of a poem.
Now I sort of want a humus sandwich.

Hey I'm going to have hummus for lunch - with pita chips & a salad :)

That is a gorgeous view - I think I'd eat there every day (weather & manure permitting).

You're so good about the book!

We went to a diner around the corner from your apartment when I was in NY. Was it the Lyric?

What a view! Wow.

Nice to have a place like that so close by that you can use it.