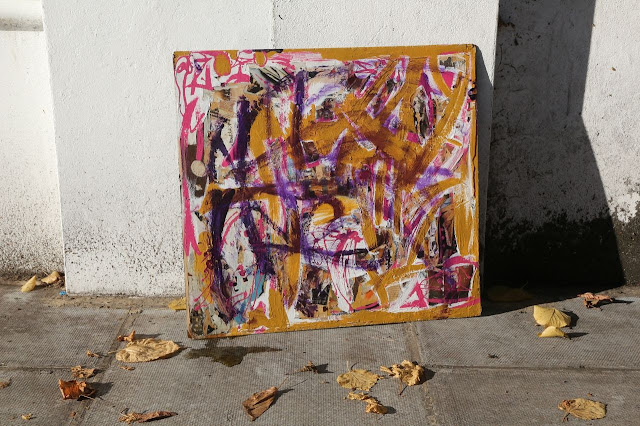 Once again, I bring you modern art from our street. This isn't as nice as the last painting I found. I wasn't even remotely compelled to rescue it -- especially since it had already been baptized with dog urine.

I found it yesterday morning as I set out on a photo walk through Chelsea. I took the bus down to an area near Earl's Court and walked south through Fulham and east along King's Road, to Sloane Square. 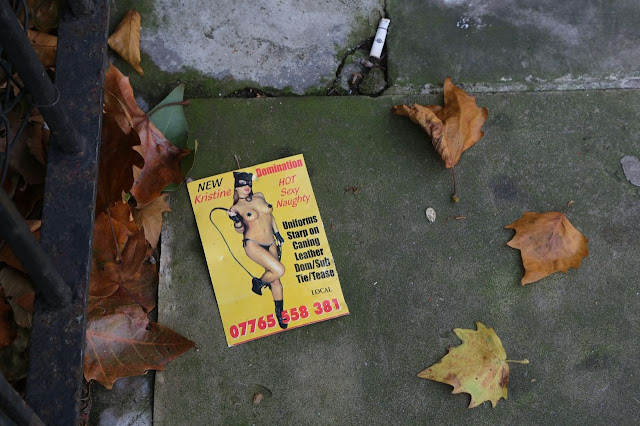 I got some really good shots, I think -- and I also got these silly ones.

There's a phenomenon in London whereby the insides of those iconic red telephone booths are perpetually plastered with fliers from prostitutes. How this is legal, I am not sure. They inevitably wind up on the ground outside the booth, where they make for entertaining reading. (Dave insisted that I post this picture -- he and I both got a good laugh from "starp on.") 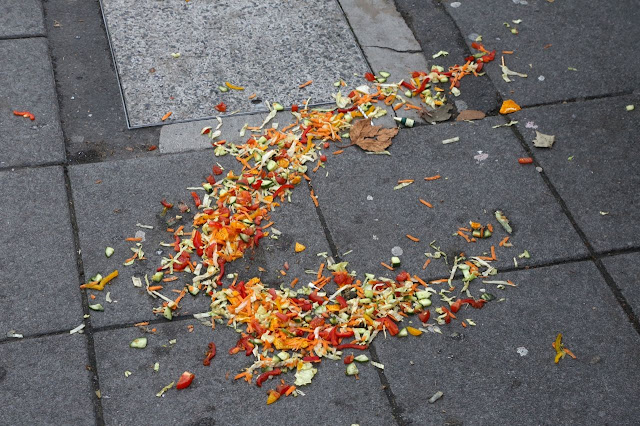 Also on the sidewalk -- a cheerful crescent of taco salad!

I took the bus home from Sloane Square, and it was the longest, slowest bus ride I have ever taken in London. Something jammed up the traffic and we sat motionless for at least 20 minutes on Sloane Street. I just read my New Yorker, which is what I'd have been doing at home, anyway.

Dave and I went to see "The Way, Way Back" yesterday afternoon. I was prepared to love it, but I was disappointed. The cast was terrific (Toni Collette! Allison Janney! Steve Carrell!) but the characters didn't feel very fleshed out, they did things that made no sense, and ultimately it was all very predictable. Dave liked it, though, so maybe I'm just too critical for my own good.
Posted by Steve Reed at 7:06 AM

A lot of yellow/gold in those photos (including the dog pee). Perhaps it's a sign that I should heal my yellow chakra today.

That was my first thought...I liked the other one better! My niece and I just saw the butler yesterday....I thought it was really good. And she mentioned I should see way way way back...she loved it so I will see. Lots of good movies coming out...

haven't been to a movie since the last visit from the last grandkid. although I watched a movie with Matt Damon last night. Don't remember what the name of it was but it was about three peole who were touched by death and they are eventually drawn to each other. he was a psychic who considered it a curse, a little boy whose twin was killed, and a woman who drowned and was revived. I enjoyed it.

Ah, so even sex workers suffer from dyslexia. Or maybe the person who printed her business cards wasn't a completely satisfied customer.

I was so confused by "starp" - I wondered if I just didn't know the lingo. Ha!

That is the most cheerful taco salad I've ever seen. Cheers!

I agree with you about The Way, Way Back and was disappointed as well. I thought it got better as it went on, but for the most part, not so great --

If you have the chance, go see "Afternoon Delight."

I think the dog had the right idea regarding the paitning!