The Un-Joni Appears in a Dream 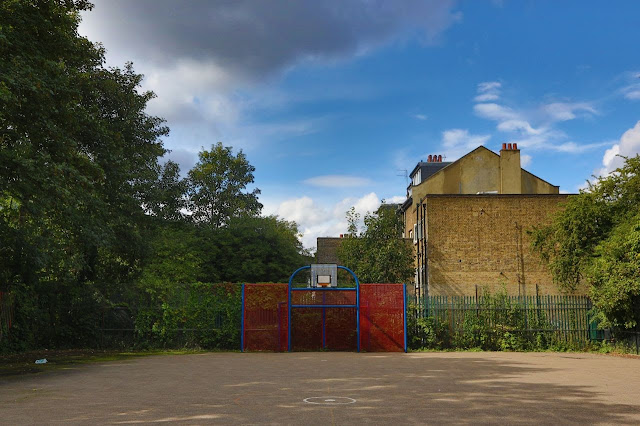 I had the strangest dream last night, and not about books this time.

I dreamed that I took Dave to South London to see a Joni Mitchell concert. We got to a dark little nightclub with candles and vases of lavender on the tables, and we ordered dinner. The crowd was standing room only -- and after I'd eaten I realized Dave had moved across the room, so I got up from my table and went to join him. Two people immediately grabbed our table seats, one of whom I overheard being addressed as "Ambassador." Before joining Dave, I decided to go buy a Joni Mitchell CD at a shop across the street. So I climbed some stairs out of the club and tried to cross the street, but in order to do so, I had to pass through the courtyard of a Tibetan Buddhist temple, and a guy sitting by the entrance told me I couldn't come in. Instead I had to follow more steps to go around. These steps were bright with ceramic tile and I slid crazily up and down them, forgetting the shop entirely. I decided I'd better stop playing on the stairs and just go back to the club before I missed the show.

When I got back, though, the crowd was down to three people -- one of whom was Dave -- and the Joni performer wasn't Joni at all, but a really bad drag queen singing Joni Mitchell songs in a kind of slapstick style. She looked like a long-haired Marge Simpson, with prominent, Simpsons-esque teeth. Everyone looked bored. The only audience sound came from a piped-in laugh track. I looked at Dave and thought, "Well, he'll never go anywhere with me again."

(Photo: A basketball court between Kilburn and West Hampstead. This is an enhanced HDR photo, which is why the colors are so intense.)
Posted by Steve Reed at 7:09 AM

What a horrible dream.But so very colorful!

Ha! That is a crazy dream.

One interesting dream technique is to add the phrase "part of me" after every noun, and "ego part of me" whenever you refer to yourself.

Cool dreams lately! You didn't used to be able to remember them, right? They're so creative!

I love this dream! You're heading into my dream territory there :)

I think the dream is lovely... and sad, and haunting, and mystical. I hope you're keeping up with these dreams. I always keep up with mine so I can see what it is I'm trying to tell myself.

what a hoot! so full of symbolism.

HAHAHHAAA What a GREAT dream, followed you all the way...and then there is the confusion. Dreams usually leave one with confusion. Well, dreamed, you!

Ms Moon: I actually thought it was pretty humorous!

Reya: It's definitely unusual that I remembered this one. I am not surprised that I have a Joni Mitchell drag queen part of myself.

Nancy: The Tibetan Buddhist temple was the mystical part. I am still not sure what THAT was all about. I usually don't keep up with dreams at all -- I rarely remember them, as Reya said.

Linda Sue: There certainly was confusion!