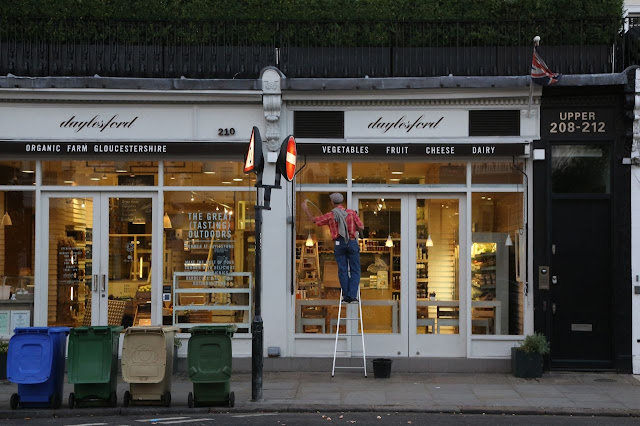 We had a minor domestic disaster last night. Dave made spaghetti sauce with artichoke hearts and capers, and as has lately become our routine, we talked about our day and then watched Rachel Maddow and an episode of "Green Acres" as he cooked.

When we finally sat down to our pasta at about 7 p.m., Dave took one bite and said, "What is so hot in this?"

I eventually pinpointed the peppery taste -- all the little round green kernels that looked like capers. Dave ran to get the jar, and sure enough, they weren't capers at all. They were green peppercorns in brine. We were eating spaghetti sauce containing an entire jar of green peppercorns.

There's a show here in England called "The Great British Bake-Off," in which contestants compete against each other in various feats of baking. As has become standard on these shows, one contestant gets sent packing in every episode. Well, the other day, one of the bakers accidentally used salt instead of sugar in his recipe, and I remember thinking that was an awfully careless mistake. But now I see how easily such a thing can happen. Those peppercorns really did look like capers.

Anyway, I picked the peppercorns out and ate the sauce, and it was fine. Dave ate his peppercorns and all, but complained this morning that he didn't get the best night's sleep. (Also partly due to bed-hogging Olga.)

After dinner we watched an episode of "24," and although we're not quite finished with the first season, Dave and I agreed that we've had enough of that show. It's just too ridiculous. I mean, I can barely keep myself awake through an average workday, and here's a guy whose wife and daughter have been kidnapped (twice in the case of the daughter), who's trying to prevent a political assassination, who's surrounded by murder and mayhem and gunfire at every turn, and who's been awake for 36 hours and isn't even visibly tired?

(Photo: The window washer that Olga and I see most mornings in Westbourne Grove. He always gives her a pat on the head.)
Posted by Steve Reed at 7:10 AM

Hahahahaha! I am still laughing! We have done this very same thing before: mistaken those little green peppercorns in our pantry for capers! They do look alike! Once you make that mistake I can tell you that you check the label very carefully in the future. I always double check.

P.S. That song always reminds me of "The Full Monty" and I can see them practicing their routine in a queue or wherever they were around town. I've got to watch that movie again ...

I want to shop at that little store. It looks delightful! And I love the picture. The way the garbage and recycle cans are lined up so tidily in front of it. Just nice.
Green peppercorns instead of capers. Lord. I bet it was spicy.
I've never done that one but I can definitely see how easy it would be to do.

It would have flat out killed me. we always grow jalapenos and Marc stuffs them with cream cheese, wraps them with bacon and broils them. so good except every now and then I'll bite into one so hot that I cough and sneeze and my vocal cords freeze up and my mouth is burning so badly I think I'm going to die right there on the spot. death by jalapeno.

That's hilarious - but even funnier that Dave ate the whole thing. Ha! It would surely have cleaned out my sinuses.

I love the Full Monty. My dad took my stepmother and me to a local playhouse production and boy was THAT eye-opening to them. Ha! I don't think they knew what it was about.

Murder in the kitchen! Could be a book of disasters. My father in law used to make pumpkin pies with the egg shells thrown in -"for calcium". He lived to be 99.75 years old, he may have been on to something- he also lived on watermelon and grapes for a year- got tired of pie with grit, I am assuming.
Never watched 24, too intense.

My sister once thought a clove of garlic was the whole head -- you can imagine the salad dressing's taste.