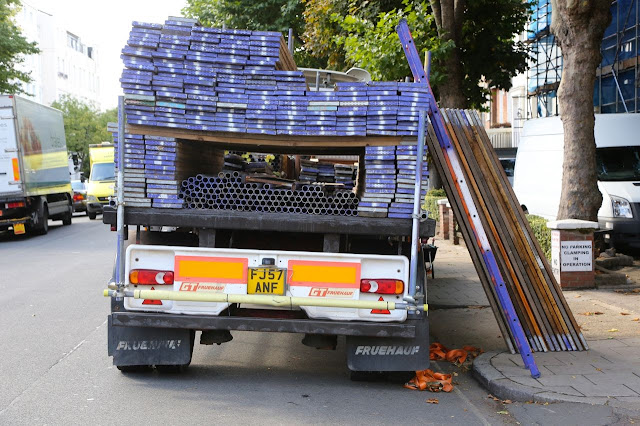 Sausage-palooza turned out to be an eminently survivable affair. The kitchen was not a disaster, and Dave was mildly offended that I suggested it would be -- but believe me, extensive cleanup is sometimes required after he cooks an elaborate meal, so I'm not crazy in thinking that might be the case.

Anyway, we each had a sliver of the sausage, and I must say it was very good, with pistachios and garlic and other flavors. Kudos to Dave for figuring that out.

We have not yet eaten his chicken liver paté, which involved layering veal, ham and marinated chicken livers (and maybe some other meat that I'm forgetting?) and wrapping the whole thing in caul fat, which I'd rather not explain, but feel free to click on the link.

And as a special reward for my photographic documentation of sausage-palooza, for dinner last night, Dave made bacon-cured pork chops.

Hmmm. My talk of vegetables is clearly just so much shouting into the wind. I just have to remember that to Dave, meat equals heaven, and in a very American way it is the center of the meal. Even his more vegetable-y meals tend to have a modest proportion of vegetables on the plate, whereas I used to empty all the vegetable dishes when I was growing up. We're just wired differently that way.

Besides, I can't be bitchy about this. He is cooking for me, which is pretty terrific, and he occasionally makes something like curry or tuna steak on salad greens that is clearly geared toward my tastes. He also has his own private, physiological reasons for not wanting to load up on veggies. So this is how marriage works. We accommodate each other.

In other news, while walking Olga this morning, I found a big box of paperback books that had been set out for recycling. The top of the stack was Evelyn Waugh's "Vile Bodies," which I've never read, and I figured a box that included Evelyn Waugh couldn't be all bad. So I brought the box home and dug through it, and retrieved a stack of worthwhile reading material. I rejected some others, like "Fifty Shades of Grey" and one of the "Twilight" books. Life is too short for those. Off to the thrift shop they go.

We have been unable to watch Rachel Maddow for the last couple nights. Something is wrong with the  web site, I think -- or maybe it's our Internet connection. I get page errors when I try to load the page and play the video. We tried it on two different computers with the same results. How can I live without partisan liberal reinforcement?!

(Photo: A truck loaded with color-coded scaffolding in St. John's Wood.)
Posted by Steve Reed at 7:42 AM

I have recently begun declaring that I do not like vegetables but that's not entirely true. I am just old enough to say stuff like that and no one bothers to try and convince me otherwise which is somewhat liberating.
Yes. That is marriage. Give and take. Offer and receive.
Good morning from Lloyd.

Yep, that's how a marriage works.

Rachel was fun last night- The best thing of the day was "blatant cheating at sports" and passion to win...that sort of OMFG funny stuff that humans do. Otherwise pretty much the same- republicans are insane, Jeb Bush ( yes, he may run) is in bed with the loonies and so it goes...

I'm glad it wasn't as bad in the kitchen as you expected. It would be nerve wracking for me, too.

Dave is so talented. But still, I wouldn't want to be in charge of clean up.

Yum, chicken liver pate! Rick has made it before but it makes so much that we can't possibly eat it all and none of the people we know want any. Too bad.

Sausage making is indeed a messy event and very brave. Kudos to Dave!

Meanwhile I can look forward to my hotel-delivered-pizza from Domino's as dinner tonight on the trek west. Not very exciting.