Figs, Jesus and Getting Older 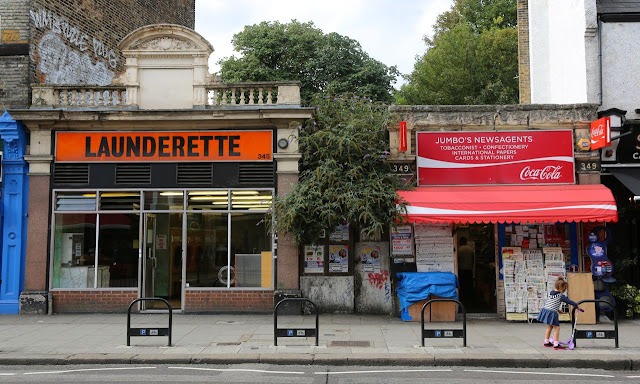 I took my photo walk yesterday -- I went north from our neighborhood through Maida Vale and east into Kilburn and West Hampstead. I got some OK shots, like the one above, but nothing that put me over the moon. My heart wasn't much in it, to be honest. Who knows why? Maybe I was just tired from the workweek and taking Olga out the day before.

I stopped by a sad car-boot sale (like a flea market or rummage sale) where I bought nothing, and by a farmer's market where I bought five fat purple figs, which I then had to carry in an awkward paper bag for the rest of my walk. I could have eaten them, I suppose, but I wanted to wash them first. After a couple of hours I got on the bus and came home.

I spent the afternoon reading about Jesus and the period in which he lived. I wouldn't say we live in a peaceful time, exactly -- what with Syria and all that -- but at least most of us enjoy a degree of personal safety and security on a day to day basis. We have no reason to believe that soldiers might barge in and massacre us all, which happened regularly in Jesus' time. It was a dangerous world of punishing taxes and population shifts in which no one, it seems, had the opportunity to live very long. Who wouldn't want a change, the promise of a new era, a messiah? Jesus' rise to power makes perfect sense.


I've been having weird dreams lately. Last night I dreamed about my great aunt and uncle, except that they weren't the same people as my great aunt and uncle in real life. In the dream I was young, and my great uncle gave me a very valuable contact for a job. In real life, this never happened. (He did, however, give me $50 when I graduated from high school.)

This was after I woke up early Sunday morning, about 3 a.m., to the shocking realization that in three years I will be 50. FIFTY -- a half-century! How did that happen? It was a dreadful feeling, honestly. I'd like to laugh it off, and I have never been one to be obsessed with aging, but my god. I suddenly felt the weight of all the years that were already gone, and how very long ago so many things happened. It was scary, in the way that thoughts that come unbidden in the middle of the night often are. In the daylight it's less scary, but I'm still not thrilled about it.

My bad-tape was running all night. The one that tells me all the ways in which I have failed, all the bad choices I have made.
I am exhausted today.
I know exactly what you mean.

Today is my birthday and sadly I passed the 50 mark a few very swift years ago. I know exactly how you feel. I watched a PBS show last night called "The Last Tango in Halifax" and I spent the rest of the evening contemplating many "what if" scenarios. Thank goodness I fell asleep after that.

I turn 50 in MARCH & I feel the same way. All that stuff I was going to do suddenly is either more urgent or I've decided not to care about it.

I wasn't to happy about turning 50 either but the 50s turned out to be a pretty good decade. Turning 60 was far worse. I'm 63 now and I'm really just now getting used to it.

HA...wish i were turning 50..next May i will be 68!! really it is just a number, i work full time, no serious health problems, so it is really a wonderful life.
throw yourself a big party!!

The very end of the decade of the 40s is a bitch, but when you turn 50, everything eases up. It's such a relief.

60 is even bigger but I'm getting into it now. Life is precious at every age, it surely is. Love to you, friend, lots of love.

And yeah about Jesus, hell yeah. You know my mantra these days: It could be worse. This could be first century Jerusalem.

Steve, I passed 50 quite a few years ago without a hitch. Bigger than turning 50 as a slap in the face about my own mortality, was losing my parents; first one and then seven years later the other. It really hit home then. I guess I still haven't gotten over it.