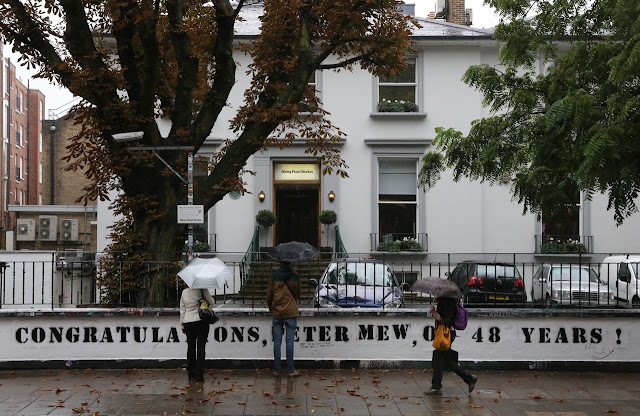 I took my camera to work yesterday, thinking I'd get out at lunchtime and do some photography. The weather, however, had other ideas. I wound up walking the short distance to Abbey Road Studios, the recording studio that everyone on the planet will forever associate with The Beatles, but that's as far as I got. The sign on the wall in front is for one of their sound engineers, who has obviously been there a while. (Longer than I've been alive, actually, which puts yesterday's fears about aging into perspective!) 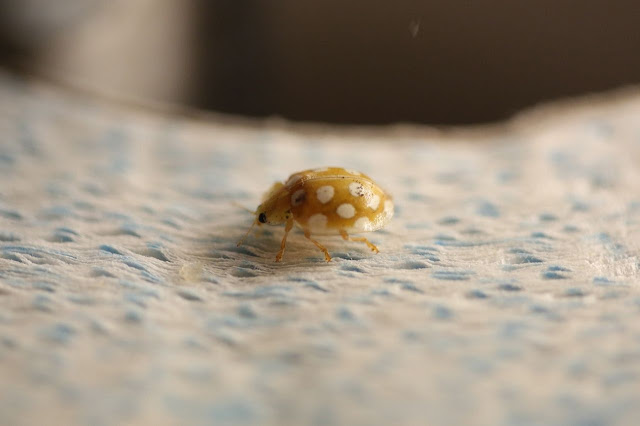 Last night, Dave was cooking dinner when he spied this "blond ladybug" (as he called it) on our paper towels. It only perched there a few minutes before flying away, and this morning I spotted it on the kitchen ceiling near the window. I think it's just an immature one that will eventually get red, but what do I know?

Finally, remember the potted boxwoods from our balcony that we put outside near the front door of our apartment building? They have mysteriously vanished. I hope someone took them for their own balcony redecorating project.
Posted by Steve Reed at 6:39 AM

Approaching 50 is difficult. It's OK to think about it perhaps a bit more than you prefer. It seems normal to me.

Did you catch the link to the Beatles singing Abbey Road songs without musical accompaniment? It was/is very powerful. I wore out that album, listened to it so many times!! That and a James Brown album. I literally wore them out.

Can you imagine working somewhere for 48 years? Although I've been at my current job the longest of any of my jobs & 11 years flew by in a flash...

And now "Here Comes The Sun King" is in my head.
Thanks for that shot, Steve.
Buh-bye, Boxwoods! Maybe they'll make someone very happy.

when I first moved into the city house 37 years ago, there was a small azalea planted near the driveway where the walk up to the house started. my first night in my new home, someone came and dug it up during the night.

Pretty sure the plants found a good home- when ever I find plants on the street with a "free" sign I take them, nurture them and then they take over!Whoever took them will be temporarily happy...Cute bug!

Never seen a lady bug in that colour.
Like that picture of the rain and umbrellas.