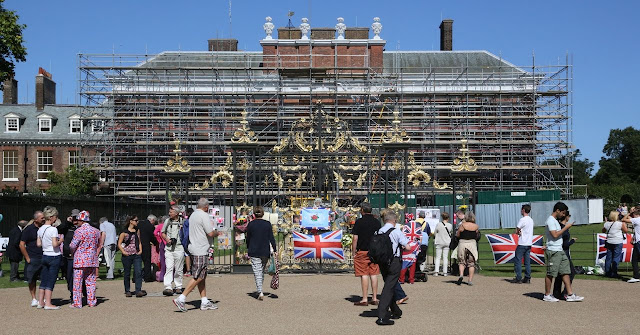 When Olga and I went to Kensington Gardens on Saturday, we happened to wander past Kensington Palace. There, at the gates where mourners gathered by the thousands to bid farewell to Princess Diana in 1997, we found this little knot of people.

Saturday, it turns out, was the 16th anniversary of Diana's death. Amazing that it happened so long ago. I remember where I was when I heard the news -- at a journalism convention in Chicago. As you can imagine, the conventioneers were thrown into an immediate tizzy and many had to leave to go back to work. I remember going with a friend to the loading dock at the Chicago Sun-Times to pick up copies of the paper, fresh off the presses, reporting news of her death. 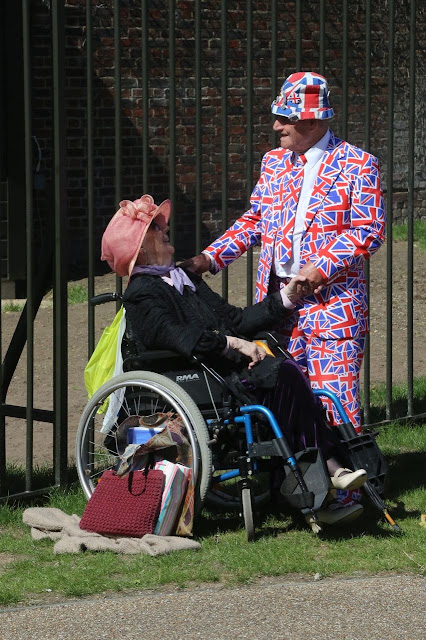 Anyway, this little commemorative gathering featured some eccentrically-dressed characters. This guy appears in his Union Jack suit at many events involving the royals. As I recall, he was also outside the hospital when the newest royal baby was born a few weeks ago. 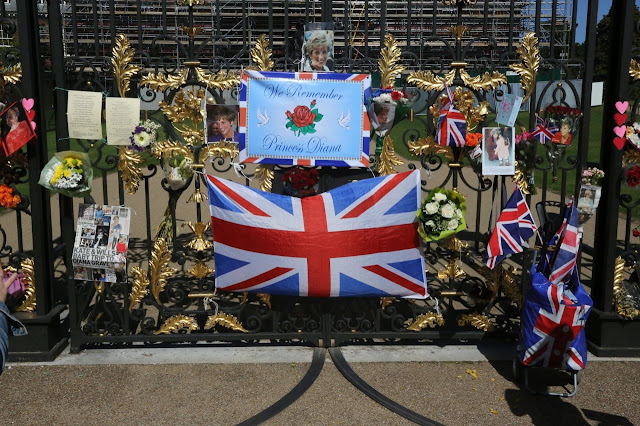 People left messages, flags, flowers and other items on the gates. Remember when I stumbled onto a similar, smaller display on Diana's birthday last year? 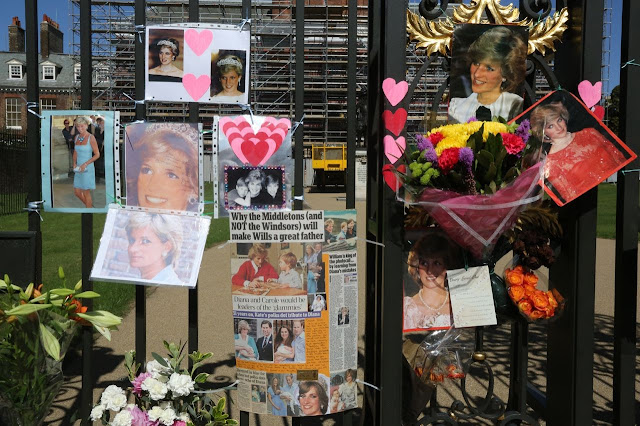 Looking back at that post, I realize I've already told the story about the convention. Oh well. Sorry about that. Some of us get repetitive in our old age!
Posted by Steve Reed at 6:59 AM

One wonders if she would be happy now, had she lived. There was always that sense of profound sadness about her.

re Ms Moon...I don't think anyone who attracts that much press attention is really happy. like having the world peer into your underwear drawer every single day of your life.

Keep telling and re-telling your stories- we are like gold fish in a bowl as we get older- memory not what it used to be- every story, no matter haw many times it is told, is new again!
I, too, feel very sad about Dianna- her life, how ridiculous the royals can be.

what is going on with the palace?

I remember being at a party at a friend's home when I heard the news. The party came to a complete stop.

I remember Mike woke me up to tell me she had died - & I felt so bad because I couldn't believe he had woken me up for that. Guess I wasn't a royal-watcher. I did feel incredibly sad about it though.

I'll bet she'd be over the moon about the new grandbaby. And that makes me sad again!

I've never been a royal-watcher, but I do love seeing your photos and hearing your calm, interesting writing voice describe what you see. That being said, I actually do remember when Diana died, because I was on a plane from NYC to LA and the pilot came on the loudspeaker and announced it!

Ms Moon: It's hard to say. She was certainly forced into a situation not of her own making, and she seemed to be coming into her own after she freed herself from Charles.

Ellen: I could never live in that kind of spotlight.

Linda Sue: I feel sad for everyone involved, the royals included. I'm actually happy that Charles went on to wed Camilla.

Vivian: Kensington Palace has been under a lengthy renovation for some time, so I'm sure this is part of it, but what specifically is being done I couldn't tell you.

Sharon: I bet it did!

Bug: Interesting that he felt like he needed to wake you! The news was just so shocking. She's on the cover of Vanity Fair this month in Europe, partly because of the new baby.

Elizabeth: Thanks for the kind words! It's the kind of news that people felt like they had to spread -- just like Mike waking Bug, as mentioned above. Even the pilot couldn't keep it to himself!