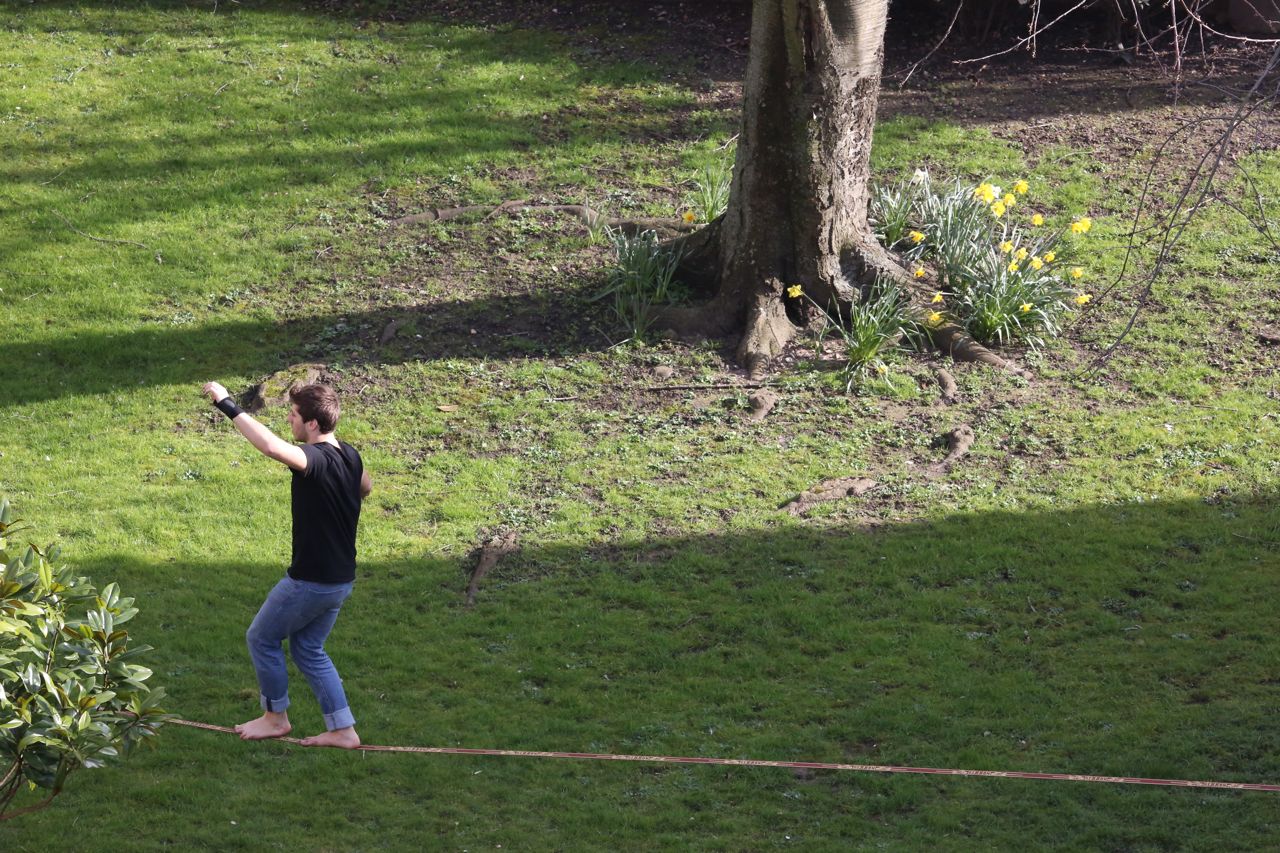 Some guy has recently started stringing up a sort of flat cable between two trees in our courtyard, and then walking it tightrope-style. No one seems to know who this guy is, or whether he even lives in our apartment complex. I suppose one of us should ask him. I hate to sound like Gladys Kravitz, but I'm worried he'll damage the trees.

Colleen and I went to Hyde Park with Olga yesterday, as planned, and spent four hours walking pretty much all the way around the park. We saw the Albert Memorial and the Italian Garden, and stopped at a cafe on the Serpentine for coffee and a sandwich. We let Olga run wild, chasing her Kong and the few squirrels that surfaced for the relatively warm early-spring weather.

At one point, Olga allowed her Kong to roll into the Serpentine, and because I have learned from experience that Kongs don't float (and they cost £18), I stepped immediately into the water, soaking my right shoe, to retrieve it. Then she did it again, and again. A crowd gathered. People laughed. A woman with the white cap of a Mennonite narrated to her small child: "Oh, look, the dog dropped its toy into the water again. Will the man go in after it?"

And then he will walk the toy over to the grass, away from the water, before giving it back to his overexcited dog.

I'm glad I'm every bit as entertaining as a tightrope walker, and probably a lot easier on trees. I've been reading a lot about this Ukraine situation, and I've resisted weighing in, since I must admit I don't know much about that part of the world. But what I don't get is this -- if the people of the Crimea are mostly Russian, as I understand it, and Russia has military bases there, is it really all that outrageous to allow them to hold a referendum on whether to join Russia or stay with Ukraine? I mean, I hate to side with Vladimir Putin, God knows, but that just doesn't seem too crazy to me. I understand that in principal, one country shouldn't be able to intrude into the governance of another country and engineer a referendum -- and I suppose the danger is that the referendum would be manipulated or that this would just be a first step in Putin's generally expansionist approach to governing Russia. But still. If the Crimeans want to go, why shouldn't they?

(As U.S. officials have pointed out, Putin's support for self-determination in Crimea is inconsistent, given Russian opposition to secession efforts in the breakaway republics of the Caucasus.)

On a lighter note, I did repot our avocado tree yesterday, and it seems much happier. I literally breathe easier just looking at it in a bigger pot.

Also, I finally got around to ordering a copy of my friend Kenneth's new memoir, "Wasn't Tomorrow Wonderful?" I worked with Kenneth at The New York Times, and I have long enjoyed his stories of being a young, gay kid growing up in Michigan and Arizona and longing for the bright lights of New York City -- a longing nurtured by reruns of campy '60s TV shows like "Family Affair." (I always wanted their apartment, too!) Knowing Kenneth and his funny, sometimes shocking forthrightness, it will make an interesting read. (I'm alarmed that people younger than me are even in a position to write a memoir, but that's another story.)
Posted by Steve Reed at 6:55 AM